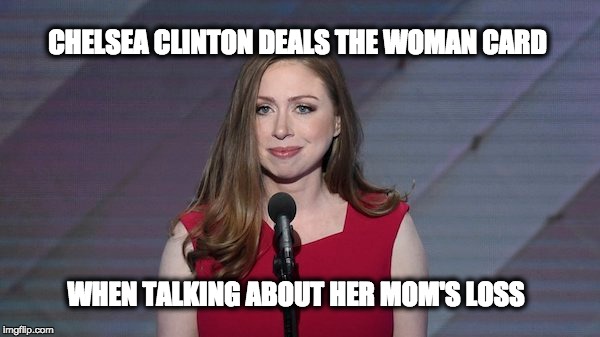 Maybe the Democrats are losing interest in the fake Russia/Trump Bromance story, or the Jim Comey gave away the election because of the email memo excuse, or the media wasn’t hard enough on Trump excuse, the Wikileaks excuse, the electorial college should be eliminated excuse, or any of the other excuses the Democrats came up with since the election— to deflect away from the fact that the reason Hillary lost the election was that she was an awful candidate, who arrogantly thought the rust belt would vote for her, just because she’s Hillary Clinton. Or as Colin Powell once said, “Everything HRC touches she kind of screws up with hubris.”

Apparently the Democrats have gotten so tired of the latest excuses for Hillary’s loss, because they have gone back to the beginning. One of the earliest excuses for Hillary’s loss was that women didn’t want to vote for a woman to be president. The Monday after the election former Clinton campaign communications director Jess McIntosh was on MSNBC claiming that one of the reasons behind Clinton’s loss was women with “internalized misogyny” who couldn’t bring themselves to vote to elect the first woman president.ever  And for a few days, that claim was echoed by other Democratic Party talking heads.

Perhaps the reason Hillary lost wasn’t because people didn’t want to vote for a women, but because her argument that people should vote for he just because she was a woman was ineffective.

The tactic was implemented with massive success by two-term democratic demagogue Barack Obama, whose novelty as the first African American President propelled him not only to the White House, but to instant cultural importance.  Even Clinton’s campaign slogan, “I’m With Her”, was a subtle nod to the women of the nation who the former first lady hoped to woo away from the less corruptible and more popular Donald Trump.

Chelsea Clinton, heir to the Clinton corruption dynasty has an opinion as well.  Not one of her own, mind you, but a very clear repurposing of her mother’s empty campaign message disguised as bigotry.

“The former first daughter, now sucking off the Clinton Foundation teat, says America was just too sexist to vote for her mom. There, she said it. Sorry, not sorry.

“Clinton said she was ‘not surprised’ to see just how sexist America is — which she said she learned by driving around to campaign stops in a limousine before boarding the private jet bound for the next horrible ‘fly over’ spot on the trail.

“’’Im deeply saddened,’ Chelsea said recently, according to Heat Street. ‘I think it’s important for us to realize we can’t take progress for granted. Progress has to be continually defended as well as advanced. I think about this multiple times a day.’

“Her comments came in an interview with Variety, which recently awarded her the ‘Lifetime Impact Award’ (she’s 37, and has done nothing to earn such an award — think of the women out there who are more deserving!).”

Once again, someone who the left keeps shoving a microphone in front of is claiming sexism by using reverse sexism and the threat of being labeled as a bigot to shame Americans.

This is yet another example of democrats pushing the envelope, in terms of political decorum.  Not only are they continuing  to ignore the issues the American people really care about, but they are insulting the very American people they courted for years in a futile effort to stay in the White House, and are now using the same slurs against future voters… that they used against Donald Trump.

The Democrats still haven’t learned the way to win elections is to listen to what the voters really want.

Parts of this post were originally seen at constitution.com