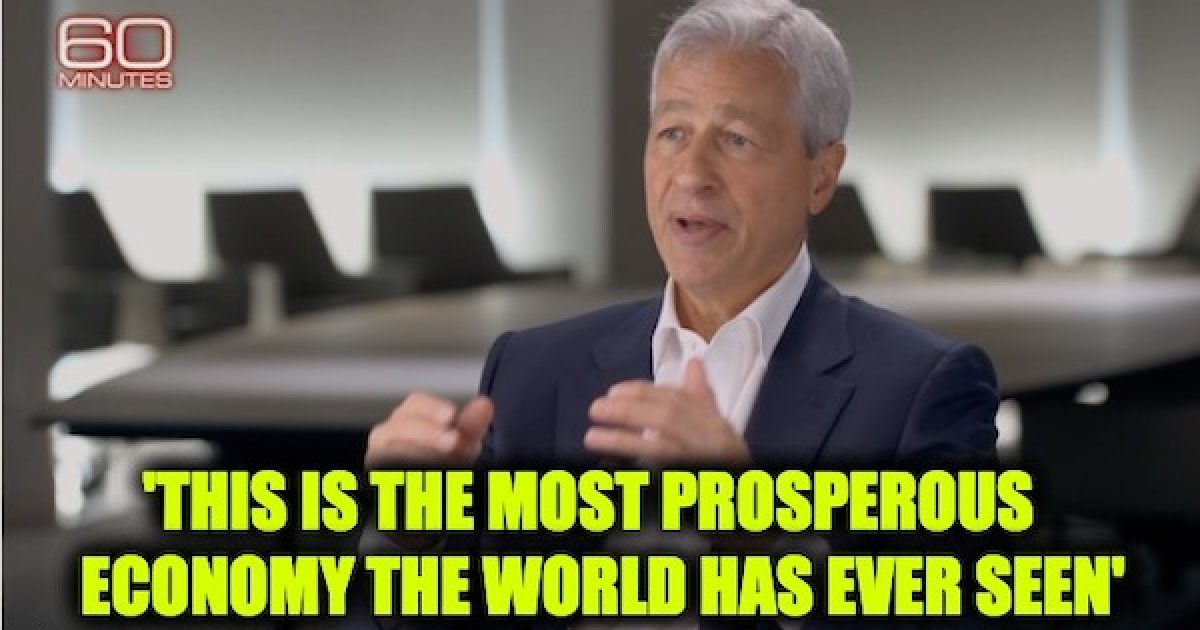 Chase Bank CEO Jamie Dimon had news that Leslie Stahl, the CBS host of 60 Minutes, did not want to hear: “This is the most prosperous economy the world has ever seen.” Though she worked hard at trying to knock him off his statement, it did not work.

Here is a partial transcript  of the interview with Chase Bank CEO Jamie Dimon according to CBS:

Lesley Stahl: The stock market is going through the roof, and yet manufacturing production is down over the past year. Wage growth is slowing. So when you look at the state of the economy right now, what do you see? Do you see strength? Do you see petering out?

Jamie Dimon: The consumer, which is 70% of the U.S. economy, is quite strong. Confidence is very high. Their balance sheets are in great shape. And you see that the strength of the American consumer is driving the American economy and the global economy. And while business slowed down, my current view is that, no, it just was a slowdown, not a petering out.

Lesley Stahl: You sound pretty optimistic about the economy.

Jamie Dimon: Yeah. Well, I am.

Lesley Stahl: Well what about the issue of unpredictability right now on the economy. Is that worrisome to you. It must be worrisome to every businessman in the country.

Jamie Dimon:The world is unpredictable. I think it’s a mistake.

Jamie Dimon: No. If you look at history, if you take a newspaper and open it at any month of any year, you’d have the same list of hugely unpredictable things.

Lesley Stahl: Why doesn’t it feel that way?  Why does it feel as if we were in a particularly uncertain time?

Jamie Dimon: Human nature looks at fear and reacts to the short run. But again there’ve been like 50 or 60 international crises since World War II. Only one really affected the global economy in the short run.

Lesley Stahl: What was that? Vietnam?

Jamie Dimon: No. Vietnam did not. Vietnam obviously totally changed America, but it was the oil crisis in the Middle East in 1973 when oil went from 2 to 20 and we had a global recession. There’ve been wars with India and Pakistan, we got Iraq, Afghanistan, Korea, Vietnam, China had wars with Vietnam, China had wars with Russia. None of those things affected the global economy. And the other thing is: people look at the negatives. There are positives. The Berlin Wall went up, the Berlin Wall came down. So…

Lesley Stahl: And the economy wasn’t affected, is that what you’re saying?

And so another leftist talking point vanishes with the Chase Bank CEO. Every mainstream news outlet promotes a doom and gloom scenario about our economy – it’s going to burst, it’s not green enough, it’s blah blah blah. But Chase Bank CEO Jamie Dimon says different – and he should know.

Below is a video of the full Jamie Dimon interview