Charlie Rose Is So In The Tank For Hillary, He’s Lost Touch With Reality 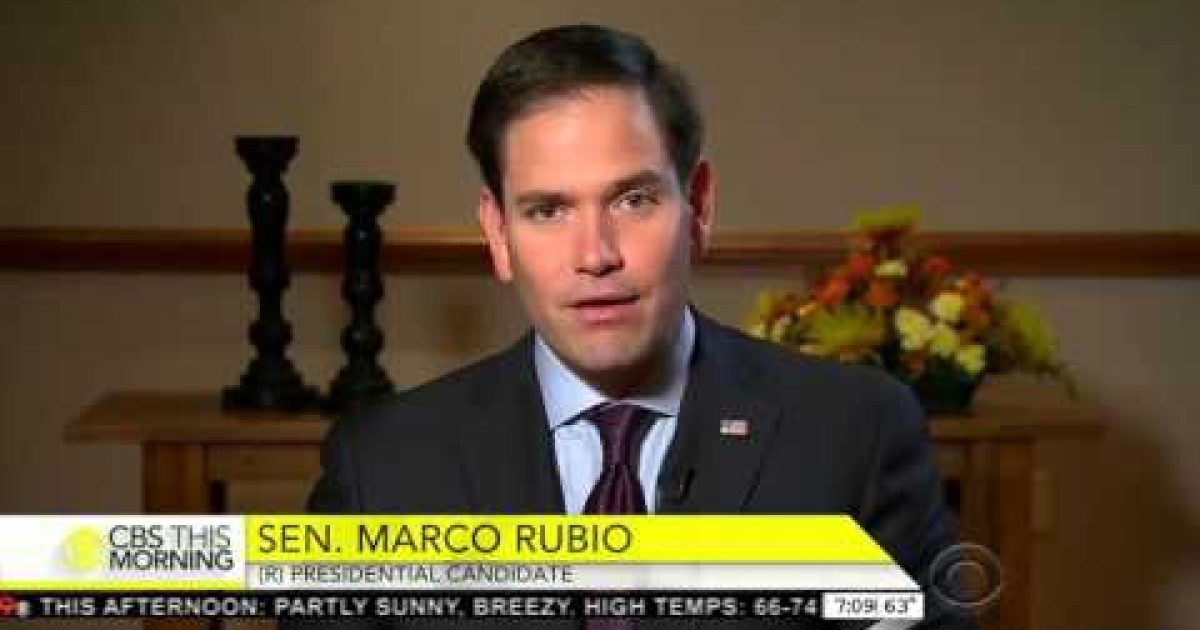 Poor Charlie Rose, he is either so in the tank for Hillary he has lost all concept of reality or the 72-year-old is exhibiting signs that it’s time for him to pack it in and join Dan Rather At The Hollywood Home For Retired Biased Progressive Propaganda Artists. Interviewing Marco Rubio On CBS This Morning after the CNBC debate. Charlie Rose couldn’t understand why Rubio would claim that Hillary Clinton lied about the cause of the Benghazi attack.

Rubio made the claim during the debate in answer to a Trump comment about SuperPACs:

I know the Democrats have the ultimate SuperPAC. It’s called the mainstream media who every single day…and I’ll tell you why. Last week, Hillary Clinton went before a committee. She admitted she had sent e-mails to her family saying, “Hey, this attack at Benghazi was caused by Al Qaida-like elements.” She spent over a week telling the families of those victims and the American people that it was because of a video. And yet the mainstream media is going around saying it was the greatest week in Hillary Clinton’s campaign. It was the week she got exposed as a liar. It was the week that she got exposed as a liar… But she has her super PAC helping her out, the American mainstream media.

Charlie Rose reacted to Rubio’s statement as if the Florida Republican told him that if nominated he would appoint an alien from Jupiter as his V.P., the guy was totally stunned. And when Rubio doubled-down on his claim Rose looked like he was going to start crying “leave Hillary alone!”

But Rose bravely continued, defending Hillary and blaming the CIA (just as Obama would do). “The CIA was changing its own assessment of what happened there,” Rose said.

But Rubio stood his ground against Rose “That’s not accurate,:”

“What was very clear is that from the very early moments of that attack she knew that it was a terrorist attack, as she shared by email with various people, and yet she continued to perpetuate the lie that this was something —”

Poor Charlie, obviously missing his morning meds couldn’t comprehend why someone would do that.

“If you’re calling her a liar by saying she perpetuated a lie, then why do you think she did that? What was her motive?’

Rubio remaining more polite than warranted, blamed the falsehood on the fact that the 2012 presidential election was less than two months after the attack and telling the truth would ruin Obama’s narrative about how al-Qaeda was on the run.

Rose looked like he was going to have a heart attack from the shock, “You are saying, senator, that Hillary Clinton lied because she wanted to help Barack Obama in his re-election campaign. That’s a serious charge.”

Instead of slapping Rose atop the head in an attempt to bring him out of his stupor, Rubio simply answered, “Yes. Well, it’s the truth,That’s not only why she did it; that’s why everyone in the administration did it. They didn’t tell the truth of what truly happened, and the families of those victims deserve better.”

Watch the video of the conversation below, but first swallow anything in your mouth (otherwise Charlie Rose will make you laugh it out through your nose).