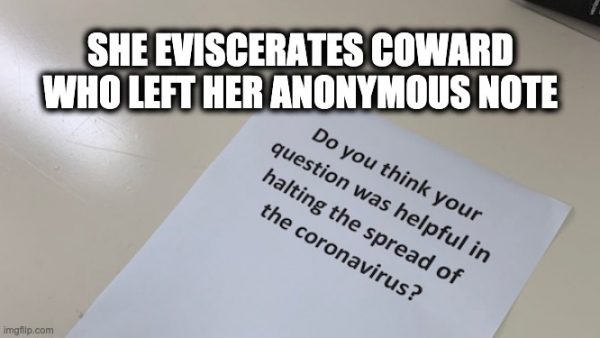 Earlier this week, President Trump took a question from OAN’s Chanel Rion regarding the partisan liberal media’s claim that calling the coronavirus a “Chinese” virus is racist.

Trump takes question from far-right OAN personality who asks if term "Chinese food" is racist, mocking those who take offense to him calling COVID-19 a "Chinese virus."

She claims the media is using "Chinese communist party narratives."

This prompted someone to cowardly leave an anonymous note on her desk, asking: “Do you think your question was helpful in halting the spread of the coronavirus?”

Someone left this note for the OAN personality at the White House: “Do you think your question was helpful in halting the spread of the coronavirus?” pic.twitter.com/Jy8rzVs5Y0

Rion responded to the coward who left the note with a scathing letter shredding the corrupt, lying liberal media:

“Questions don’t halt or advance viruses, and can’t of course, but fake news and fake accusations against President Trump made by agenda-driven scribblers like you, advance public panic ABOUT viruses and in retrospect, the panic will prove worse than the virus — my question spoke the very truth you work every day to suppress, to wit:

“This president acting with remarkable efficiency under extraordinary pressure in a (sic) unprecedented crisis works tirelessly to quell panic while leftist media, in New York and in the White House basement, determined to reinstall the wretched Obama by re-electing the dithering Biden are inciting public panic and hindering President Trump’s Herculean crisis management effort,” she wrote.

“If all America had to fear was fear itself, that would be far better than America having to fear a corrupt partisan media that constantly lies, suppresses, manipulates and invents facts and obscures facts and sources to invent its own agenda-driven leftist narratives,” she added.

“I don’t give a damn about whether the presumably delicate sensibilities of the murderous Chinese Communist Party are offended or not – and apparently neither does President Trump.  It’s the Chinese Virus forever and you are the fake news forever.

“You lose because you lie and when fake news loses, America wins.

“And yes, Anonymous, I’m talking about you,” she said in conclusion.

The response was pretty much what you’d expect:

Way to go Chanel; you’re kicking ass & taking names! God bless you for being a strong Conservative.; and speaking out. Keep up the great work!!