Celebrity T.M.I. Of The Year: Whoopi Goldberg, ‘I Just Wanna Get Laid!’ 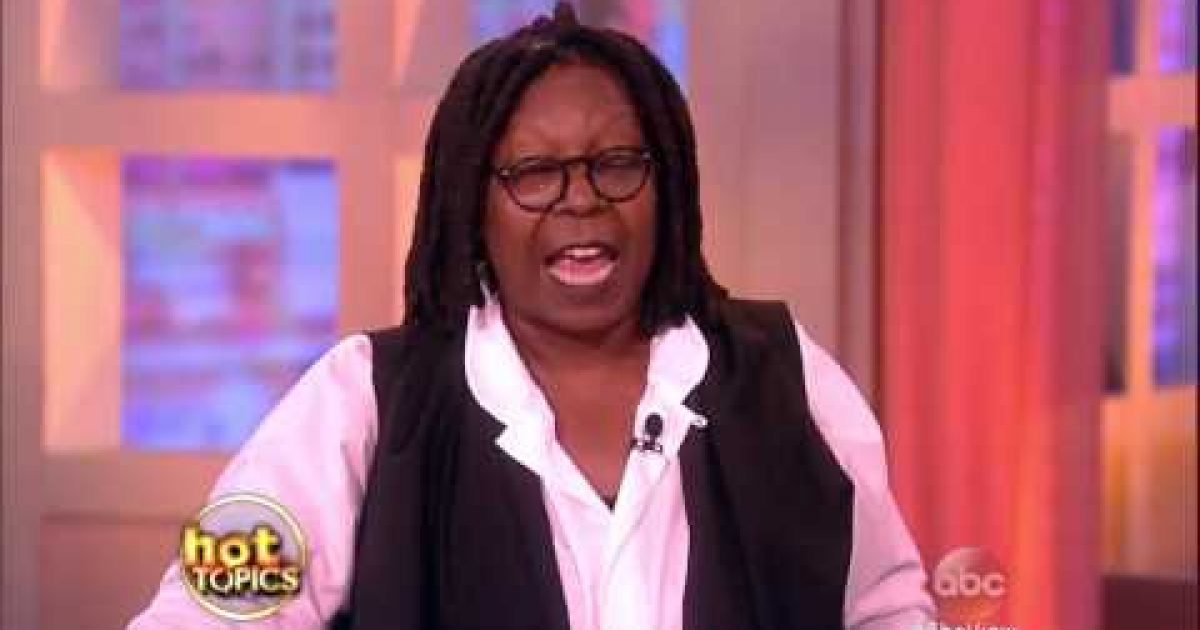 The past few days we’ve tried to provide a clear picture of what’s occurred in 2015 with posts such as, our top 50 posts, the year in Hillary, the year in the global warming, and the Iran deal, and there will be more during the next two days. But there is one person who deserves special recognition; Karen Elaine Johnson, who goes by the “nom de plume” of Whoopi Goldberg. Twice during the past year she’s blurted out comments which, to be quite frank, created a mental picture that still cannot be scrubbed from my sub-consciousness.

Doctors say that the only way to get rid of bad memories is to discuss them, therefore permit me to inflict upon you dear readers, this special 2015 Celebrity Too Much Information of the Year post all about Whoopi Goldberg. During the past twelve months, Ms. Johnson/Goldberg told television audiences she “just wants to get laid,” and warned the opponents of Planned Parenthood to “get out of my vagina.”

The final episode of ABC’s “The View,” in May 2015 ” Whoopi Goldberg gave a monolog that some might say was the absolute definition of T.M.I.  exclaiming that sometimes she just wants to have no strings attached sex, or to use her words, “I don’t want to have your kids, I don’t want to meet your family, I just want to get laid”

The panel was discussing a website for people looking to have casual sexual hookups, as Whoopi explained:

You know what, a dating site for people looking for open relationships found that 40% of their users are between the ages of 18 and 35. Now, that I found kind of shocking. I mean I understand why people my age do it but I’m shocked that folks this young are doing it.

When another panelist pointed out, there is a “difference between a relationship and sex,” Whoopi launched into her sexual soliloquy to the applause of the audience.

There is a big difference. Sometimes all you want is sex, okay, I’m sorry, I know this is — no, no, no. Let me just reiterate by saying as I always do, keep your e-mails and your tweets and stuff to yourself ’cause I don’t care. But, you know, I used to get in big trouble on this show all the time because I said, you know, I don’t want a relationship. Sometimes I do want sex and I don’t mind a hit-and-run.  But that’s — because I don’t want to have your kids, I don’t want to meet your family, I just want to get laid. And people — people think, you know, I know more women who are like that because they’re like, look, when I’m looking for him the sex is what comes secondary because if he’s a bone-head, I don’t know if I want him. I just want to take care of that itch and move on.

The entire sequence can be seen in the video below, then continue reading…

On the September 21st episode of the The View Whoopi Goldberg made a request which the vast majority of Americans are totally happy to comply with, “Get out of my vagina!” Actually the thought of not complying made me throw up in my mouth a bit. “The View” maven Goldberg weighed in on the newly revived Planned Parenthood debate, and Carly Fiorina’s statement which “The View” called a  lie.

During the debate, Fiorina describe a video featuring a fully formed fetus kicking on a table, while Planned Parenthood employees discuss harvesting its brain. To be honest, I have seen all the videos and kind of remember the discussion,  but I refuse to go back into the videos to find if they actually showed the baby on the table. Even if it was only a discussion, there were too many other disgusting  shots of dead babies and baby parts to want to see any of the videos a second time. Lets face it those videos are some of the few things in this world that are actually more disgusting than the idea of being in Whoopi’s vagina, heck the videos are even grosser than the thought of being inside Joy Behar’s.

Whoopi believes that abortion is what God wants,  “God said, ‘Come to me; if you have an issue, come to me. Nobody else can judge you” (but Whoopi he also said, “Don’t Murder”).

During the discussion,  Whoopi exclaimed, “If you think this [de-funding Planned Parenthood] is going to stop women from doing it, it’s not. People who are desperate enough to go and get an abortion, there’s a reason they need it,” Goldberg declared. “Get out of my vagina!”

Whoopi I don’t want to pay for Planned Parenthood so get out of my wallet!

I know anything to do with Whoopi’s private parts are kind of a gross thought, so quickly watch the video of her outburst is below:

Important note: As mentioned above Whoopi Goldberg is a stage name. Her birth name is Caryn Elaine Johnson – in other words, despite using the stage name Goldberg she isn’t, nor has she ever been Jewish. I only mention that because, by using that stage name, some people might blame her craziness on the Jews. In fact in the interest of tolerance and preventing Anti-Semitism, I am asking Ms. Goldberg to consider changing her stage name.

Whoopi, it’s true that the the Jews are supposed to be the “chosen people,” but how about choosing someone else for a change? The Jews already have their fair share of famous embarrassments. Do you know how hard it is every Father’s Day for Jews to see Woody Allen walk around with his wife/daughter? We have to take the blame for people like Courtney Love, David Axelrod, Al Franken, the obnoxious half of Geraldo Rivera, and both Bernie Sanders and Larry David.

For heaven’s sake Ms Johnson, please get rid of the Goldberg!!

Come on Whoopi, why pick on the poor Jews? Try one of these names on for size:

Hey I got an Idea!  Why don’t you change your name to Whoopi Ayatollah Seyyed Ali Khamenei? It fits nicely; they could even call you Supreme Leader like they do with  Khamenei in Iran. Heck, you make that name change President Obama will bow down to you and give you anything you want. Wouldn’t that be cool? Give it a try! Or try anything else! But lose the Goldberg.