Catch-And-Release Of Illegals Up Almost 440,000% Under Biden 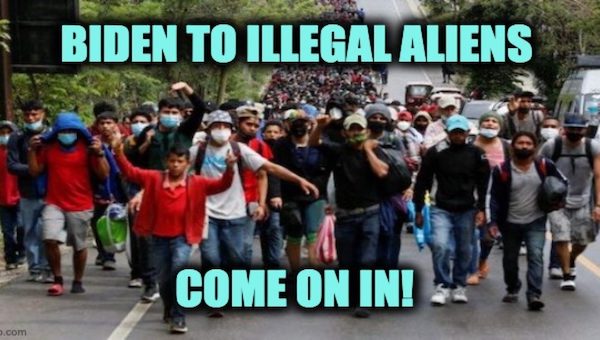 The practice of catching and then releasing illegal aliens at the southern border has risen by an unbelievable 430,000 percent over last August under Joe Biden. In August of 2020, when Donald Trump was still in control, the U.S. Border Patrol caught and released ten illegals.

Mark Morgan, who was Trump’s acting head of Customs and Border Protection, slammed Biden for essentially telling illegals that they won’t have any barriers to free entry.

The Times added that things on the border have changed wildly since Trump left office. The paper compared two months under Trump to Biden’s.

Still, 23% were caught and released at the border and 15% more were caught, turned over to ICE and given notices of court dates.

Most of those were held about 25 days then released, according to the Transactional Records Access Clearinghouse.

Biden’s reps tried to blame other countries for the onslaught of illegals.

But the truth is that Biden’s open-door policy is what caused the higher number of illegals. In fact, Caravans started making their way up to the United States in mid-December, anticipating Biden’s open doors.

Two days before the Biden inauguration, an illegal Honduran traveling in a caravan of thousands to the United States told The Hill he was making the journey because Biden “is going to help all of us.”

Honduran migrant: President-elect Biden is "going to help all of us." pic.twitter.com/LkrVCsXcSb

Heck, in March, some of the Illegals showed up at the border wearing Biden T-Shirts:

Who is funding this?

Beginning with his first day in office, Biden canceled the Trump that actually worked. For example, they stopped the construction of the border fence, They canceled the remain in Mexico program, and despite the SCOTUS ruling, the program to be restarted remains inactive.] Other programs were also killed.

Biden took what Trump got down trickle and in less than nine months and turned it into a tsunami. Just look at the numbers above, and it’s about to get much worse. According to NBC News, team Biden is quietly preparing for an unbelievable number of migrants heading to the U.S. in October.

If the number of aliens illegally crossing the border is at record levels, why doesn’t the President simply reinstate the Trump programs that actually worked? It may be because the Democrats see Illegal aliens as future voters for their candidates, or it may be something much simpler than that.  In the minds of Joe Biden’s socialist handlers, anything program created by President Trump has to be canceled because “orange man bad.”
Parts of this post was first seen at Flag and Cross
Facebook Twitter Flipboard