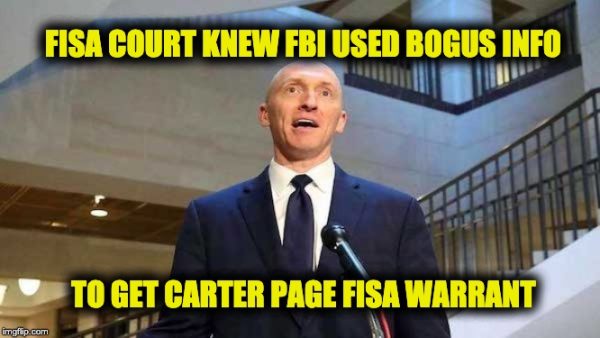 After the Horowitz report was issued, Judge Collyer, head of the FISA Court, ripped the FBI for the falsehoods used on applications to wiretap former Trump campaign aide Carter Page. The judge ordered the agency to come up go through their FISA warrants to find any other abnormalities and recommend solutions to prevent falsehoods from ever happening again, all by January 10th. But is Judge Collyer and the FISA court just as culpable as the FBI?  The court was provided multiple warnings since 2016 that the warrant application process, especially in the case of Carter Page was providing the courts with false information.Carter Page warrant falsehoods

On October 24, 2016, NSA Director Admiral Mike Rogers told Judge Collyer of the FISA court that there were significant issues with the way the NSA was complying with its minimization procedures.  This was three days after Judge Collyer approved the FISA warrant to spy on Carter Page:

“On October 24, 2016, the government orally apprised the Court of significant non-compliance with the NSA’s minimization procedures involving queries of data acquired under Section 702 using U.S. person identifiers. The full scope of non-compliant querying practices had not been previously disclosed to the Court.”

Rogers appeared formally before the FISA court on Oct. 26, 2016, and presented the written findings of his audit (Page 4, 14 & 19 of Court Ruling & Senate testimony).

Note: per the Lawfare Blog, minimization procedures are how an agency gets rid of the information “it inadvertently sweeps up that it is not allowed to collect. All bulk collection necessarily sweeps more broadly than legitimate foreign intelligence against legitimate targets, so the intelligence community has long used minimization as a way of limiting itself post-acquisition to those materials that fall legitimately within its purview.”

Why didn’t Admiral Rogers’ appearance raise questions about what the Judge had signed three days earlier?  Did she even read the Carter Page warrant–it or did she just sign/rubber stamp it? Perhaps she was used to approving spying on presidential campaigns?

In 2017,  Landmark Legal Foundation, a Law Firm that has Mark Levin as Chairman tried to bring the issue to the Court:

More than 2 1/2 years ago, Landmark Legal Foundation asked the Foreign Intelligence Surveillance Act (FISA) Court to investigate the FBI’s misconduct in obtaining warrants to investigate, among others, Carter Page. At that time Page was a private citizen and former Trump Campaign advisor who had been targeted for surveillance based on what appeared to be, and in fact, was false and politically motivated FBI statements.

Landmark urged the FISA Court to direct the Department of Justice to investigate the FBI’s conduct. We also requested an Inspector General’s investigation. In addition, the Foundation recommended court-ordered investigations by other surveillance organizations to see how widespread the corruption was in the Obama Administration.

But, the FISA Court, through its presiding judge, U.S. District Judge Rosemary Collyer, refused Landmark’s request, even though the Foundation pointed out that federal courts have inherent authority — and the duty — to investigate misconduct in judicial proceedings.

“Over the course of our congressional task force’s review into certain investigative and prosecutorial decisions made by the FBI and broader Department of Justice surrounding the 2016 elections, concerns have mounted related to the veracity of information presented before the FISC,”

“As the Presiding Judge of the [Foreign Intelligence Surveillance Court (FISC)], you are privy to information which could potentially verify or contradict our understanding of abuses of the [Foreign Intelligence Surveillance Act (FISA)] process,” North Carolina Rep. Mark Meadows wrote in a letter Monday to Judge Rosemary Collyer. “Ultimately, to protect the integrity of the process, we believe such an investigation is necessary…We write to encourage you to investigate the possibility FISA has recently been weaponized for political means,” added Meadows,

His full letter can be found here.

Kimberly Strassel of the WSJ reported that twice in 2018, Rep Devin Nunes sent a letter to Judge Collyer aking about the Carter Page warrant. The first time (Feb.), he asked the actual court hearings about the application for the warrant. Four months later, Nunes sent her another letter. This letter told the Judge that he uncovered evidence that the DOJ may have provided bogus information to the court regarding the Carter Page warrant application. Judge Collyer responded to each letter by blowing Nunes off.

On Feb. 7, 2018, Devin Nunes, then chairman of the House Intelligence Committee, sent a letter to Judge Collyer informing her of its findings in his probe of the FBI’s Page application. He wrote that “the Committee found that the FBI and DOJ failed to disclose the specific political actors paying for uncorroborated information” that went to the court, “misled the FISC regarding dissemination of this information,” and “failed to correct these errors in the subsequent renewals.” Mr. Nunes asked the court whether any transcripts of FISC hearings about this application existed and if so, to provide them to the committee.

Judge Collyer responded a week later, with a dismissive letter that addressed only the last request. The judge observed that any such transcripts would be classified, that the court doesn’t maintain a “systematic record” of proceedings and that, given “separation of power considerations,” Mr. Nunes would be better off asking the Justice Department. The letter makes no reference to the Intelligence Committee findings.

What her letter left out was exposed by Judicial Watch in August of the same year.  There were no hearings about the Carter Page warrant application.

Mr. Nunes tried again in a June 13, 2018, follow-up letter, which I have obtained. He told the court that Congress “uncovered evidence that DOJ and FBI provided incomplete and potentially incorrect information to the Court,” and that “significant relevant information was not disclosed to the Court.” This was Mr. Nunes telling FISC exactly what Inspector General Michael Horowitz told the world—18 months sooner. Mr. Nunes asked Judge Collyer to “initiate a thorough investigation.” To assist her, the same month he separately sent FISC “a classified summary of Congress’s findings and facts” to that point. The letter was signed by all 13 Republican members of the Intelligence Committee.

Judge Collyer blew him off. Her letter on June 15, 2018, is four lines long. She informs Mr. Nunes she’s received his letter. She says she’s also received his classified information. She says she’s instructing staff to provide his info to “the judges who ruled on the referenced matters.” She thanks him for his “interest” in the court.

Why did Judge Collyer seem surprised in December 2019 when the Inspector General Horowitz reported the same information that Rep. Nunes told her in June 2018.  Why did she ignore warnings in 2016 and 2017 as well as 2018?

The truth is that Judge Collyer and the FISA court is just as culpable for putting the U.S. through the Russiagate nightmare as the FBI. Judge Collyer allowed Carter Page to go through three years of personal hell, despite the fact he was an honest public servant. Was she biased, lazy, or just protecting her turf? In the end, it doesn’t matter. Her job was to protect the freedom of Americans–she failed.

Judge Collyer resigned her position as presiding judge on the FISA court as of Dec. She will remain as a Judge on the court until her term ends in  March 2020. According to reports, she’s dropping the Presiding Judge responsibilities because of health reasons. But—well—you decide.