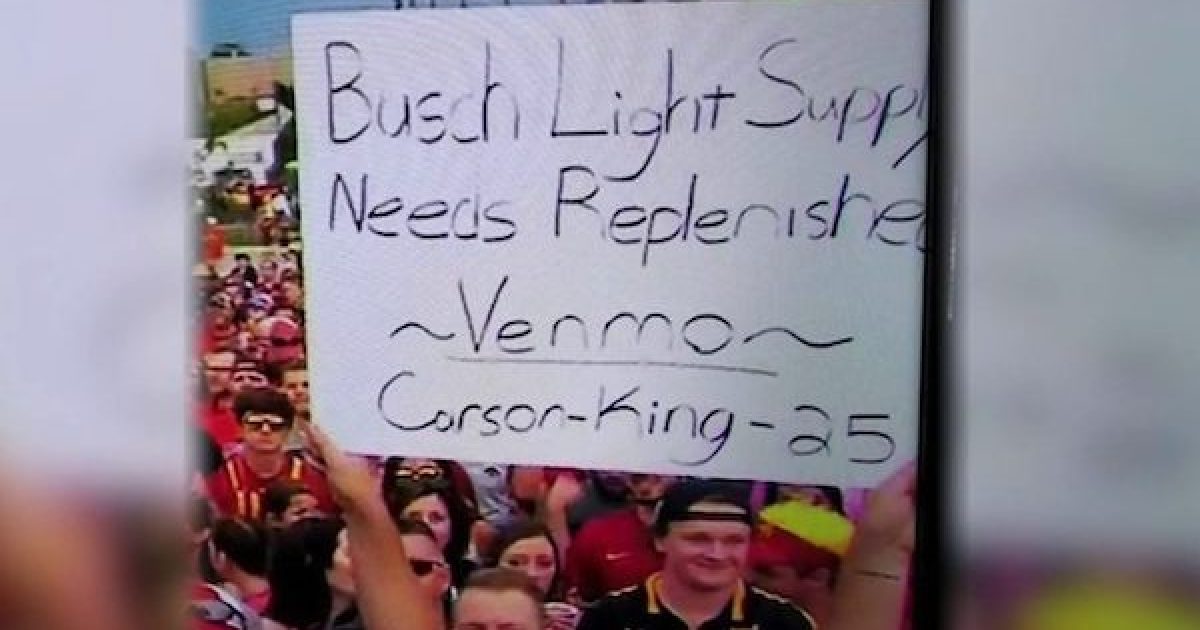 Carson King, the football fan whose sign begging for beer money went viral, was stunned that he ended up with nearly one million dollars to donate to charity.

ISU football fan Carson King ended up on ESPN’s College GameDay with an amusing sign about his need for some beer money.

The ESPN cameras caught King’s sign, and soon enough, it caught the eye of the Internet, too.

King soon found that people all across the nation decided to help out.

Thousands of people heard King’s call and donated to the beer fund. So many donated that King soon realized that he simply could not keep it all.

So, he decided that he would donate the cash to the University of Iowa’s Children’s Hospital.

His phone immediately blew up with notifications from Venmo, King told CNN. Within 30 minutes, the 24-year-old had raised $400.

I didn’t think I would make anything, it all started as a joke,” he said.

After speaking with his family, he decided that, minus the cost of one case of Busch Light, he’d give the rest of the money to the University of Iowa Stead Family Children’s Hospital.

As word spread of his plans to donate the money, more people decided to contribute. Busch Beer and Venmo even caught wind of his plans, and raised the stakes by pledging to match his contribution.

With all the donations my @CollegeGameDay sign for @BuschBeer has received, I will be donating all but enough for a case of Busch Light to @uiowa Children’s Hospital. We’re at over $1,600.00 right now! @CycloneATH @WideRtNattyLt @ChrisMWilliams Venmo Carson-King-25

Busch Beer also decided to jump in after King announced his charitable contribution.

.@CarsonKing2 this is the best thing we have read all year, we’re inspired.

We’re going to match your donation to University of Iowa Hospitals & Clinics, and we’ll throw in some of that Busch Light you were looking for. https://t.co/NPPrPp6zJg

Even donation platform Venmo pledged to match the donation:

We see a lot of great stories, but this is one of our favs @CarsonKing2. Count us in for matching the donation to the hospital, too. #ftk?@BuschBeer @CollegeGameDay https://t.co/thS8JXOXC3

By Sunday morning, the contributions — including Busch Beer and Venmo’s matches — had reached $1 million, and were continuing to rise.

We can’t think—our minds are blown by all of this! ? Thank you to everyone who helped reach this milestone! We’re so grateful! ?

Busch Beer had one more surprise for the generous college student: Beer for life!

Hey @CarsonKing2, we said we’d send you a year’s worth of Busch Light, but first we had to make sure the cans were fit for a King. Let us know where to send the truck. #IowaLegend pic.twitter.com/czGBuXRE92

Carson King was on Fox and Friends Saturday when the haul was only $800K and admitted that this mom wasn’t exactly enamored with her son’s stunt.

“My mom heard the idea, and she’s like, ‘Oh my gosh, my son’s going to be on national television asking for beer money,’ you know, proud mom moment,” he joked.