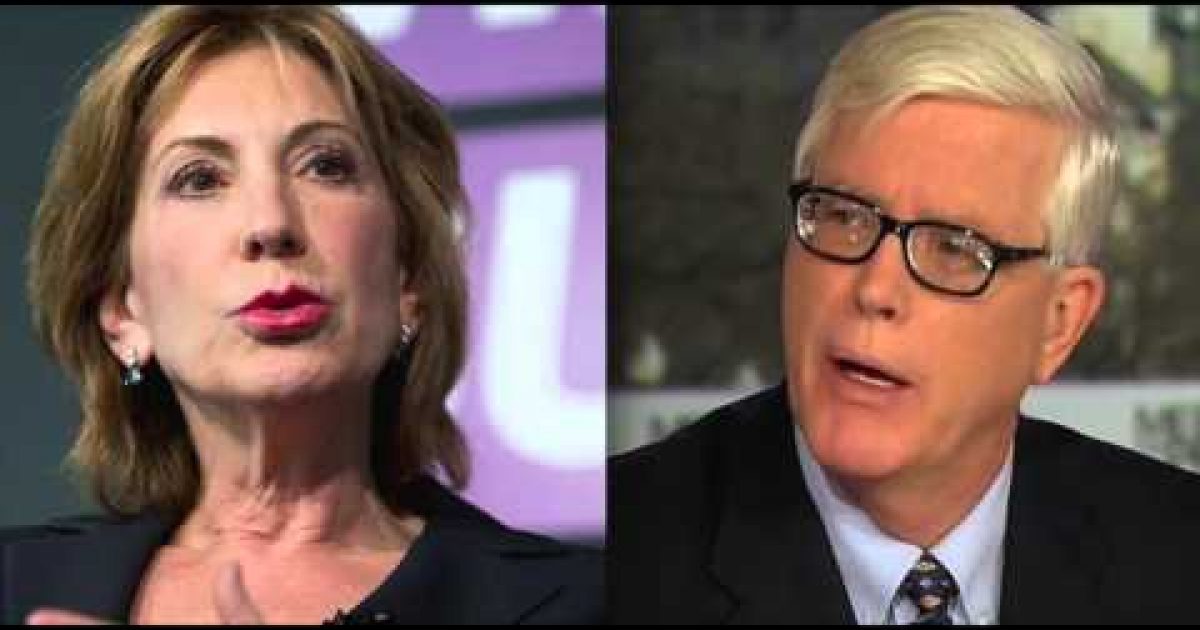 Carly Fiorina was a guest on Tuesday’s Hugh Hewitt Show and a major part of the discussion was Barack Obama’s foreign policy failures.  According to the possible GOP Candidate Obama is a lousy negotiator, draws false moral equivalences, and has no idea how to set foreign policy objectives:

Hewitt: He has been giving the false impression they have this all resolved. But Carly Fiorina, whatever he is proposing there, and I don’t want to use a straw man, it sounds like he’s saying that Russia has agreed to forgo their Security Council veto. President Putin has not exactly been following President Obama’s lead in the last three years. Do you put any stock whatsoever in the reliability of this assurance that we’ll work this out?

Fiorina: No, absolutely not. But I also think that President Obama’s perhaps gravest mistake is when he took a victory lap in the Rose Garden around this framework of a deal, because what he has signaled to the Iranians is he must have this deal at all costs. He not only was unwilling to ever walk away from the table, rule number one, if you want a good deal, walk away from the table at least once. Rule number two, never commit yourself publicly until you actually have the deal you want. And President Obama is now committed publicly. So my prediction is that unless Congress intervenes, which I desperately hope they will, what Iran is going to spend the next two months doing is making this deal, which is already very good for them, even better for them, because they now know that President Obama has committed the entire prestige of his office to getting this deal done.

Fiorina: I have done a few negotiations, yes.

Fiorina: This president is hopeless on negotiations from what I’ve observed over the past six years, and I think he really honestly believes that it is the eloquence of his presentation alone that will change minds and move hearts. And of course, he’s up against people who are prepared to take advantage of that sadly, you said it earlier, it’s an egocentric view of the world, and it’s not a realistic view of the world.

Hewitt: Carly Fiorina, in the interview he did with Thomas Friedman on Sunday, the President had this astonishing statement to make, cut number three:

Fiorina: Exactly, and this is the, he is always engaging in moral equivalence. He has compared what Hamas does to what the Israeli state is doing to protect its citizens. He engages in this all the time. You and I have had this conversation. On top of everything else, he lacks moral clarity. And for him to equate Iran and the United States in the way that he does in that statement says all we need to know about where his head is in terms of this negotiation.

Hewitt: Now critics of the critics have said, I was reading one by Eric Black today, a fine reporter in Minneapolis, saying what’s the alternative? The alternative is war. I need to follow up with Scott Walker, I need to follow up, I assume, with you. I hate this deal, because it can’t be verified, it cannot, it doesn’t lead to disarmament. It’s a, for all the reasons you hate this deal, there are lots of alternatives, Carly Fiorina, but what do you think they are?


Fiorina: Well, of course there are alternatives, and this is the false choice that President Obama always presents to us. There’s nothing we can do in the Middle East unless we go to war. There’s nothing we can do to push back against Russia unless we go to war. And of course, the one thing we could and should be doing in all of those circumstances is supporting our allies as they have asked us to. So we would support Israel by stopping talking to Iran now. You know, it’s amazing to me, President Obama laid out a very clear set of goals for this deal when this process first started. Not a single one of those goals has been achieved. So not one of their nuclear facilities is being taken apart, including the one buried in the mountain, not one of their 19,000 centrifuges is being dismantled. Yes, supposedly, they’re reducing some of their nuclear material, but now, they’ve decided no, we’re not willing to ship it out to Russia. That was an agreement made years ago they would ship it out to Russia. No, now they’re reneging on this. The truth is this is a terrible deal, and we should immediately impose sanctions, frankly, with or without the international community. You know, it’s interesting, President Obama’s administration announced just in the last, I think, 24, 36 hours that they were going to unilaterally cut off access to the financial system against those nations or individuals that engaged in cyberterrorism or cyberwarfare. There’s a good idea. Why don’t we cut off Iran’s access to the financial system? We have huge influence over the financial system. There are many things that we alone could be doing to signal to Iran we are not going to sign a bad deal. We will only sign a good deal. So we are going to walk away from the table for a while, while you think about it, and let your economy devolve into tatters once again, which is what brought you to the table in the first place.

Hewitt: No one comes for years, and then all of a sudden, Jeb Bush, Carly Fiorina, Scott Walker, they’re all showing up. What a surprise, people start running for president, they want to be on the radio, and I’m so glad you did. Carly, I want to go back to the Iran deal, because this is the number one deal. Would you repudiate it as far as we, it’s not really a deal. It’s a hologram. But if it’s, as far as you understand it, would you repudiate it on day one?

Fiorina: Absolutely, because literally, Iran got everything they wanted, and we got nothing that we wanted, as established by our president when he first set out the goals. So as I just mentioned, none of their nuclear facilities are being dismantled, none of their centrifuges are being taken apart. Oh, they’re promising to reduce some of their nuclear fuel, but of course, they’ve never really agreed to inspections, and suddenly we think they’re going to agree to inspections? This is a regime that has a strategy over many decades to disrupt the entire region, and to gain nuclear weapons. And that’s the strategy they’re on.

Hewitt: The President on Sunday said he was personally troubled by criticisms of him being anti-Israel, and of not caring about the Jewish people. Again, it was a tremendously egocentric comment, not a mature comment, I think, not a comment that presidents make, that you don’t take this stuff personally if you’re president. But what do you think he thinks of Israel, because he’s clearly the least supportive president of Israel that we’ve ever had, and some people objectively believe, not what he says, but what he does to be anti-Israel.

Fiorina: Well, I think there’s no question that the very difficult state that our relationship is in with Israel is in no small measure due to President Obama. It’s a series of things. It’s a series of criticisms of Israel in the middle of negotiations. It’s threatening to go to the U.N. and side with the Palestinians in their quest at the U.N. it’s a refusal to meet with Bibi Netanyahu when he comes to this country. I remember sitting in Bibi Netanyahu’s office five years ago, a private meeting, just myself and my husband, Frank. No press, no elections, and Bibi was talking then about the grave danger that Iran represents. He came here not to poke a stuck in Obama’s eye. He came here because he needed us to hear. And when a president in a fit of pique refuses to meet with a prime minister at a critical moment in both of our nations’ history while this deal making is going on in Geneva, of course, people in Israel take that personally. I would, too.