Carly Fiorina “I Look Forward To Discussing And Debating With” Trump 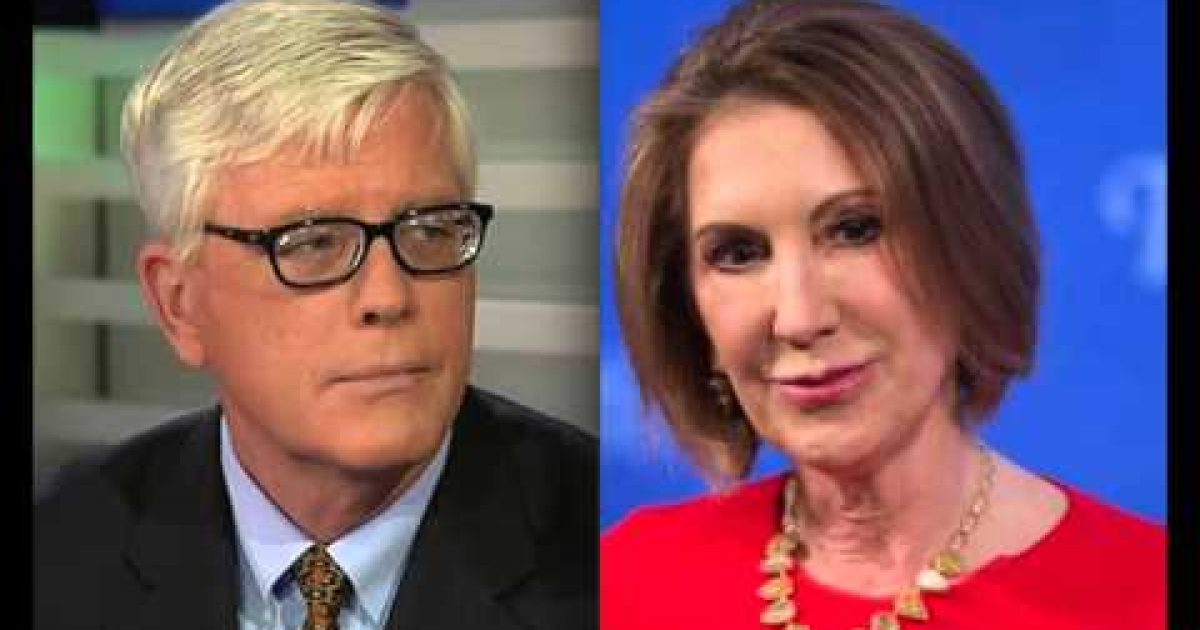 One of the first media appearances made by Carly Fiorina after CNN announced the rules change for the second GOP debate was the Hugh Hewitt Radio Show. Hugh who along with Jake Tapper will be the moderator of the CNN debate asked Ms. Fiorina about why she thought CNN finally made the change and of course how she felt about being on stage with “the Donald.” Then the conversation turned to the the Kentucky county clerk who is continuing her refusal to issue same-sex marriage licensees despite a court order.

Below is a transcript of and videos of the interview:

Hewitt: So pleased to bring you breaking news. CNN has amended its rules for the debate in which I will participate as a panelist on September 16th, and the person most likely to benefit from that amendment is joining me now live on the line, Carly Fiorina. Hello Carly. Welcome. It’s good to have you back.

Hewitt: I think CNN made a very solid news decision. I have Mark Preston coming on after the break to discuss it. What’s your reaction on how does it change – if anything – what Carly Fiorina is doing to prepare for the Reagan Library debate?

Hewitt: Does this instantly become a Trump-Fiorina showdown?

Fiorina: I don’t know about that, but certainly Trump is the front-runner. He is someone that I look forward to discussing and debating with.

Hewitt: Now since the announcement was made by CNN about an hour ago. I’m sure you’ve been deluged with calls from all the national news media. Did their amendment explanation make as much sense to you as it did to me?

Fiorina: Well it does make sense because what they basically acknowledged is that in this particular cycle unlike, apparently, other cycles, there was just too few polls after the August 6th debate as compared to the number of polls before the August 6th debate. We can argue about whether national polls are the right polls. I happen to think state polls are more relevant because – after all – we have a state primary system, not a national primary system. On the other hand, a poll came out today – PPP – I’m number four. It’s pretty clear that I’m in the top five. And so, I think they made the right decision based on the data which clearly has shifted – in my case – dramatically, from prior to August 6th to post-August 6th.

Hewitt: Now Carly Fiorina, are you doing debate prep in the classic style of the murder boards they’re called, where you have eleven people on the stage and three people playing the panelists. Are you doing that?

Fiorina: No. Not in that sense. That’s a lot to try and simulate. I think I would probably use a very similar practice as the one I used last time which is that there a whole set of issues that I will want to become more educated about. There’re a series of questions that I will have think through my answers to. The truth is, you don’t exactly what exactly you’re going to be asked. The truth is, you need to be able to respond in an authentic and straightforward manner no matter what you’re asked. And the truth is, you have to able to roll with the punches and go where the conversation goes.

Hewitt: And let me close our conversation by throwing a hard one at you. There’s a Kentucky county clerk today. He’s refusing to issue licenses to same-sex marriage couples. She’s in contempt of court in essence. What would your advice be to her.

Hewitt: You don’t counsel that she continue civil disobedience?

Fiorina: Given the role that she’s playing. Given the fact that the government is paying her salary, I think that is not appropriate. Now that’s my personal opinion. Others may disagree with that, but I think it’s a very different situation for her than someone in a hospital who’s asked to perform an abortion or someone at a florist who’s asked to serve a gay wedding. I think when you’re a government employee; you are put into a different position honestly.

Hewitt: Carly Fiorina, great to have you. That’s why I like to ask you questions. You just answer them. I look forward to asking them of you at the Reagan Library debate in all likelihood with you on the main stage as of the amendment of the CNN rules an hour ago. Carly Fiorina, thanks for calling in.