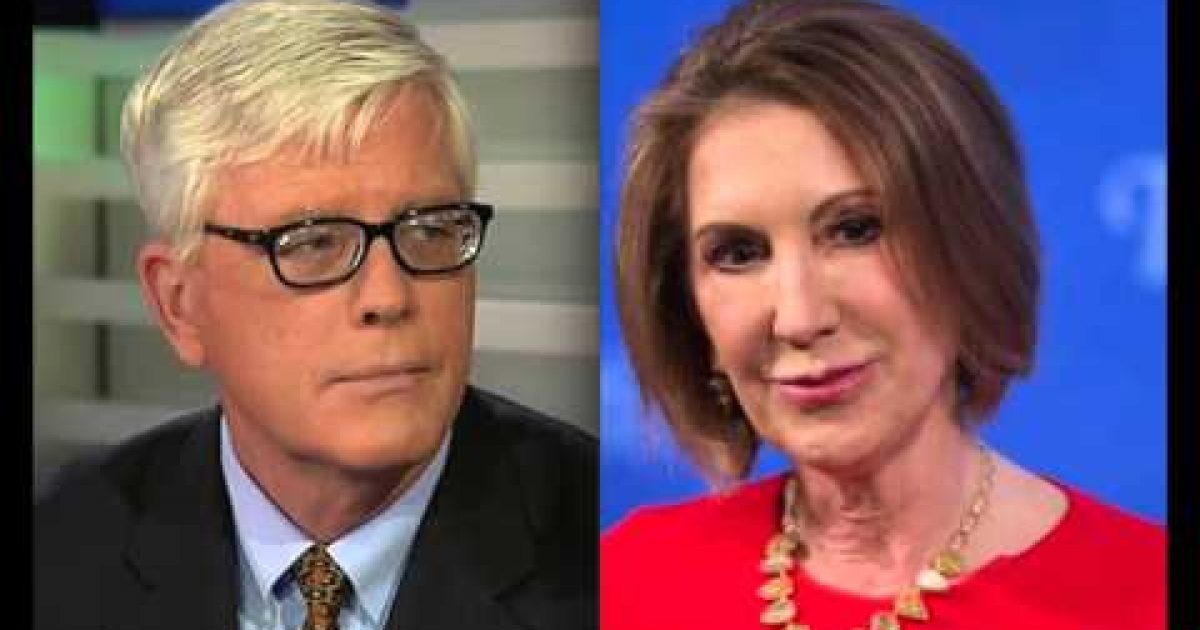 Earlier today I posted an interview of Donald Trump which took place on the Hugh Hewitt Show. During that interview Hewitt asked “The Donald” questions about terrorists and terrorist leaders that every presidential candidate should know, but Trump didn’t. Trump said the questions were “gotcha” questions seemingly because he couldn’t answer.

After the interview was posted (here), I got comments saying that because Trump wasn’t a politician he didn’t have to know this information, a position I vehemently disagree with. A political campaign is like an interview, and one does not go on an interview without knowledge of the subject.

As if to help me prove the point before Hewitt aired the Trump interview (it was pre-recorded), Hewitt pre-recorded an interview with Carly Fiorina in which he asked this non-politician candidate the same exact questions he asked Trump. She knew the answers and how they related to each other, proving that Trump should have known the answers also.

Fiorina’s interview both transcript and “video” are below:

Hewitt: It’s Hugh Hewitt. Earlier today I pre-recorded an interview with Donald Trump in which Donald Trump chided me for asking when he called “gotcha questions,” and I take very seriously that because I hate “gotcha questions.” They don’t advance the public conversation at all, so I thought I would run a controlled group experiment on whether or not they were “gotcha questions” by asking if Carly Fiorina would join me and I’d run through the same question set without her knowing what they her. Carly, welcome. It’s great to have you on. I appreciate you doing this with me.

Fiorina: Thank you, Hugh. Always good to be with you.

Hewitt: Now, again, you have no idea what I asked Donald. There’s been social media on it, so let me just begin where I began with him.

Fiorina: Just for the record, Hugh, I never know what you’re going to ask me.

Hewitt: (laughs) That’s true. I just don’t do that with people. But aren’t you familiar with General Soleimani?

Hewitt: What do you know about him?

Fiorina: Well, why don’t you tell me why you’re asking because I could go a lot of different directions here, but what’s the issue you’re trying to get at?

Hewitt: Whether he and the Quds force’s behavior would be impacted by the Iranian deal.

Fiorina: Okay. . . Of course (laughs). There’s no doubt. There’s no doubt. Look, we know that the general of the Quds force has been a powerful tool of the Iranian regime to sow conflict. We also know that the Quds forces are responsible for the deaths and woundings of American soldiers. We also that the Quds forces have been in Syria and a whole bunch of other countries in the Middle East. The Iranian deal – which sadly, has just been approved by Congress – starts a massive flow of money, and that money is going to be used not only to build up an Iranian nuclear weapon – which they have been hell-bent on getting for thirty years – that money is also going to go to the Quds forces, going to go Hezbollah. It’s going to go to all of Iran’s proxies which is why I’ve said to you on other occasions, Hugh, that we have to stop the money flow. And even if Congress had succeeded in stopping this deal – which we now know they have not – the reality is that China and Russia and European money are already flowing to Quds forces among proxies. And that’s why I’ve said I’d cut off the money flow by letting the Supreme Leader know that, hey, there’s a new deal, and we’re going to make it as hard as possible for you to move money around the global financial system so that we cut off the money flow from the Iranian regime to whomever, including the Quds force.

Hewitt: Now there are a lot of dangerous terrorist leaders in the world. There’s Hassan Nasrallah, there’s Al-Zawahiri. There’s al-Julani. There’s Abu-bakar al-Baghdadi. There’s al-Asiri. There’s al-Masri. Do you most of these without a scorecard, Carly Fiorina?

Fiorina: Well, I have to be very honest with you and say that sometimes I can get confused a bit between the name and group because they sound a bit alike sometimes, so I have to pause and think sometimes. But, I certainly know all those names both of the individual leaders and of the terrorist groups. I certainly understand where these terrorists are in play. I certainly understand that one of the most dangerous things that is going on right now is competition among these leaders and among their terrorist groups. So on the one hand, we see organizations like Boko-Haram pledging allegiance to ISIS – in other words – joining forces and conducting horrific acts on behalf of ISIS. But on the other hand, we see competition among these groups, so Al-Qaeda and ISIS are competing now. Al-Nusra is competing. That’s also dangerous because the way these terrorist groups compete is by one-upping each other in the horrific nature of the violence that they conduct.

Fiorina: Yes. I do. And of course, Hamas is focused in Palestinian territories. Hezbollah focuses in Beirut and other places, but the truth is, both of them are proxies of Iran. Both of them threaten Israel. Both of them are going to be benefitting from the agreement which Obama and Kerry have struck with Iran.

Hewitt: And so it was my way of bringing up with Donald – and I’ll bring it up with you now, Carly – that Israel is surrounded by Iranian proxies and by terrorists.

Hewitt: If they act unilaterally against Iran because they feel they have to. Will you as a candidate or a president unequivocally stand with them.

Fiorina: Absolutely, and it is why I have said to, Hugh, that on day one in the Oval Office I will make two phone calls. The first will to be to Netanyahu – a man I’ve known for a lot time – to reassure him that we will stand with the state of Israel. The second will be to the Supreme Leader of Iran to tell him, “New deal.” We will make as hard as possible to move money. And of course, the Israelis are surrounded by terrorists who are joined in some ways by their goal to wipe Israel off the face of the map. Let me -if you will – let me tell you a little story: on one of my many trips into the Middle East, I was in Jordan. And I was being driven from the airport to a conference – a hotel. And I asked the driver if I could see a map. Now Jordan is of course, one the more moderate Arab states. They are an ally. King Abdullah of Jordan – a man I’ve known for a long time – he’s a fine man, and he and his air force are fighting ISIS as we speak and we need to help him in that fight, but nonetheless, even in that relatively moderate country, I asked the driver to see a map, and I looked at the map, and I saw on the map where Israel should be – a white space. No rivers. No geographic markings of any kind. No name. And I asked him, “What is this?” And he said, “This does not exist.” That is the depth. . .

Fiorina: I tell you that story to tell you and the listeners the depth of the ideology that Israel cannot exist and so Hamas or Hezbollah or the Quds force or Al-Nusra or the Supreme Leader in Iran chant “death to America” closely followed by “we must wipe Israel off the face of the map” – this isn’t a joke. This isn’t politics as usual as President Obama implied. This is the core of their belief. And so, Bibi Netanyahu – the head of Mossad – who I also know and who I’ve met with and spoken to about the Iranian nuclear program – the Israelis do face implacable resistance – aggression – enemies who truly want to wipe them off the face of the map and feel that so deeply that they will not show the country on their map.

Hewitt: So last question – how many times have you been to the Middle East, Carly Fiorina?

Fiorina: Oh, I would have to go back and count, but many, let’s say (laughs).

Hewitt: How often to Israel? How many times to Israel?

Fiorina: I’ve been to Israel one time actually.

Hewitt: And Saudi Arabia and Egypt, have you managed to been to either of those?

Fiorina: I have been to Saudi Arabia several times. I have not yet travelled to Egypt.

Fiorina: The last two times, I was planning to go there, there was security issues.

Hewitt: So, my question is at the end of this – that’s the same basic question set that I posed to Donald Trump that he objected to. Do you think that’s “gotcha” because I don’t want to do that at the debate. I don’t want to put people in the position of not knowing names and dates, but I do worry that people have a general grasp of Islamist radicalism. What do you think?

Fiorina: I don’t think they’re “gotcha questions” at all. The questions you’re asking are at the heart of the threat that we face, that our ally, Israel, faces, that the world faces. It is critically important that America lead again in the world. It is critically important that we have a leader in the White House who understands the world and who’s in it and how it works. Who has been to these places. Who has met these leaders. Some of this you can read about in a briefing book, but there’s one level of understanding that you get when you read something. There’s another level of understanding that you get when you’re sitting in the back of a car and a driver gives you a map and Israel literally wiped off the face of the map. That’s a whole different level of understand, and I think that’s the kind of leadership we need the White House, honestly.

Hewitt: Carly Fiorina, thanks for joining me on short notice and pre-taping this before any of the question set got out there, and agreeing to do so. I appreciate your short availability and come back soon before the Simi Valley debate.