WATCH: On Jan 6 Did Capitol Police Officer Push Man Climbing Up The Capitol To Ground ?

Maybe That’s Why They Don’t Want To Release The Thousands Of Hours Of Video Footage. 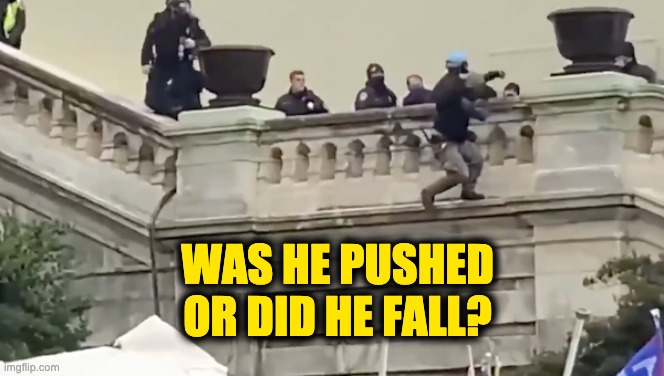 Capitol Police have been trying desperately to keep the January 6 video footage hidden — could this be why? capitol police push man

The Democrats and the partisan hacks in the Corporate Media continue to push the narrative that the riot on January 6 was an “insurrection” despite the attendees being unarmed.

For months the partisan hacks claimed the George Floyd riots were “mostly peaceful” protests. They ignored the looting, destruction, and death that they wrought.  They dismissed the nightly attacks on the federal courthouse in Portland by Antifa. But those same partisan hacks suggest that the people who followed the crowd and ended up trespassing in the Capitol on January 6 were a “threat to democracy.”

Of course, some agitators broke things and got aggressive with Capitol Police, and that’s unconscionable. That kind of behavior should be rejected, and they should face the consequences for it.

However, many of the January 6 rioters have been held essentially as political prisoners, and the most many of them are being charged with is trespassing on federal property.

The vast majority of attendees of the January 6 rally were peaceful. The only person who died as a result of violence on that day was Air Force veteran Ashli Babbit, the unarmed Trump supporter shot by Capitol Police officer Michael Byrd. Of course, Byrd faces no charges and no consequences. As a matter of fact, he even had a somewhat sympathetic interview.

Still, some questions need answers. Unlike other incidents involving civilians and police, there are over 14,000 hours of video of this “insurrection,” which investigators have refused to release to the public.

Fortunately, there is still some footage out there.

Stephen Horn, an independent journalist, posted a video on Twitter that shows a man falling after climbing up the side of a staircase railing and trying to climb over. The footage was slowed down and showed several different angles. It appears that the man was pushed by a Capitol Police officer wearing a helmet.

The man was later taken away on a stretcher.

A yet unidentified man was carried off on a stretcher at the Capitol riot after a fall of 3x-4x his height off a staircase. I slowed down four different angles of video, and it appears that he was pushed by a US Capitol police officer in a motorcycle helmet. pic.twitter.com/TWXbGymqG7

It would be interesting to note what time that incident occurred and if it contributed to agitating the crowd who witnessed it. Generally speaking, right-wingers are big fans of Justice — with a capital “J.” Watching a guy get pushed from a railing like by a cop — whom right-wingers support — would seriously tick off some folks on the right.

We’re big “Back the Blue” cheerleaders over here at ClashDaily. It’s been frustrating to watch local politicians handcuff their own law enforcement officers during the BLM riots and the nightly Antifa riots in Portland and see the aftermath left by “progressive” mobs. Law enforcement is vital in maintaining a civilized society that doesn’t descend into absolute chaos. That said, we also believe that law enforcement officers who abuse their authority should face the consequences. After all, the government has granted certain individuals the ability to use force in a sanctioned way and, as Peter Parker’s Uncle Ben said, “With great power comes great responsibility.”

In February, CNN reported that six Capitol Police officers had been suspended with pay, and 29 others were under investigation for their actions on January 6.

Interestingly, the actions that caused suspension didn’t involve pushing a MAGA dude who then was carried away on a stretcher. No, the actions were things like… taking photos with the mob and wearing a “Make America Great Again” hat.

One of the suspended officers took a selfie with someone who was part of the mob that overtook the Capitol, according to Rep. Tim Ryan, a Democrat from Ohio. Another wore a “Make America Great Again” hat and started directing people around the building, Ryan said.

Last month, Pittman said the department “has been actively reviewing video and other open-source materials of some USCP officers and officials that appear to be in violation of Department regulations and policies.”

There is no mention of any Capitol Police officer disciplined for pushing a man off of the Capitol building.

You’d think that a guy falling like that after what appears to be a shove by a cop — with tons of witnesses to back up the story — would warrant some sort of disciplinary action, right?

Especially since there is a video of the guy being taken away on the stretcher.

Maybe that’s why they don’t want to release the thousands of hours of video footage.