I’m Really Trying, But I Can’t Get Sick And Tired of All The Trump Winning 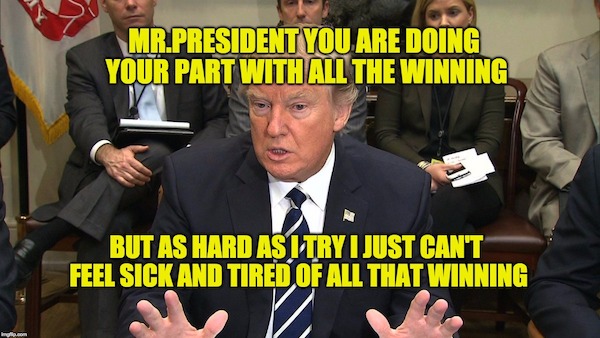 Yesterday it was a positive jobs report, today it’s illegal immigration, I know that its been less than two months since the inauguration, and so much good has happened in that short time.  The president promised there would be so much winning that we would get sick and tired of all the winning. But if I were to be perfectly honest, there’s not even a twinge…no feeling of being sick and tired of all of the Trump winning. I’m not accusing the president of lying, maybe it’s something in my DNA. What President Trump has gotten done in seven short weeks without a full cabinet is astounding. He is certainly winning at a record pace ..but I am sad to say, I don’t think I’ll ever be sick and tired of all the winning.

The winning started during the transition period, when the President announced about 1,000 Carrier jobs would stay in the Indiana, many corporations followed since then with announcements they had changed their plans and were no longer moving production/jobs out of the country, and/or other companies creating new jobs in the U.S. The latest was announced Monday as Exxon revealed  its Growing the Gulf program, a $20 billion investment over 10 years that would bring 45,000 jobs to America’s gulf region.

These wonderful announcements were a result of urging by President Trump, and/or reaction to the fact that the POTUS is on the road to lowering taxes and changing regulations that have created an awful environment for running a business in the United States.

The crazy part is that it is way too early for any of those great announcements to have an effect on the job market. But the job market is growing anyway.

A labor-market survey on Wednesday provided the latest signal that job growth is strengthening along with business confidence.

The ADP numbers reflect non-farm private sector jobs. On Friday the 10th, the Department of Labor releases its job numbers for February.  If the numbers show a similar trend it’s an indication that President Trump’s plans for fixing the economy is improving the economy even before the bulk of it is implemented. Obviously business leaders believe the president will get his plans through congress and just those expectations have caused them to increase hiring.

That was yesterday’s news. To be honest last night after learning of the job news, I couldn’t sleep. It had nothing to do with the employment figures and everything to do with WikiLeaks.  A few weeks ago my TV died and we replaced it with a Samsung “smart” TV. The picture happens to be great. But the latest leak from Julian Assange said the CIA had learned how to hack into Samsung TV’s.  So last night I stared at my brand new TV wondering if my brand new TV was staring back.  I became even more concerned this morning when I walked out of the bathroom after taking a shower without a bathrobe and got dressed in front of that Samsung TV.  But then I realized if the CIA could handle the war-zones of the Middle East, they can handle seeing me in the buff.

Early Thursday morning there was more good news.  According to the department of homeland security (DHS), 23,589 people were caught trying to enter the country illegally in February. That was the lowest number for the February in years and a 40 percent drop from the 42,504 caught in January. Actually it’s not just the lowest number for Feb.it’s the lowest number for any month since they started keeping monthly statistics in 2012. And the wall hasn’t even been built yet!

According to DHS Secretary Kelly said, smugglers have significantly increased their fees for sneaking people into the country,  “Routes that cost $3,500 in November now cost $8,000, he said — another signal that smuggling cartels’ business is suffering.” Of course this means that it won’t be long before the MSM starts saying the President is hurting some (cartel) industries.

All this is happening despite the fact that the wall hasn’t been built yet.  The drop is probably a result of the word getting out that there’s stricter enforcement at the border since President Trump took over.

Secretary Kelly attributes the drop in the switch from lax enforcement of immigration laws under Obama to the imposition of tougher consequences for illegal immigrants under the President Trump who has untied the hands of border agents.

“The early results show that enforcement matters, deterrence matters, and that comprehensive immigration enforcement can make an impact,” he said.

The drop was severe across all categories.

The number of unaccompanied illegal immigrant children caught by the Border Patrol fell below 2,000, while the number of people traveling as families was just 3,124. In January, that number had been 9,300, and in December, it had been more than 16,000.

DAMN! More Winning.  And I don’t feel sick of it not even a twinge.  What is wrong with me???  I’m very happy that the President is doing what he promised and he is getting the results I thought he would get when my vote was cast for him.

As this post is being wrapped up, Fox broadcast the news that Samsung is going to move manufacturing of some home appliances from Mexico to the U.S., resulting in another 500 Americans being employed–even more winning from the Trump Administration. Not only is there a feeling happiness that under President Trump there is more winning, but I fully expect the winning will continue as long as he is in the Oval Office.

On the other hand after seeing my country lose so badly over the past eight years, I just can’t feel sick and tired of his winning. The winning is there, but I am enjoying it…not feeling sick and tired. To be honest, all I could do was paraphrase this song from the musical “A Chorus Line:

A short later I heard we won more jobs
And I dug right down to the bottom of my soul…
And sobbed.
‘Cause I felt… nothing.