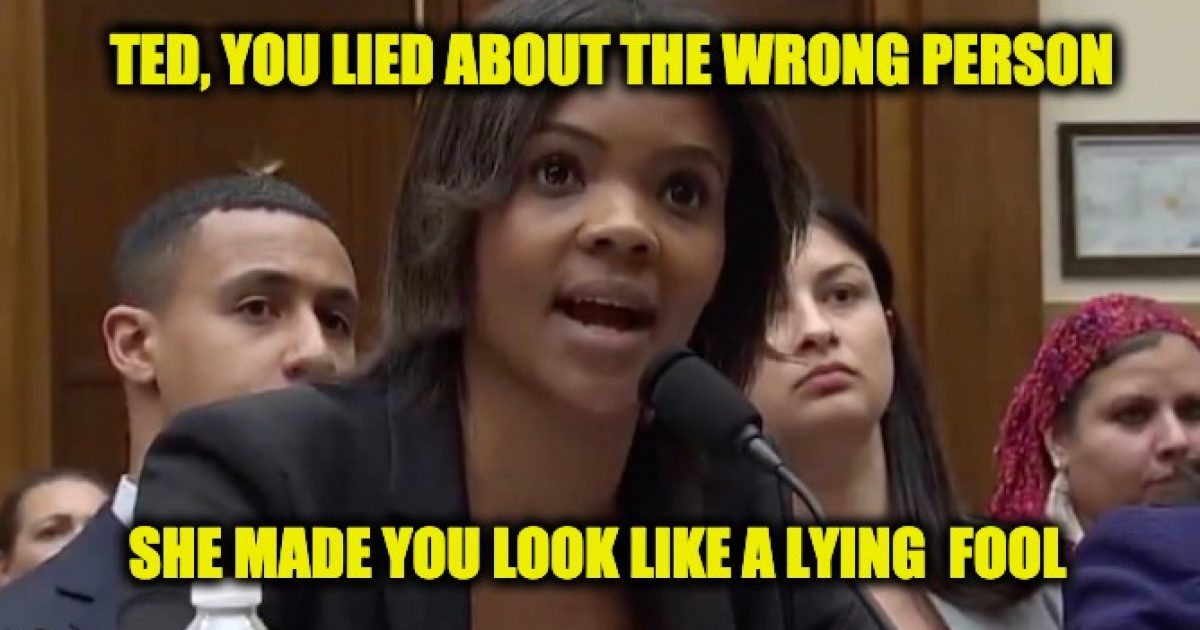 Lieu showed himself to be a despicable lying liar when he played a selectively edited recording of previous comments she made about Adolf Hitler.

“Out of all the people the Republicans could have selected, they picked Candace Owens. I don’t know Ms. Owens, I’m not going to characterize her, I’m going to let her own words to the talking,” he said before playing the out-of-context recording.

.@RepTedLieu plays recording of Candace Owens: "I don't know Ms. Owens. I'm not going to characterize her. I'm going to let her own words do the talking. So, I'm going to play for you the first 30 seconds of a statement she made about Adolf Hitler." pic.twitter.com/xiilLBUIwF

Of all the people Ted Lieu could have cherry picked a recording to project a false image of someone,  he chose the wrong person. Candace Owens made mincemeat of the lying Lieu.

“I think it’s pretty apparent that Mr. Lieu believes that black people are stupid and will not pursue the full clip…That was unbelievably dishonest…I’m deeply offended by the insinuation of revealing that clip without the question that was asked of me,” she said.

But at one point during her response, Jerrold Nadler, the representative from New York who would sell his own family* to help his party,  tried to stop Owens. He falsely claimed she was disparaging a member of Congress. Even though it was Leiu who was defaming her

*Nadler already sold out Israel to help Obama with the Iran deal and sold out American Jews to make Rep. Omar’s statements not seem anti-semitic.

Candace Owens: "I think it's pretty apparent that Mr. Lieu believes that black people are stupid and will not pursue the full clip…That was unbelievably dishonest…I'm deeply offended by the insinuation of revealing that clip without the question that was asked of me." pic.twitter.com/UioMSZK93d

Owens also noted that she works for Prager University, an organization run by an Orthodox Jew.

It’s clear from the two clips that Democrats are apparently seeking to officially criminalize opposing points of view, and intend to do so using despicable smears and lies.

Here is a Georgetown University bot lying about Candace Owens in order to back up Ted Lieu's bigotry https://t.co/1jA7X4VOsn

Wonder if Ted Lieu will pull this up on his phone next time Ilhan is in a congressional hearing. https://t.co/gCO8WS2dsJ

No way. Chairman Jerrold Nadler won’t let Leiu pull out his phone for Omar, he blames her hatred on a right-wing conspiracy.

‘If anybody needs to be fact-checked, it’s the media’: Kayleigh McEnany unloads on Jim Acosta
May 30th, 2020 Liberty Unyielding

Here’s the Problem America: Seattle Cop Fired for Asking Fellow Cops to Respect the Rights of the People
May 29th, 2020 DC Clothesline

There Is Evidence That Does NOT Support Criminal Charge of Cop In Floyd’s Death, Says County Prosecutor
May 29th, 2020 Flag And Cross
Thanks for sharing!
We invite you to become a Lid insider. Sign up for our free email newsletter, and we'll make sure to keep you in the loop.
Send this to a friend