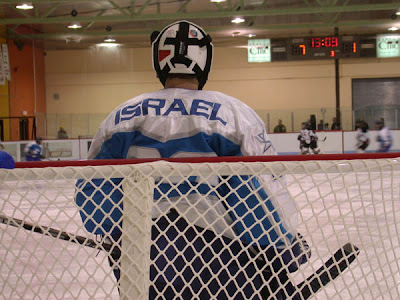 Think for a second. Who is your favorite Jewish Ice Hockey Player? AH-HA ! You can’t think of one right? Well we better start teaching our children to play pronto because Canada must be upset with us.

Oh I know what you are thinking. “No, not my kids it will lead to too much orthodontic work”

But someone’s got to take the hit for the team…The Jewish Team at least. You see the Canadian Government is funding an NGO that is spewing hatred toward Israel its called Alternatives. I can’t figure out a logical reason why they would do that except for the fact that their are not enough Jews playing their national sport.

With half of its funding from the Canadian government, Montreal-based Alternatives continues to expound and support clear anti-Israel political activity, in contrast to the proclaimed focus on civil, political, economic, social, and human rights. Through media statements and in cooperation with groups such as the PNGO, Alternative Information Center, Palestinian Agricultural Relief Committee (PARC), and Israeli Committee Against House Demolitions (ICAHD), Alternatives promotes the demonization of Israel, contributes to the conflict, and requires greater scrutiny from the Canadian government.

Alternatives claims to promote projects “centered on . . . democracy . . . good governance . . . civil, political, economic, and human rights . . . [and] civil society development, management, and autonomy.” To carry out its mandate, Alternatives supports “local and community-based initiatives” and “network creation between groups so that they can benefit from their shared experiences and successes.” Since NGO Monitor’s last update, Alternatives has continued to provide financial support to politicized NGOs as well as publish statements on its website that demonize Israel, exploit international legal and human rights terminology, and ignore Palestinian terrorism, factional infighting, and corruption. Rather than promote human rights and civil society, such activity increases conflict in the region and diminishes the prospects for peace and co-existence. Because Alternatives is funded by Canadian taxpayers, questions should be posed about the clearly pro-Palestinian nature of the NGO’s advocacy.

According to the Alternatives website, “…approximately 50% of our funds come from government sources (principally the Canadian International Development Agency). The remainder is a combination of support from over 50,000 donors and members, as well as partner organizations working alongside Alternatives, including major unions and church groups.” The latest annual report posted on Alternatives’ website is from 2002-2003, but does not list specific budgetary figures, however the NGO’s annual report from 2001-2002 states that the budget was “slightly more than seven million dollars.”

Framing of the Israeli-Palestinian conflict

Alternatives prominently highlights the Arab-Israeli conflict on both its French and English homepages. The “Palestine” section is one of only a few specific topics with its own link on both pages. This section lists numerous articles with provocative titles such as, “Hamas and Israel’s ‘Right to Exist’” and “Starving a Nation” as well as an interview with Norman Finkelstein, who is widely criticized for his inflammatory publications.

In addition to the radical pro-Palestinian views expressed on its website, Alternatives actively promotes politicized NGOs operating in the Arab-Israeli conflict both financially and through the dissemination of their publications and advertising their events. While Alternatives appears to be engaged in some genuine development work in the Palestinian Authority, such as offering training for Palestinian women or a teacher training program in Gaza, many of the NGOs it supports engage in Durban Strategy rhetoric demonizing Israel and ignore the context of terrorism.

One of Alternatives’ major partners in Israel and the Palestinian Authority is the Alternative Information Center (AIC). Alternatives provides financial support for this NGO though the exact amount of this support is not specified on either organization’s website. An article on Alternative’s site, characterizes the AIC as “the first and most important Israel-Palestinian organization with the principal mission of disseminating information, research, and political analyses . . . ” and states that AIC’s publications and activities “provide the space and necessary tools for a rapprochement of these two peoples in conflict.” AIC, however, is a decidedly pro-Palestinian NGO that engages in anti-Israel rhetoric and promotes a radical Palestinian agenda. For instance, the AIC has sponsored programs including the “Apartheid Law Seminar”; lectures entitled, “Against Models and Solutions: Towards a Bi-National Thinking” and “Boycott, Sanctions, and Divestment Against Israel”; and documentary films “that show the 1967 implemented apartheid measures in order to preserve a Jewish majority in Jerusalem.” AIC publications include “News from Within” which “challenges the Jewish and Zionist nature of the State of Israel,” “Ethnic Cleansing in the Negev,” and numerous articles alleging the persecution of Azmi Bishara (one of which claims all Israeli institutions from the media to the government have proclaimed Bishara to blame for the Lebanon War). Due to this activity, AIC cannot be considered a credible, objective source for information, nor can it be considered to be “provid[ing] the necessary tools for rapprochement.”

Along with AIC, Alternatives is part of Alternatives International, a network of NGOs ”struggling against neoliberalism, imperialism, social injustice and war.” Alternatives International also supports a narrow pro-Palestinian view. For instance, on January 18, 2007, Alternatives International published a statement by the Palestinian NGO Network, (PNGO) which played a significant role in the 2001 Durban conference. Created by PNGO from the World Social Forum in Nairobi, the statement supports “…Boycott, Divestment and Sanctions (or BDS) against Israel, similar to the international community’s measures against apartheid South Africa in the past.” The statement goes on further to condemn Israeli government policy on family reunification. It should be noted that the statement ignores the many suicide bombings (and bombing attempts) perpetrated by residents of the Palestinian Authority who have exploited their Israeli identity cards gained as a result of their marriage to Israeli citizens.

In addition to its financial support of politicized NGOs, Alternatives supports and enhances the credibility of biased NGOs such as the Palestinian NGO Network (PNGO), Palestinian Agricultural Relief Committee (PARC), and Israeli Committee Against House Demolitions (ICAHD) by posting their statements and advertising their events on its website:

* A June 23, 2005 statement by PNGO posted on the Alternatives website claims the disengagement from Gaza is a “trade-off meant to legitimize the Israeli settlements in the West Bank,” that “Jerusalem will become an isolated island,” and “Gaza will continue to be one big prison.” The article also employs international legal rhetoric by claiming that Gaza “will remain occupied under international law” even though under Article 6 of the Fourth Geneva Convention on the Protection of Civilian Persons in Time of War, a foreign power is only considered an occupier “to the extent that such Power exercises the functions of government in such territory.” Since 1995, and certainly since the disengagement, Gaza’s Palestinian population has been under Palestinian Authority jurisdiction.
* On June 9, 2006, eight Palestinian civilians were killed in disputed circumstances by an explosion on a Gaza beach. Despite the contentious nature of the incident, a number of NGOs immediately adopted Palestinian claims holding the Israeli army responsible, and used the opportunity to attack Israel politically. In an article on the Alternatives website republished from the Palestinian National Initiative on June 12, 2006, NGO claims of IDF responsibility for the incident are repeated.
* An AIC statement on the Alternatives website condemns Israeli actions in Gaza following the kidnapping of Corporal Gilad Shalit. The statement claims that the “invasion” is a “punishment for the results of the democratic Palestinian elections” and accuses Israel of “assassinating, injuring, and kidnapping Palestinians.” The statement omits any mention of the involvement of the Hamas-led Palestinian Authority in on-going Qassam rocket attacks on Israel, the 2006 suicide bombing in Tel Aviv, and the numerous terrorist attacks and attempts aimed at Israeli civilians.
* In May 2006, Alternatives published a report by Physicians for Human Rights-Israel (PHR-I) which discussed the state of the Palestinian health care system. Previous NGO Monitor reports have documented how PHR-I consistently demonstrates a lack of context that reflects political and ideological objectives. Ignoring ongoing issues of corruption and the wider complexities of continued funding for the Palestinian Authority, PHR-I noted in the report that “in the short term, Israel is responsible for the outcome of the collapse of Palestinian civil society in general and the health system in particular.”
* In November 2005, Alternatives posted an item on its online calendar announcing an event hosted by the Coalition for Peace and Justice in Palestine in which Jeff Halper of the highly biased ICAHD spoke. As documented in previous NGO Monitor reports, ICAHD uses EU funds to campaign against the two-state solution, promote boycotts, uses terms such as “apartheid”, and grossly distorts the Israeli-Palestinian conflict.

Leaked Email from Chicago Mayor Lightfoot to Her Staff Looks Like It Was Written by a Petulant Teenager
June 16th, 2021 Flag And Cross