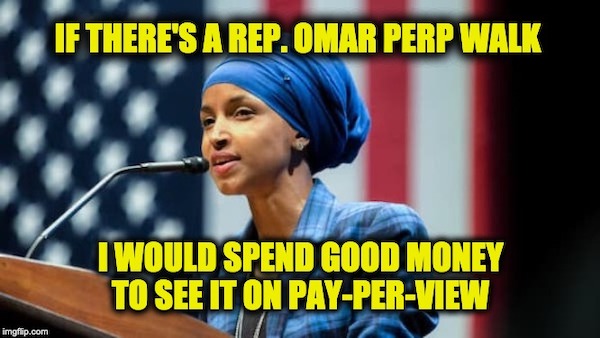 Ilhan Omar, the America-hating, terrorist-loving anti-Semitic Democrat representative from Minnesota, posted a tweet in which she claimed to be raising funds for a Minnesota food bank.  She then deleted the tweet after was it was questioned by the director of the project she claimed to be helping. campaign fraud Ilhan Omar

As it turned out, Omar’s tweet directed followers to ActBlue, a left-wing fundraising website liberals use to fund Democrat candidates. Act Blue describes itself as a “nonprofit fundraising platform for campaigns and organizations and the small-dollar donors who support them!”

One of the directors of the program tweeted: “I am the Executive Director of GMCC – Minnesota FoodShare is our program. Ilhan Omar had nothing to do with this project. I do not know where this money is going to”

David Steinberg, who has done stellar reporting about Omar, observed:

Yet another @IlhanMN campaign finance problem:@IlhanMN posted this tweet on Tuesday, then deleted it at some point after it received this reply. pic.twitter.com/S9kS6JqiWZ

Minnesota FoodShare, Twitchy tells us, WAS raising money, but NOT through ActBlue.

We're entering the final hours of #MarchCampaign. Help us fill our FoodFund w/more $$$ so we can give more $$$ to #foodshelves serving #Minnesotans throughout the state. pic.twitter.com/ELxYfJQNHz

The question now is, how much was raised by Omar, and did the money actually get to the food bank?

Omar was accused of violating state campaign finance rules last year and ordered to reimburse more than $3,000 in campaign funds after it was found she had used committee funds for travel expenses. Omar was hit with a Federal Election Commission complaint about paying Tim Mynett, now her husband, and his consulting firm hundreds of thousands of dollars.

That was for the 2018 election cycle. Per Open Secrets, for the 2020 election cycle (through 04/21/20), Omar’s campaign paid her husband’s firm well over $800k, and perhaps to elect other anti-Semitic socialist candidates gave Act Blue over $100k.

Interestingly In an interview last year, Omar suggested that people should be ‘more fearful of white men’ than jihadists. I suspect her new husband is one white guy she’s not afraid of.

Any other white person who she often accuses of having “white privilege” would be cuffed and taken to jail for having committed these fraudulent activities.

Oh yes, 100 percent I do. I hope this is investigated. I’m appalled.

As anyone with a conscience should be.

Exit question: Will anything ever be done to stop her?