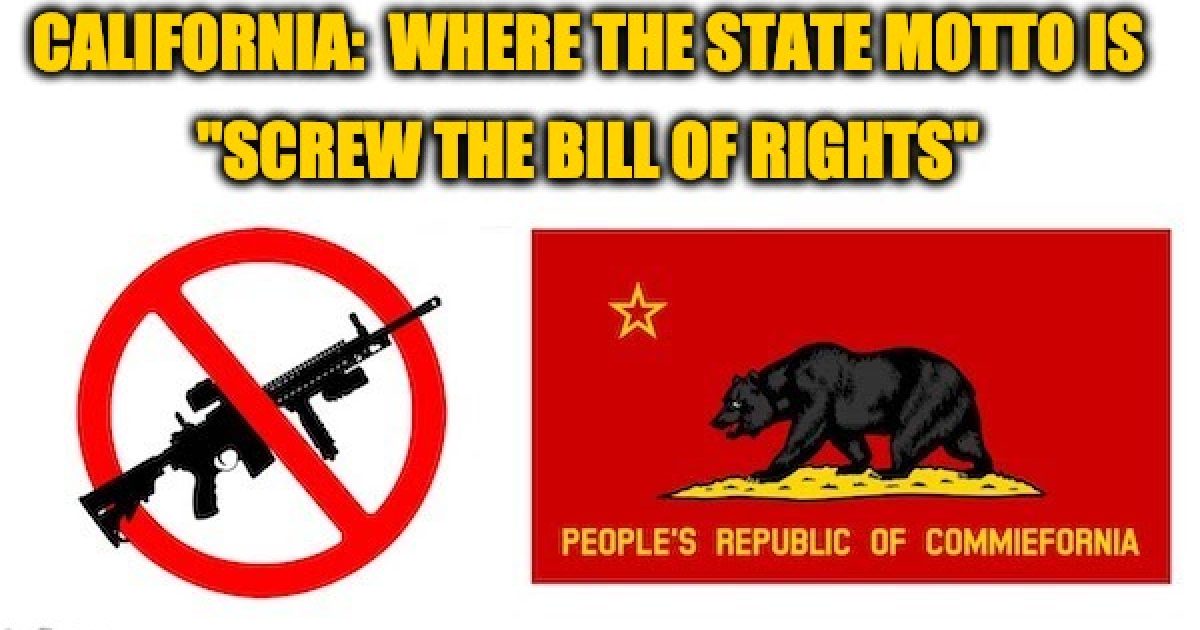 Why doesn’t California just go full on tyranny and stop pretending to be part of the United States? Their new Governor, Gavin Newsom, is poised to push through some of the gun control measures so extreme that former Governor, Jerry Brown vetoed.

California has some of the strictest gun laws in the country, but even as they passed measures in the aftermath of mass shootings, legislators occasionally found themselves frustrated by former Gov. Jerry Brown and his veto pen.

Now they sense fresh opportunity under Gov. Gavin Newsom, a supporter of tightening gun laws who sponsored a successful ballot initiative in 2016 to institute background checks for ammunition sales.

At a Capitol news conference Monday with former Arizona Rep. Gabby Giffords, lawmakers rattled off proposals vetoed by Brown that they intend to revive this legislative session, including a limit of one rifle or shotgun purchase per month and more regulation of parts that can be turned into homemade weapons.

“Stopping gun violence takes courage — the courage to do what’s right,” said Giffords, who was gravely wounded in a 2011 assassination attempt. “We must never stop fighting.”

California legislators said they hope to make the state a model for the rest of the nation.

Model for the rest of the country? Are they talking about canceling the Bill of Rights?

They’ve already proposed a requirement for gun owners to lock up their weapons, They’ve previously suggested a 10-year prohibition on firearm possession for anyone convicted of two drug or alcohol offenses within three years. They already have proposed a gun tax to fund violence prevention. It seems those things aren’t enough to add to their gun control basket.

The kind of extreme gun control has failed California as it has failed across the United States. If it were successful, places like California would be safe from any kind of gun violence. We know that’s not true. And as usual, no one is explaining how any new oppressive anti-gun laws would prevent criminals from committing gun crimes while protecting the Second Amendment rights of law-abiding gun owners.

And some areas of the state try to intimidate lawful gun owners from owning their firearms. Take Los Angeles, for example. They recently passed a city ordinance that forces contractors who build buildings in the city to reveal any ties to the NRA. Seriously. How many contractors with links to the NRA have been convicted or arrested for mass killings? Just asking.  The answer is zero

The ordinance would not ban NRA-connected contractors from doing business with the city but would require them to disclose any contracts or sponsorships they have with the gun rights advocacy group.

So now that their new governor is all excited to pass more gun regulations, perhaps pro-gun Californians will start fighting a lot harder.