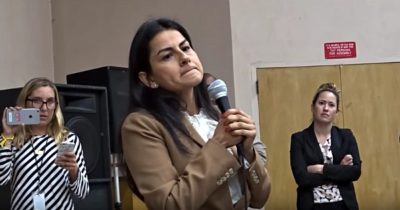 Congresswoman Nanette Diaz Barragán (D-CA) was not expecting to run into opposition at her most recent town hall, but that is exactly what happened.

The entire event goes off the rails right from the beginning when Barragán refuses to take part in even the simplest task – reciting the pledge of allegiance. Everything just gets worse from there…

In fact, Barragán was so out of sorts that she ended up fleeing the event (literally) before it was over. Thankfully, that didn’t stop her opponents, they just followed the weak-kneed Democrat as she sprinted for a “safer” space.

The Democrat simply did not have the wherewithal to handle opposing viewpoints or to explain her own failed ideas and plans. So she forced a few local policemen to act as a barrier between her and the voters and hid in a classroom hoping to be left alone. However, the intrepid voters from her district followed her and continued to demand to be heard. Apparently, Barragán didn’t realize that as the representative of her district she was actually supposed to hear the concerns of her constituents and then relay those messages to her colleagues in Congress. Instead Barragán apparently thought that she would get elected and just do whatever she wanted to do in D.C. 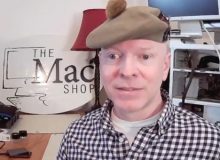