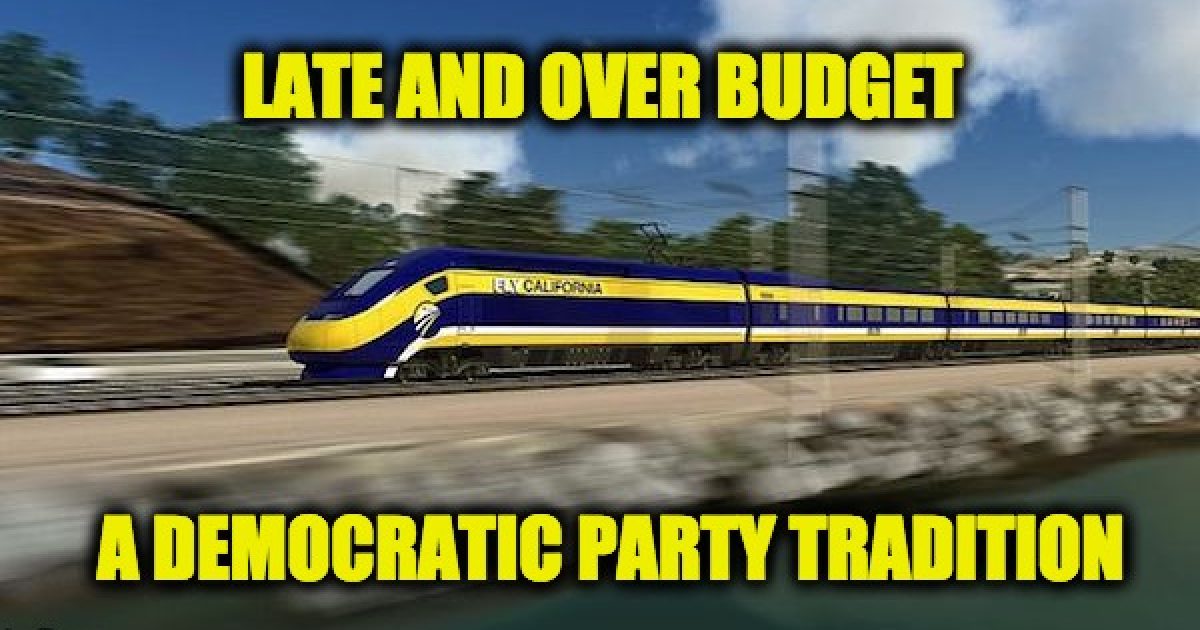 America used to be able to build things. Back then we got the Empire State Building and the San Francisco Bridge in less time than it takes to film a movie today. But that daring-do spirit seems to be a thing of the past and some of the worst evidence of its passing is the gigantic joke that is the billions over budget, and years overdue high-speed rail project in California.

“It’s billions of dollars over budget and seven years behind schedule and appears to have no plausible way of living up to its goal of getting riders across the state in three hours or less.”

New York was able to build its underground subway system in about four years once authorities got serious about building it. The Golden Gate Bridge was officially started in 1933 and opened to traffic four years later. The Empire State Building only took a scant two years to go from the ground up. Even Chicago’s elevated train system only took about ten years or so, despite that it was built piecemeal and not originally conceived as a single grand project. And as to Chicago’s El, from its start in 1892, it was an operating venture, not an over-budget boondoggle that went nowhere.

There are countless examples of great American construction projects that were conceived and finished in short periods of time. But California’s bullet train is decidedly not one of them.

Among so many of its decisions, California’s idea to build a high-speed train to span the state giving citizens the amazing option to traverse one of America’s largest states in only three hours stands out as one of its most laughable.

MSN Money recently published a piece revealing the just how bad this mess has been for the “Land of Milk and Honey.”

This week’s updated cost estimate — to complete just the first phase – a 119-mile segment in the Central Valley – has ballooned to $10.6 billion. That’s a jaw-dropping 77 percent increase from initial estimates, 36 percent higher than forecasts from a year ago.

When California voters in 2008 narrowly approved $10 billion in bond as seed money for the high-speed rail development, they were told the total cost would be about $43 billion.

San Diego City Councilman Mark Kersey is not a fan.

“The so-called bullet train is a solution in search of a problem that is plagued by billions of dollars in cost overruns and fiscal mismanagement,” he said. “The billions being wasted on this boondoggle could have been invested in our current infrastructure needs, such as water storage, flood control, highways, and bridges.”

Kersey is right. The whole thing really has been a joke.

Democrats are 100 percent to blame for this mess. They wanted this idiotic project, they pushed the for the tax to float the mess, and they have been in charge of the whole thing. The failure falls on their shoulders.

Soon California will hold the crown for public works boondoggles.

There is one other massive boondoggle that California’s bullet train evokes and that is the horrible boondoggle that was Cincinnati, Ohio’s failed subway project. From about 1916 to the early 30s Cincy’s city fathers tried to build a subway for the Queen City that wasted millions and never got finished. Well, over $6 million in Depression-era money was wasted on the project (about $90 million in today’s money). Cincinnati’s subway boondoggle has always been one of America’s worst civil project disasters. That is, of course, until California’s failed bullet train reared its ugly head.

California looks to be trying to take Cincinnati’s jester’s crown.

The video below is how the train was supposed to look: