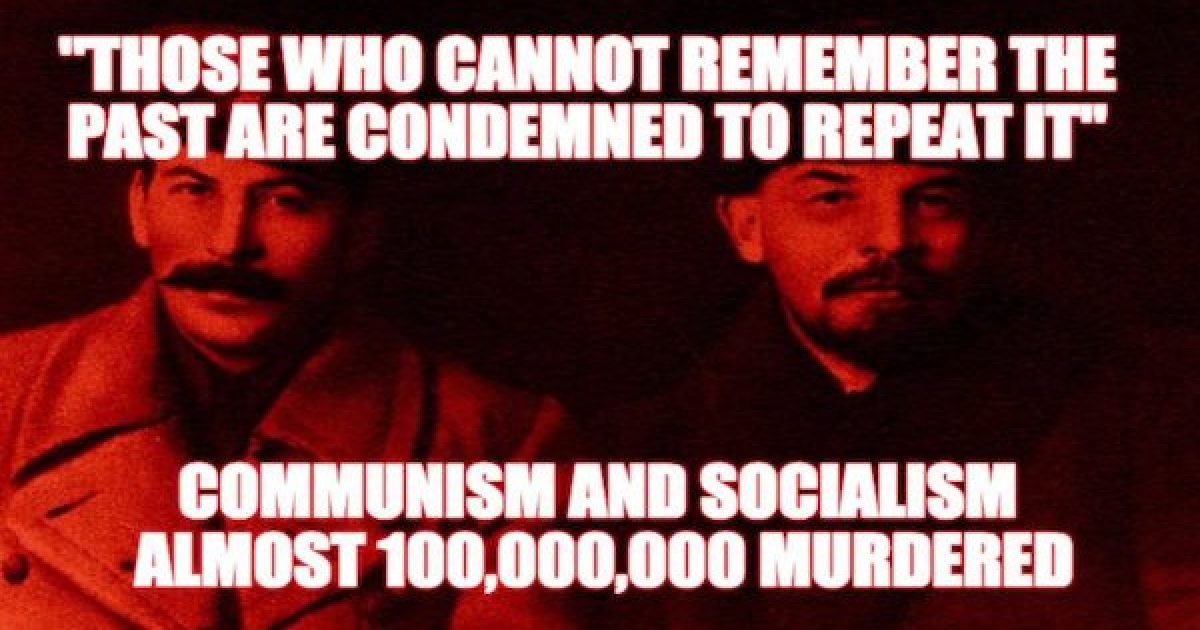 On Tuesday, the White House declared November 7, 2017, the “National Day for the Victims of Communism,” in recognition of the 100 million people killed around the world by the totalitarian ideology.  This apparently didn’t sit too well with Blake Montgomery, a writer for Buzzfeed who covers “tech and protests.”  According to Montgomery, the entire “victims of Communism” thing is nothing more than a “white nationalist talking point.”

Today, the National Day for the Victims of Communism marks 100 years since the Bolshevik Revolution took place in Russia. The Bolshevik Revolution gave rise to the Soviet Union and its dark decades of oppressive communism, a political philosophy incompatible with liberty, prosperity, and the dignity of human life.

Over the past century, communist totalitarian regimes around the world have killed more than 100 million people and subjected countless more to exploitation, violence, and untold devastation. These movements, under the false pretense of liberation, systematically robbed innocent people of their God-given rights of free worship, freedom of association, and countless other rights we hold sacrosanct. Citizens yearning for freedom were subjugated by the state through the use of coercion, violence, and fear.

Today, we remember those who have died and all who continue to suffer under communism. In their memory and in honor of the indomitable spirit of those who have fought courageously to spread freedom and opportunity around the world, our Nation reaffirms its steadfast resolve to shine the light of liberty for all who yearn for a brighter, freer future.

But Montgomery apparently saw racism in the announcement, writing on Twitter: “‘Victims of Communism’ is a white nationalist talking point. Trump just made Nov 7 Natl Day for Vics of Communism.” 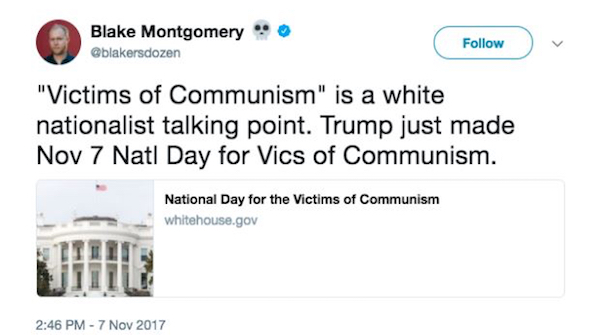 Naturally, his tweet didn’t sit too well with many who knew what communism is about.

Wasnt aware that Communist victims from Cuba, Venezuela, China, NK, the USSR (to name a few) were ALL white. #AintThatSomeShit

RIGHT! My husband’s grandmother left Cuba and it had nothing to do with White Supremacy, it was because of Communism.

Did you know 50-70 million Chinese people were killed under Mao in “Great Leap Forward”? 100M+ of all racial backgrounds died globally …

he can’t be that dumb, can he?

“Anybody that opposes communism is a white nationalist” is peak wokeness. https://t.co/hTfVmEoLAS

Finally, Mr. Montgomery realized he wasn’t winning new fans with the tweet, so he withdrew it, and posted:

I cover white nationalists, and they use that language a lot, which is why I made that very dumb mistake. 2/2

Horse poop! What does victim of Communism have to do with race?

Like many in the media, Montgomery was simply trying to invent a way to criticize President Trump. It is impossible to believe he didn’t know that international communist/socialist movements killed century killed at least 94 million people between 1917 and 1997. A detailed analysis in “The Black Book of Communism: Crimes, Terror, Repression” (which should be required reading by every student in America) reported the number of deaths caused by Communism and Socialism was estimated at 94,360,000, broken down as follows:

These estimates were made almost 20 years ago in 1997. Just imagine how some of the socialist and communist regimes have added to their total since (and some believe the estimates are too conservative). And let’s not forget the full name of Hitler’s Nazi party was; Nationalsozialistische Deutsche Arbeiterpartei (National-Socialist German Workers’ Party).

I am reminded of the words of Ronald Reagan:

Mr. Montgomery does not understand Marx and Lenin and he tried to spread his ignorance across twitter.

President Trump was 100% correct, on the National Day for the Victims of Communism American’s should remember the Marxist philosophies of Communism and Socialism are incompatible with liberty, prosperity, and the dignity of human life.

All lovers of freedom should re-dedicate themselves to teaching the truth of his murderous philosophy to their children. Because George Santayana was correct when he said, “Those who cannot remember the past are condemned to repeat it”