This Is What The Dems Call Peaceful Protests 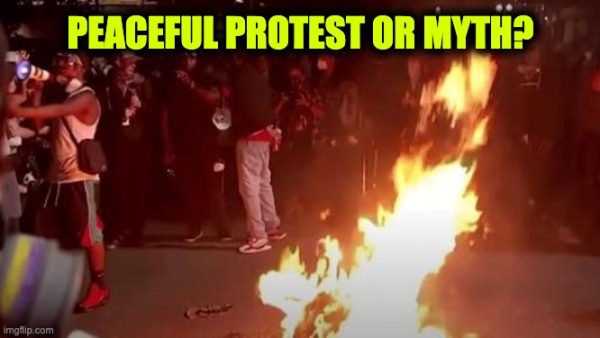 It seems that pigs heads aren’t the only thing being set ablaze in Portland, Oregon.  A video emerged of Antifa/BLM terrorists burning a stack of Bibles in front of the federal courthouse in Portland.  burn Bibles Portland.

The post featured a video which showed protestors with “Black Lives Matter” signs tossing bibles into a raging bonfire. The video, which has gone viral, had more than 1.8 million views and thousands of retweets.

“Now we move to the book burning phase,” said Donald Trump Jr. in a tweet Saturday. “I’m pretty sure ANTIFA doesn’t actually stand for what they say it stands for. Maybe just remove the anti part of [their] name and it’s perfect,” he wrote.

The fire was later put out by members of Moms United for Black Lives Matter, who doused the flames with bottles of water and stomped on the embers, according to KOIN 6, a local CBS affiliate television station in Portland.

‘F*ck Trump!’ | Bible and US flag set alight on 65th night of protests in #Portland pic.twitter.com/3c60egqEa3

Keep in mind that Black Lives Matter is a Marxist organization…

In another tweet, Cheong noted: “I don’t know what burning the Bible has to do with protesting against police brutality. Do not be under the illusion that these protests and riots are anything but an attempt to dismantle all of Western Civilization and upend centuries of tradition and freedom of religion.”

I don’t know what burning the Bible has to do with protesting against police brutality.

Do not be under the illusion that these protests and riots are anything but an attempt to dismantle all of Western Civilization and upend centuries of tradition and freedom of religion.

He’s right.  This has nothing to do with George Floyd. Neither did the other violence on Saturday night,

Portland Police provided public address announcements directing people to remain off of the property of the Penumbra Kelly Building and to move away to the west. As people continued to throw glass bottles and other objects Portland Police declared that the assembly blocking East Burnside was unlawful and directed people to disperse.

Portland Police dispersed the crowd, directing it west. People continued to throw glass and plastic bottles at police. People with “press” written on their outer garments repeatedly threw objects at officers. Portland Police continued moving the crowd to the west and south.

Perhaps, since Portland Mayor Tom Wheeler loves these terrorists so much and doesn’t give a damn if the city is destroyed, President Trump should build a wall around the city, give patriots living there a window in which to leave and let the radicals burn the rest to the ground. But first Congressman Nadler should move there. After all, last week, Nadler claimed the violence in Portland was a myth.