Probably Doesn't Taste Like Chicken (It's Too Gross To Try) 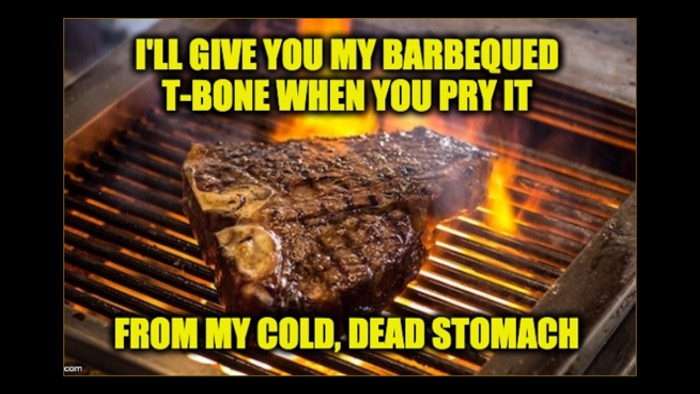 Part of the climate change activist’s strategy is to get rid of cows, both raising them and eating them. It’s because, on average, every cow releases 30 to 50 gallons of methane daily via farting and belching. But growing up, I shared a bedroom with my brother, and I can promise you,  he answered the call of the wild burrito much more than the average cow (he might blame me, but that wouldn’t be honest).

But cows are not alone. Cats fart, even dogs fart (although sometimes, when humans fire a stink torpedo, they blame their dogs).

Because of cows’ methane production, climate change enthusiasts believe eliminating cows will reduce the number of greenhouse gasses in the atmosphere. So instead, they promote eating insects as a substitute. The technical term for that is “Ewww.”

The radical left has been trying to normalize bug-based diets, but there’s an excellent reason that so many of us are grossed out by it. It’s this little thing called a ‘survival instinct.’

It’s the same reason we are grossed out by the smell of rancid meat. It’s not good for us, although it is better than the idea from Dr. Magnus Söderlund, who claimed that we must get used to eating human flesh in the future as a way of combating the effects of climate change. Gee, Cuomo killed grandma. This Swedish nutjob wants us to eat her. That’s a double “Ewww.” Thankfully that idea hasn’t come to the U.S. (yet).

The insect-loving Hollywood A-listers (if there still is such a thing)  who think they are experts in everything have been taking turns pitching the ‘hot’ new trend of shoving bugs into our faces.

They wag their fingers at us from atop a soapbox while telling us all the world does it, and we’re just too uptight to open up to such reasonable sources of protein. If they’re so eager for creative protein sources, they’re welcome to start serving up all those rescue pets euthanized by the ‘animal rights’ societies at some big soirees. You wouldn’t want little spot to die for dinner, do you?

Getting back to the bugs, they hate the idea of traditional farming and want us all to switch out our meat-rich meals loaded with beef, chicken, pork, and a few other similar two and four-legged animal-based sources for six-legged critters.

They want Timon’s story to be OUR story…

The problem is, when Timon ate bugs, he was denying his own nature and listening to a warthog named Pumba while the world he was supposed to be a part of slid into chaos. It was only then he stopped running away from who he was, took his place among the other animals, and stopped eating bugs.

And you know what’s funny about that? Scientific studies are backing up our natural impulse to be grossed out by that. Like we were nauseated by the idea of bat soup back when we were told the story (read: lie), that’s where many scientists believe COVID came from. Of course, we’re grossed out by eating grubs. Turns out, those grossed-out instincts are right on point.

With the rise of interest in eating everything from mealworms and crickets to — you guessed it — cockroaches, a European study was commissioned to look at whether these bugs being added to our part of the food chain could be a transmission vector for any unpleasantness. It came out in 2019, but the facts are even more relevant today than when they first came out.

Here’s a screenshot of the source:

With the rise of interest in eating everything from mealworms and crickets to — you guessed it — cockroaches, a European study was commissioned to look at whether these bugs being added to our part of the food chain could be a transmission vector for any unpleasantness. It came out in 2019, but the facts are even more relevant today than when they first came out.

Here’s a screenshot of the source: 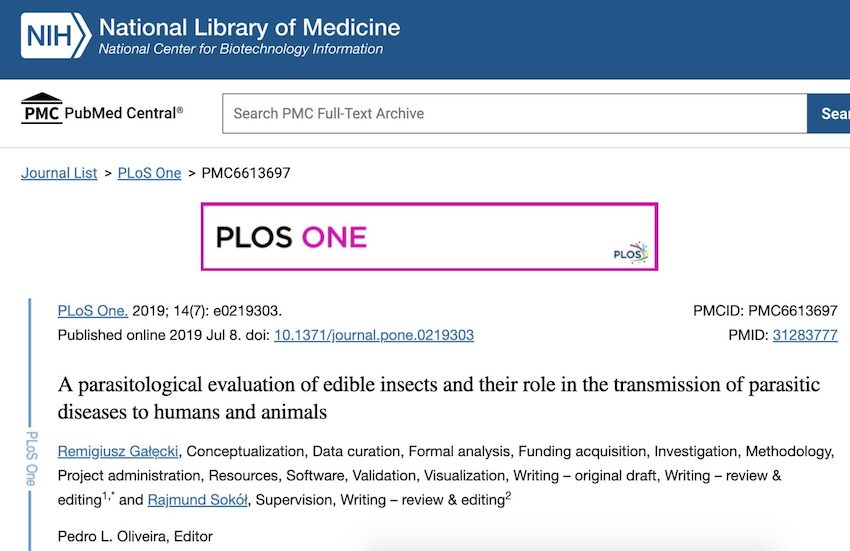 …The aim of this study was to identify and evaluate the developmental forms of parasites colonizing edible insects in household farms and pet stores in Central Europe and to determine the potential risk of parasitic infections for humans and animals. …

Uh-huh. Sounds altogether nasty. What did they find?

Before we even get to the parasite part, we see something they learned about the food-production practices of these commercial insect breeders.

During the research in individual farms, we observed unethical practices of individual breeders, such as feeding insects with animal feces from a pet shop, feeding insects with corpses of smaller animals, or feeding insects with moldy food and even raw meat. These practices significantly reduce the quality of the final product and undermine the microbiological / parasitological safety of such food. Currently, however, there are no regulations regarding zoohygienic conditions and the welfare of these animals as potential animals for food. Although the research was conducted on amateur insect farms, most were not found to be seriously flawed. Breeding of edible insects carried out in places not intended for this purpose (houses) can lead to additional danger for humans. In the course of the study, we recorded individual cases of spreading insects from farms, which resulted in rooms infestation, eg. by cockroaches or crickets. Another example is the possibility of transmission of parasites such as Cryptosporidium spp. on human aerogenically, therefore if the farms are unprotected well or there is a lack of hygiene in contact with insects, such invasions may occur. (Emphasis added)

If your food feasts on corpses and feces, can you really call it food?

But as we go deeper into the article’s conclusion, we see something else. 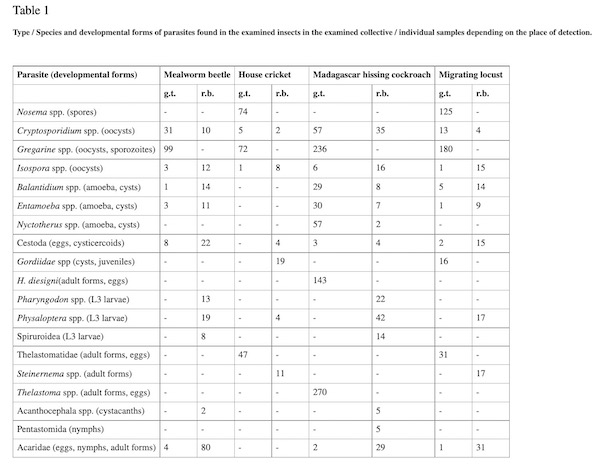 And because we all know someone will be sure to raise this objection, It says so in the Torah;

That was taken from  Vayikra (Leviticus) chapter 11.

21 However, among all the flying insects that walk on four [legs], you may eat [from] those that have jointed [leg-like] extensions above its [regular] legs, with which they hop on the ground.

23 But any [other] flying insect that has four legs is an abomination for you.

Even God says there are some bugs we can eat, but he didn’t say we must. The climate crazies don’t realize that he gave mankind an outline of what we can eat. Animals with split hooves that chew their cud (like cows), birds that aren’t predatory birds, and fish that have scales and fins.

Sorry greenies, but the big guy upstairs knows all that happened from the beginning of time. He knows what will happen through the end of time. If he didn’t want us to eat the above, he would have told us they would be okay to eat. If he knew it would hurt the Earth, those foods would be forbidden, even when Moses received the law.