Is The Liberal Left Paying Attention Yet? 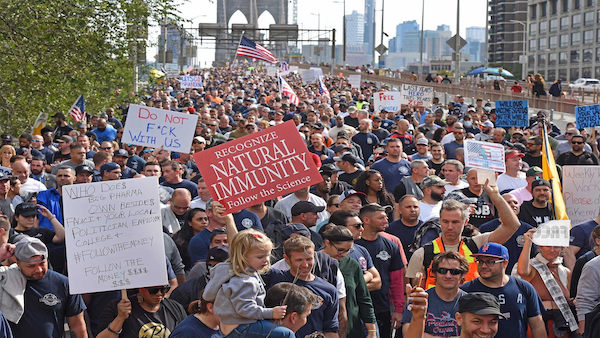 For many on the left side of the aisle, there appears to be a false yet pervasive stereotype of the anti-vaccine mandate crowd.  They see them as an amalgam of wild, unkempt Americans clutching their guns and Gadsden flags, mixed in with a few of the holistic backwoods types who use homemade deodorant as well. Brooklyn Bridge shut down

This is because the left can only see the right as inferior to them, and this gross oversimplification of the issue helps them to process the situation at a level of intensity that suits their cognitive capacity.

But they are wrong, and this ugly characterization is one of the most potent reasons for America’s current political divide.

In fact, the anti-vaccine mandate movement is a highly diverse one, embodied by Americans from all walks of life, including a vast number of first responders and healthcare workers, who are, by definition, some of the folks at the highest risk for coming into contact with COVID-19. In fact, many in the anti-mandate crowd have had their pokes, but find the government forcing people to take the vaccine un-American.

The anti-mandate people made their voices heard in New York City on Monday.

The protest, which is set to end in front of City Hall on the Manhattan side of the bridge, is billed as an anti-mandate protest on behalf of nearly 50,000 NYC employees who have yet to be vaccinated with a deadline just days away.

Traffic is shut down on the Brooklyn Bridge into Manhattan as of 11:49 a.m., according to police.

The scene was captured by a great many social media users.

COPS AND FIREFIGHTERS marching across the BROOKLYN BRIDGE saying NO to FORCED Vaccinations. And I'm hearing a lot of support out there for BRANDON. pic.twitter.com/GXNxc09S90

The NYPD and other municipal workers just blocked traffic on the Brooklyn bridge, not to protest murders, but to protest vaccine mandates.

— Read Pedagogy of the Oppressed by Paulo Freire (@JoshuaPotash) October 25, 2021

How the left is going to spin this is still a mystery, but there is no doubt that they’re going to try.