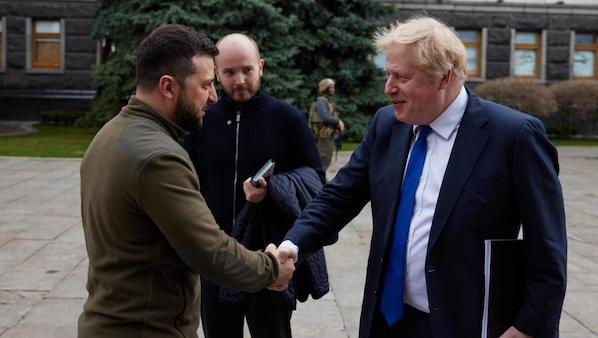 I’d imagine I wasn’t the only one who, upon seeing British Prime Minister Boris Johnson courageously ambling through Kyiv earlier this month, harkened back to the great Winston Churchill’s strolls through wartime London eight decades ago.

While Britain and Russia’s relationship hit lows not seen in two generations, Johnson visited Moscow as recently as late 2017 while serving as Foreign Secretary. And while there, he publicly declared himself “a committed Russophile.”

But Putin’s abominable actions in Ukraine ended any amicability.

Last summer, Johnson surprised many foreign policy gurus by deploying British aircraft carriers within a few miles of Crimea. This intrepid move angered the Kremlin and contrasted significantly with President Joe Biden’s reluctance to get tough on Russia, including the cancellation of U.S. Navy deployments to the Black Sea.

Despite slander and libel from the American left, Team Biden has kowtowed to Putin for years, even pressuring our military to tamp down their deterrence of Russian aggression as recently as November.

Meanwhile, since Putin’s gruesome war began nearly two months ago in Europe, Johnson has redoubled his military support for Ukraine.

London sent thousands of its next-generation light anti-tank weapon systems to Kyiv even before the war. Britain has also added anti-ship and anti-air systems to assist Ukraine’s noble efforts.

It’s no wonder we are also told Ukrainian officials now believe Johnson is their most reliable ally. While BoJo strolls through central Kyiv, Biden wastes time on climate shenanigans in Seattle and pitches failed infrastructure plans in Iowa. It’s aimless peace-through-appeasement at its worst.

Support for President Volodymyr Zelenskyy is popular in Britain, which probably helps Johnson distract from his ongoing domestic ordeals redolent of Democrat politicians in the United States.

More than two years after Britain’s withdrawal from the European Union, Johnson clearly does not wish his island to retreat from the world but rather reconstitute itself as a global power. That, thankfully, includes taking on Communist China’s noxious aims.

At least we hope it does. I bet Churchill would, too.