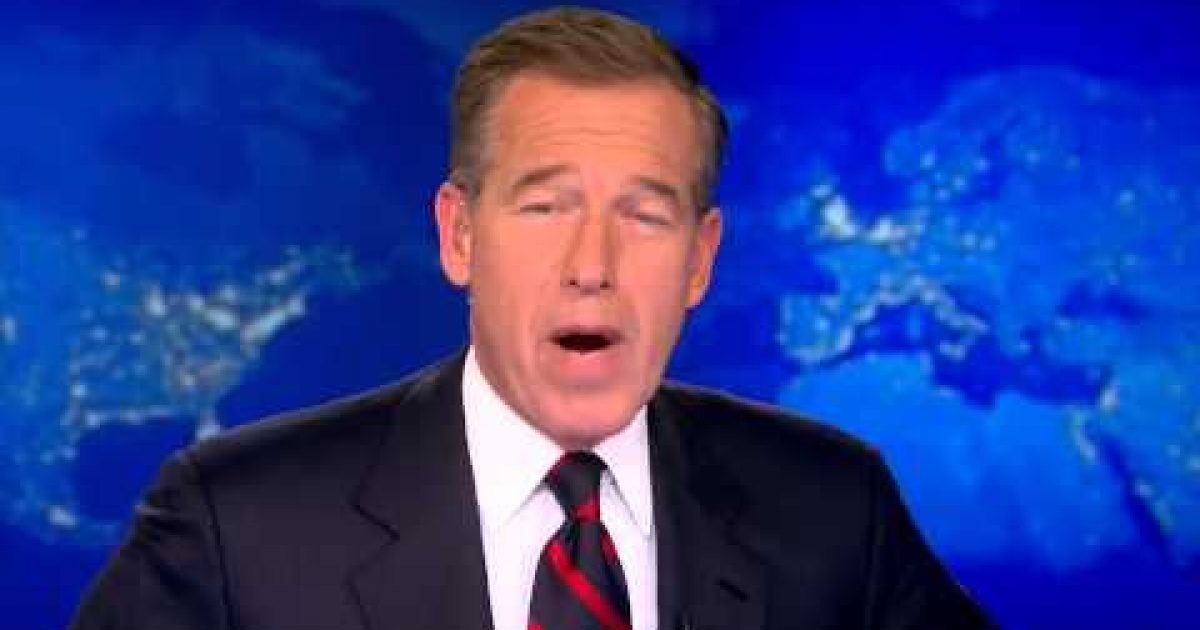 NBC Nightly News anchor Brian Williams had been repeating the story for years, but in the end he was just as brave as CT. Sen. Blumenthal during his faux service in Vietnam, or Hillary Clinton dodging phantom bullets from non-existing snipers in Bosnia. He admitted on Wednesday that he was not aboard a helicopter hit and forced down by RPG fire during the invasion of Iraq in 2003. A story he told on air as recently as this past Friday (above). As reported in Stars and Stripes:

The admission came after crew members on the 159th Aviation Regiment’s Chinook that was hit by two rockets and small arms fire told Stars and Stripes that the NBC anchor was nowhere near that aircraft or two other Chinooks flying in the formation that took fire. Williams arrived in the area about an hour later on another helicopter after the other three had made an emergency landing, the crew members said. “I would not have chosen to make this mistake,” Williams said. “I don’t know what screwed up in my mind that caused me to conflate one aircraft with another.”

That was a lie.  He didn’t mix up the two air-crafts he lied. Its not like he was in the green Chevy and confused it with the blue one. One helicopter was shot at and needed to make an emergency landing..he was on a different helicopter which showed up an hour later faced no gun fire and landed safely.  Williams can’t even apologize right! On Friday Williams began a story with, “The story actually started with a terrible moment a dozen years back during the invasion of Iraq when the helicopter we were traveling in was forced down after being hit by an RPG. “Our traveling NBC News team was rescued, surrounded and kept alive by an armor mechanized platoon from the U.S. Army 3rd Infantry.”

Williams and his camera crew were actually aboard a Chinook in a formation that was about an hour behind the three helicopters that came under fire, according to crew member interviews. That Chinook took no fire and landed later beside the damaged helicopter due to an impending sandstorm from the Iraqi desert, according to Sgt. 1st Class Joseph Miller, who was the flight engineer on the aircraft that carried the journalists.

The claim rankled Miller as well as soldiers aboard the formation of 159th Aviation Regiment Chinooks that were flying far ahead and did come under attack during the March 24, 2003 mission.

(…)“It was something personal for us that was kind of life-changing for me. I’ve know how lucky I was to survive it,” said Lance Reynolds, who was the flight engineer. “It felt like a personal experience that someone else wanted to participate in and didn’t deserve to participate in.”

Actually when Williams and the NBC News team arrived, they immediately got in the way:

Reynolds said Williams and the NBC cameramen arrived in a helicopter 30 to 60 minutes after his damaged Chinook made a rolling landing at an Iraqi airfield and skidded off the runway into the desert. He said Williams approached and took photos of the damage but Reynolds brushed them off because the crew was assessing damage and he was worried his wife, who was alone in Germany, might see the news report.

Miller, Reynolds and Mike O’Keeffe, who was a door gunner on the damaged Chinook, said they all recall NBC reporting that Williams was aboard the aircraft that was attacked, despite it being false. The NBC online archive shows the network broadcast a news story on March 26, 2003, with the headline “Target Iraq: Helicopter NBC’s Brian Williams Was Riding In Comes Under Fire.”

O’Keeffe said the incident has bothered him since he and others first saw the original report after returning to Kuwait. “Over the years it faded,” he said, “and then to see it last week it was — I can’t believe he is still telling this false narrative.”

On this broadcast last week in an effort to honor and thank a veteran who protected me and so many others after a ground fire incident in the desert during the Iraq war invasion, I made a mistake in recalling the events of 12 years ago. It did not take long to hear from some brave men and women of the aircrews who were also in that desert. I want to apologize. I said I was traveling in an aircraft that was hit by RPG fire. I was instead in a following aircraft. [One hour following] We all landed after the ground fire incident and spent two harrowing nights in a sandstorm in the Iraq desert. This was a bungled attempt by me to thank one special veteran and by extension our brave military men and women, veterans everywhere, those who have served while I did not, I hope they know they have my greatest respect and also now my apology.

A feeble apology. I can’t believe he lied about his lie. Being on an aircraft under fire is not something one can be mistaken about–and to say he got mixed up us pure malarkey. And by saying he was in a following aircraft made it sound like he was right behind the helicopter being fired at, he was one hour behind. Also he made it seem like this was the first time he made the mistake but he has been pushing the lie since he first reported it eleven years ago.

Is What The CDC’s VAERS Not Telling Us The Real Danger Of The COVID Jabs?
May 6th, 2021 Sons of Liberty Media