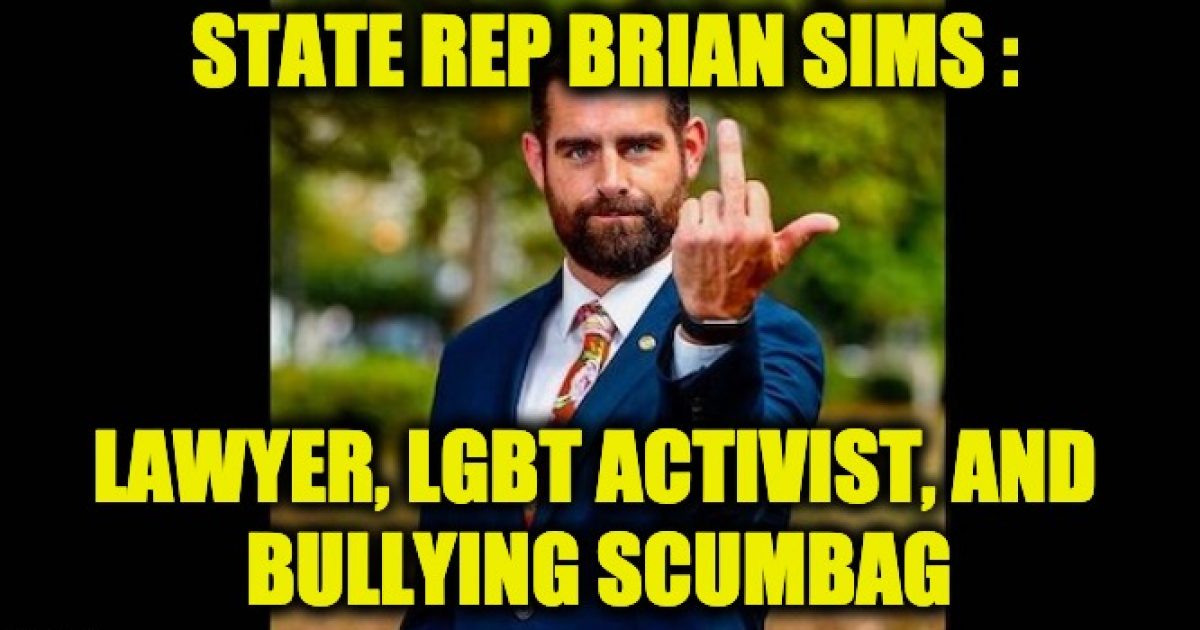 Brian K. Sims is a Democratic member of the Pennsylvania House of Representatives, lawyer, LGBT activist, and a bullying scumbag who harassed and tried to dox peaceful Pro-Life teenage girls and an old lady praying in front of a Planned Parenthood abortion clinic.

Last Thursday he posted a video of him harassing what he called “old white lady,” who was praying across the street from an abortion clinic. In another video, posted three week’s ago,  he harasses underage teenagers peacefully protesting outside an abortion clinic and offers $100 to anyone who can identify the kids.

In the video originally posted in April, tweeted by pro-life advocate Lila Rose, and Sen. Ted Cruz three weeks later, Sims approaches five people, three teen girls, one teen boy, and one adult.  He identifies them as “white people,” and “pseudo-Christian” who have there shaming young girls. One of the girls responds “We’re actually just praying for the babies, and we believe that women deserve more,” as the girls and adult leaves. Sims then gets the name of the boy and offers the cash for doxing,

In the May 2 video, which Sims live-streamed on Twitter and the Periscope app, the lawmaker can be seen approaching a woman outside of Planned Parenthood of Southeastern Pennsylvania in Philadelphia. The woman, by herself, can be seen praying the rosary as he approaches (video at the bottom of the post)

“Today’s protester, now she is an old white lady who is going to try to avoid showing you her face,” Sims begins as he points the camera toward the woman. “But the same laws, luckily, that protect her from being out here also protect me from showing you who she is. And so my hope is that you’ll donate $100 for every extra hour that this woman is out here telling people what is right for their bodies.”

“Who’d have thought that an old lady would be outside a Planned Parenthood telling people what is right for their bodies,” he said. “What you are doing here is disgusting. This is wrong. You have no business being out here.”

Shame on you! Shame! Shame! There’s no faith that tells you you are right and everybody else is wrong.

At one point when the camera appeared close, the woman turned and told Sims to get the camera “out of my face.”

“No! No!” he responded as she appeared to make a call. “You have a problem protesting in public, don’t protest in public.”

“Let’s go protest out in front of her house and tell her what’s right for her body,” he told her. “This is a racist act of judgment

That’s doxing attempt #2. Hey Sims, she was praying for all the babies black, white, etc.  She was NOT being racist, but you were being an a**hole.

“This is conduct that is certainly unacceptable and despicable coming from a state lawmaker,” said Jason Gottesman, communications director for the Republican Party of PA.  “He certainly should apologize at the very least not only to the woman but also to Pennsylvanians and voters who expect more from their elected officials,” said Gottesman.

I am extremely troubled by the fact that a man who is paid by our tax dollars feels it is appropriate to publicly shame one of those taxpayers just because he disagrees with her.

I’ll be praying the rosary at that Planned Parenthood in the near future. I better get my hair done, in case Brian comes by with his camera.

I wouldn’t be worried, Christine, Representative Brian Sims is a bully who harasses old ladies and teenage girls, you seem to have the ability to verbally defend yourself against a bully like Sims.

It’s time for the Pennsylvania Democratic Party to primary this low-life and vote this bully out of office.