Today is international “Everybody Blog About Brett Kimberlin Day,“precipitated by the domestic terrorists campaign of intimidation against conserve bloggers such as  R.S. McCain, Aaron Worthing, Liberty Chick, Patterico,  and others.  The guy even has a website dedicated to trashing Andrew Brietbart (he went after Andrew while he was alive also), Kimberlin has as site called Breitbart Unmasked which I will not grace with a link.

Stacy McCain calls  the ”Breitbart Unmasked” site Not Brett Kimberlin because of the claim that Kimberlin is not behind the site. If it isn’t Kimberlin than it must be some sort of psychic because the nameless blogger has posted details of the Kimberlin/Mrs. McCain incident which “The Other McCain” has never discussed in public or published.

Rather than give the list of all the bad things he has done, or talk about the money he as gotten from Barbara Streisand and George Soros’ Tides Foundation, Teresa Heinz Kerry and other progressive one percenters, I will focus today on some of his most violent crimes

Labeling Brett Kimberlin a terrorist is more a function of my inadequate verbal skills than his fitting in to a traditional definition of terrorism.  For me, a terrorist is someone who uses violence (or the threat of violence) against non-combatants to frighten the general public and weaken their collective wills in order to achieve some sort of political goal.  While the first part violence and frightening describes Kimberlin, there is no real political goal, he uses terror to protect himself.  He is accused of committing violent acts as part of a cover-up to avoid prosecution for other violent acts. There is no political goal, just a base criminal trying to stay out of jail. This Ponzi scheme-like reign of violence is more aptly described as narcissism than terrorism.

On July 29, 1978, Speedway resident Julia Scyphers, 65, answered a knock at her door. A man she didn’t know was standing on her stoop asking about items she’d recently tried to sell at a yard sale. She let him into the garage to look at the items and he shot her in the head.

Mrs. Scypher’s husband, Fred, 68, heard the bang and came out in time to see a car pulling out of the driveway. He would later tell police he’d gotten a glimpse of the man who’d come to the door.

The motive behind the crime would only come out later. According to police the victim believed that Kimberlin had an inappropriate relationship with one of her young granddaughters. The child’s  Mom worked for the narcissist at his vegetarian restaurant. . Grandma Julia was so concerned about the suspected  relationship she’d arranged for both of her granddaughters to come live with her.

When the police learned of the Grandmother’s protective action they began to consider Kimberlin a very likely suspect for the murder. Police suspect that Kimberlin had his associate William Bowman shoot the 65-year-old grandma for revenge. Neither William Bowman or Brett Kimberlin were tried for the crime. Bowman who was eventually arrested with Kimberlin as part of a drug bust,was picked out of a lineup by the crime’s only witness, the victim’s husband. Police  believed Kimberlin was behind it and hoped to get Bowman to reveal the connection as he faced his own trial. Sadly Fred Scypher died soon after and because there was no witness charges were dropped.

A month after the crime, toward the end of August, the police pressure on Kimberlin increased and “coincidentally”  something else began to happen in the town of Speedway. During the week of Sept. 1-6 bombs began to go off through out the town.

With each bomb there was new evidence.

They found bits of the timer, including one big enough to identify the specific brand. Only one local store sold that particular timer. Police showed the store clerks several photos and one of them picked out Brett Kimberlin. 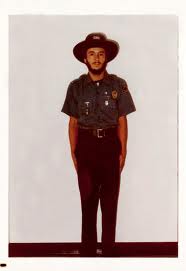 Meanwhile at a different store, a Westside print shop, the proprietor was becoming suspicious of customer who wanted to reproduce military drivers licenses. The shop owner called the U.S. Army and when the customer came back, on Sept. 20, an Army investigator was there too. The customer was wearing a security guard’s uniform with Department of Defense insignia. It was Brett Kimberlin.

This gave the bombing investigators a break because Kimberlin had violated federal law by wearing the DoD insigina. They obtained a search warrant to inspect the car he’d driven to the print shop. In the trunk they found timers just like the ones used for the bombs, and they found chemical traces of Tovex, the explosive used in the bombs.

It took take three separate trials to convict Kimberlin of the bombings. In the first trial he was found guilty of impersonating a DOD security guard but the jury was hung on all the other charge. A year later, Kimberlin was convicted of illegal possession of explosives and a hung jury on the rest.  The third trial was the charm -it took 53 days and 118 witnesses and ended with a conviction on the bombing charges on Oct. 15, 1981. He was sentenced to 50 years in prison.

There was only one death attributed to the Speedway Bombing case and it was a suicide. Carl DeLong was maimed in the killers final bombing. He lost a not only lost his right leg, but his left leg had been severely damaged also. Carl’s body was riddled with shrapnel from the bomb, which kept him in horrible pain. After 11 operations he knew he’d never get any better than that. On Feb. 23, 1983, he closed his garage door and sat in his van with the engine running. Carl’s wife Sandra (who had also been injured in the bombing), won a $1.6 million judgment against Kimberlin in civil court. see Kimberlin v. DeLong, 637 N.E.2d 121 (Ind., 1994),

Even before his release from prison 10 years ago, Brett Kimberlin had learned a lesson that has served him well: If you publicly accuse a well-known political figure of crimes or misdeeds — even without proof — publicity and money will follow.

Kimberlin, a convicted bomber and drug dealer, learned that lesson in 1988, when he claimed from his prison cell that he had been Dan Quayle’s marijuana dealer in college. The claim got a lot of attention because Quayle was running for vice president of the United States at the time.

Now, 22 years later, Kimberlin has taken that lesson and made unfounded accusations a profession of sorts. Using two popular leftist blogs, the 56-year-old from Bethesda, Md., has raised hundreds of thousands of dollars from the public and left-leaning foundations by promising to put conservatives he disagrees with in jail, often with offers of large rewards. So far — without success — he has called for the arrest of Karl Rove, Andrew Breitbart, Chamber of Commerce head Tom Donohue, Massey Energy Chairman Don Blankenship and other high-profile public figures.

Maybe that’s why rich progressives like to fund Kimberlin’s “charities” Velvet Revelation and Justice Through Music, as the fake accusation is also a standard weapon of the left, especially since Obama began to his run for the oval office. After all, are Kimberlin’s fake charges against Quayle much different than the left’s nasty habit of accusing anyone who disagrees with the president of racism?

As for Kimberlin, he continues is reign of terror, not with violence but with the threat of violence…not with criminal acts but with “lawfare” abusing the court system by filing false charges and lawsuits.  But Kimberlin is still not a terrorist, he is not using lawfare to scare people and achieve a political end. Brett Kimberlin is still a low-life criminal narcissist, littering the courts and the internet in an attempt to frighten conservatives away from his violent crimes.

Since this is Everyone blog about Brett Kimberlin Day Below are some links to Kimberlin posts put up during the past 24 hours-the list was  compiled by yours truly and by Duane Lester-The All American Blogger). I will continue to update this thoughout the day so if you want me to add your post either email it to me (yidwithlid at aol dot com) or tweet it to me (twitter handle Yidwithlid)

Please click on each of the links below and learn everything about this danger to society:

And don’t forget KimberinFiles.org where the National Bloggers Club is helping Aaron and Stacy in the immediacy and working on a potential legal defense fund to protect them, Mandy, and Patterico they can keep up their invaluable work .