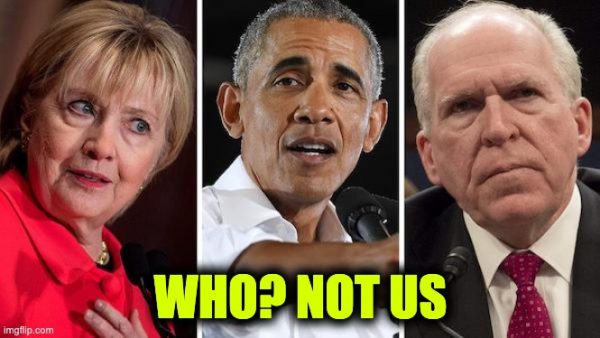 Director of National Intelligence (DNI) John Ratcliffe declassified and released John Brennan’s handwritten notes indicating that Hillary Clinton may have been behind the Russia hoax and that Barack Obama knew what was going on.

Last week  Director of National Intelligence John Ratcliffe sent a letter to Lindsey Graham and the Senate judiciary committee, explaining that a referral asking for an investigation went to then-FBI Director James Comey and Deputy Assistant Director of Counterintelligence Peter Strzok. The referral was based on information American intelligence discovered by monitoring Russian intelligence alleging that Hillary Clinton “had approved a campaign plan to stir up a scandal against U.S. Presidential candidate Donald Trump by tying him to Putin and the Russians’ hacking of the Democratic National Committee.”  The letter also informed the committee that then-President Obama was briefed on the operation.

The new release indicates the CIA first learned about the Clinton operation through the monitoring of Russian sources. And they thought it was reliable enough information to tell Obama about it in July 2016 send a referral to the FBI in September 2016 asking for an investigation.

In his notes (the first embedded document), Brennan and the U.S. intelligence community knew long before the 2016 election the Russia collusion hoax was the result of a campaign operation from Hillary Clinton’s campaign.

“We’re getting additional insight into Russian activities from [REDACTED],” Brennan notes read. “CITE [summarizing] alleged approved by Hillary Clinton a proposal from one of her foreign policy advisers to vilify Donald Trump by stirring up a scandal claiming interference by the Russian security service,” Brennan’s notes read.

The notes state “on 28 of July.” In the margin, Brennan writes “POTUS,” but that section of the notes is redacted.

“Any evidence of collaboration between Trump campaign + Russia,” the notes read.

The remainder of the notes are redacted, except in the margins, which reads:  “JC,” “Denis,” and “Susan.” ”

The notes don’t spell out the full names but “JC” could be referring to then-FBI Director James Comey, “Susan” could refer to National Security Adviser Susan Rice, and “Denis” could refer to Obama chief of staff Denis McDonough.

The FBI’s referral memo (the bottom embedded document below) informed the FBI of the agency’s concerns about potential Russian knowledge of the Clinton campaign’s plan to smear Trump as a Russian asset. The purpose of the smear was to distract voters away from the Hillary email scandal. The referral memo was sent after the FBI had started the Russiagate investigation:

“Per FBI verbal request, CIA provides the below examples of information the CROSSFIRE HURRICANE fusion cell has gleaned to date,” the memo states. “An exchange [REDACTED] discussing US presidential candidate Hillary Clinton’s approval of a plan concerning US presidential candidate Donald Trump and Russian hackers hampering US elections as a means of distracting the public from her use of private e-mail server.”

The letter was sent to Comey and Peter Strzok, so it’s no wonder that it was ignored.

Not only is this release a smoking gun as it pertains to Obama and Clinton, but John Brennan, who was calling Trump guilty at the during the Russiagate investigation, knew that he was lying.

Interestingly, according to the book “Shattered,” written by Liberal political reporter Jonathan Allen and Amy Parnes, who writes for The Hill, the Clinton Campaign hatched the Russia narrative 24 hours after her loss as an excuse for their campaign failure! After the Hillary loss, they began an incredible marketing effort with the help of every Democrat and the mainstream media. The highlights how Clinton’s Russia-blame-game was a plan hatched by senior campaign staffers John Podesta and Robby Mook, less than “within twenty-four hours” after she conceded:

What we are now learning is that the book’s wording was incorrect. The Russia hoax wasn’t hatched by Clinton and her team the right after the election–they re-hatched it.

President Trump has asked that the documents that Rep Nunes (R-CA) has requested be declassified and released.  Nunes has promised that they will be additional smoking guns.

I have fully authorized the total Declassification of any & all documents pertaining to the single greatest political CRIME in American History, the Russia Hoax. Likewise, the Hillary Clinton Email Scandal. No redactions! https://t.co/GgnHh9GOiq

Read the released documents below, and we will stay on top of the story as more documents are declassified.

Ratcliffe Declassified and Released Memo by Jeffrey Dunetz on Scribd