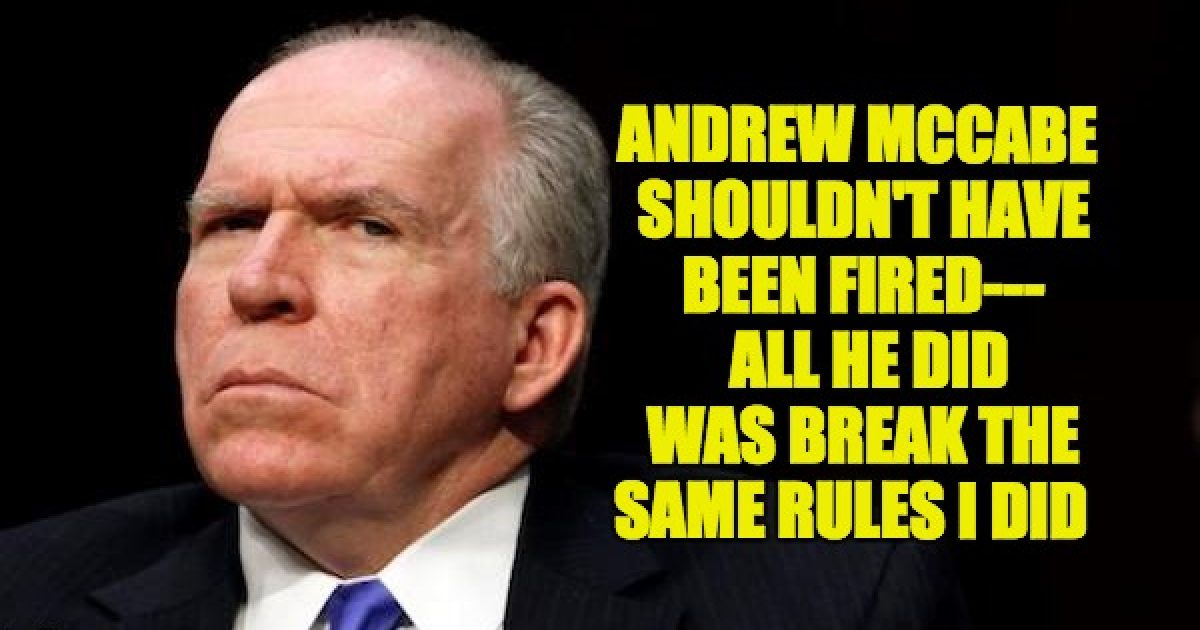 Former CIA Director John Brennan issued a tweet on Sunday accusing the President of When the full extent of “venality, moral turpitude, and political corruption” and predicting will take his,  “rightful place as a disgraced demagogue in the dustbin of history.” Brennan probably took those words from his autobiography because, while they do not apply to the President, a corrupt lack of morality is a fitting description for John Brennan’s tenure in the Obama administration.

The FBI’s OPR accused Andrew McCabe of not being honest and for leaking information.  A bit of research proves that when working for Obama, Brennan wasn’t honest and leaked information— it’s no wonder why Brennan freaked.

For example in March 2014, the then-chairman of the Senate Intelligence Committee Sen. Dianne Feinstein (D-CA) tore into Brennan on the Senate floor for spying on her fellow senators.

The CIA just went and searched the committee’s computers,” Feinstein said in a lengthy speech on the Senate floor, calling the matter a “defining moment” for the oversight of the Intelligence Committee. “I have grave concerns that the CIA’s search may well have violated the separation of powers principles embodied by the United States Constitution, including the speech and debate clause,” she said. “It may have undermined the Constitutional framework essential to effective congressional oversight of intelligence activity or any other government function.”

The man who accuses others of a lack of morality was interviewed by Democratic Party sycophant Andrea Mitchell and denied the charges.

“We weren’t trying to block anything,” Brennan said. “The matter is being dealt with in an appropriate way, being looked at by the right authorities, and the facts will come out,” he added.

“But let me assure you the CIA was in no way spying on [the committee] or the Senate.”

After four months of continued Brennan denials, the CIA Inspector General reported that the CIA had indeed spied on the Senate Intelligence Committee. Brennan apologized to Feinstein and the committee but only for the improper spying not for the lying

As Obama’s counter-intelligence adviser, one of Brennan’s responsibilities was a program designed to make up for Obama’s premature withdrawal from Afghanistan, sending unmanned drones to kill terrorists and their leaders.

In June 2011 Brennan gave a speech at the Paul H. Nitze School of Advanced International Studies at Johns Hopkins University in Washington, explaining the drone program:

…when asked whether a policy of targeted killing was appropriate for the United States, Brennan responded that the U.S. is “exceptionally precise and surgical in terms of addressing the terrorist threat. And by that I mean, if there are terrorists who are within an area where there are women and children or others, you know, we do not take such action that might put those innocent men, women, and children in danger.”

He added that in the last year, “there hasn’t been a single collateral death because of the exceptional proficiency, precision of the capabilities that we’ve been able to develop.”

However, just three months earlier in March, the NYT reported that was also a Brennan lie:

Several missiles fired from American drone aircraft on Thursday struck a meeting of local people in northwest Pakistan who had gathered with Taliban mediators to settle a dispute over a chromite mine. The attack, a Pakistani intelligence official said, killed 26 of 32 people present, some of them Taliban fighters, but the majority elders and local people not attached to the militants.

Salon reported that a study by the London-based Bureau of Investigative Journalism also provided evidence that Brennan was lying. “The findings of their study which, simply put, definitively establish that the administration’s claim about civilian deaths is patently false.  Contrary to Brennan’s public assertions, “a detailed examination by the Bureau of 116 CIA ‘secret’ drone strikes in Pakistan since August 2010 has uncovered at least 10 individual attacks in which 45 or more civilians appear to have died.”  That count — which includes numerous children — covers only the civilian deaths which the Bureau could definitively establish by identifying the victims by name.  Given how conservative their methodology was, these findings almost certainly under-count, probably dramatically, the number of civilian deaths at U.S. hands during the period about which Brennan made his claim: “at least 15 additional strikes warrant urgent investigation, with many more civilian deaths possible.”

As the counter-terrorism adviser Brennan even lied about when our Seal Team Six heroes killed Bin Laden.

“He was engaged in a firefight with those that entered the area of the house he was in,” said John Brennan, White House security adviser. “And whether or not he got off any rounds, I quite frankly don’t know … The president put a premium on making sure that our personnel were protected and we were not going to give Bin Laden or any of his cohorts the opportunity to carry out lethal fire on our forces. He was engaged and he was killed in the process.”

That didn’t happen. Bin Laden wasn’t engaged in a firefight. He was cowering behind a woman. Per Rob O’Neill the man who shot and killed the terrorist:

“I turned to the right and looked into an adjoining room,” he said. “Osama bin Laden stood near the entrance at the foot of the bed, taller and thinner than I’d expected, his beard shorter and hair whiter.

“He had a woman in front of him, his hands on her shoulders. In less than a second, I aimed above the woman’s right shoulder and pulled the trigger twice. Bin Laden’s head split open and he dropped. I put another bullet in his head. Insurance.”

There was no firefight with Bin Laden that was another Brennan lie, the terrorist went out like the coward he was.

Brennan was a vocal opponent of government leaks, like the time he spoke at a 2012 Council on Foreign Relations event. He said ” that some recent leaks of national security secrets have done serious damage, but he also lashed back at critics who have charged that President Barack Obama’s White House staff is responsible for the breaches?

“There have been some devastating leaks–I’m not going to point to any of them. So, I don’t want to validate any of the things that are out there, but it’s unconscionable what has gone out.”

But during his tenure in the Obama administration, Brennan himself was accused of leaking to the press, “John Brennan has not been absolved of responsibility for the slew of high-level security leaks that have characterized this White House,”  Senator Cornyn (R-TX) in 2013.

“There should be an investigation of what the Russians did, but also John Brennan and the hit job he seems to be orchestrating against the president-elect,” Donald Trump, King said.

“I’m not saying it didn’t happen,” that Russia interfered in the election to help Trump. “I’m just saying we’ve been given no evidence on it, when we have these stories mysteriously appearing in the newspaper,” King said.

And then there was the case of General Flynn:

Former CIA analyst Tony Shaffer also suspects Brennan as one of the leakers. He said on Fox Business Network that the leaks which forced Michael Flynn out can be laid “squarely at the feet of” Brennan, among other embittered Obama aides.

What we know is that intelligence agencies taped Flynn’s call with the Russian ambassador, and we know that the contents of the call were leaked to the Washington Post’s David Ignatius, who is a de facto stenographer for political liberals at the CIA. We also know that Brennan has made no secret of his opposition to Trump and Flynn. By opposing Brennan’s overtures to the Muslim Brotherhood and his refusal to grapple with the spread of Islamic terrorism, Flynn became enemy number one in the eyes of Obama holdovers at the CIA.

All this explains why Brennan had such a harsh reaction to Andrew McCabe’s firing because if McCabe lost his job for not being honest and leaking to the media, despite the fact that he is out of office Brennan too should face some disciplinary action….perhaps a cut in pension, or at the very least a permanent layer of duct tape covering his mouth.