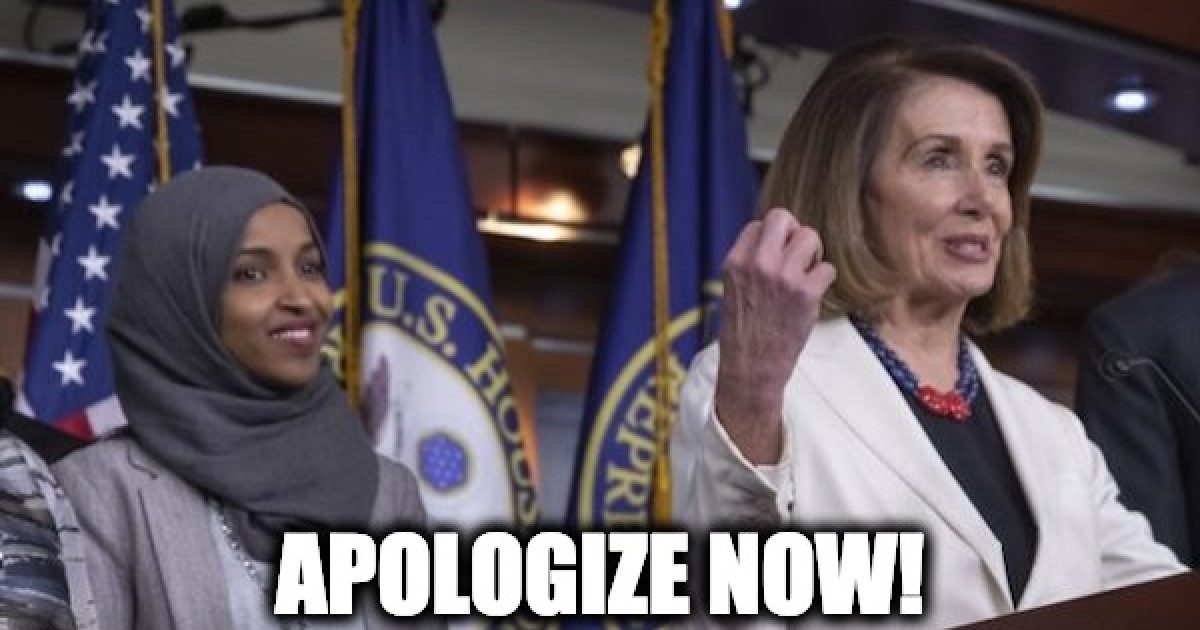 “Anti-Semitism must be called out, confronted and condemned whenever it is encountered, without exception, We are and will always be strong supporters of Israel in Congress because we understand that our support is based on shared values and strategic interests. Legitimate criticism of Israel’s policies is protected by the values of free speech and democratic debate that the United States and Israel share. But Congresswoman Omar’s use of anti-Semitic tropes and prejudicial accusations about Israel’s supporters is deeply offensive.

“We condemn these remarks and we call upon Congresswoman Omar to immediately apologize for these hurtful comments.”

I pray this isn’t just a one-time objection to the Democratic Party’s antisemitism. But it might be as it only came heavy pressure.

House Judiciary Chairman Jerrold Nadler made a passive aggressive statement while condemning Omar’s words, he blamed the Republicans, continuing his insensitivity toward Jewish causes that began with his support of the Iran deal.

“It is deeply disappointing and disturbing to hear Representative Ilhan Omar’s (MN) choice of words in her exchange with a journalist yesterday, wherein she appears to traffic in old anti-Semitic tropes about Jews and money.  Her words are deeply hurtful and offensive, particularly as they build on a previous comment she made about Jews “hypnotizing” the world in support of Israel – another old trope born of hate-filled texts like the Protocols of the Elders of Zion.

“While of course our nation’s leaders are free to debate the relative influence of a particular organization on our country’s policy-making process, or the factors that make our system of governance imperfect, there is an expectation of leaders—particularly those with a demonstrated commitment to the cause of justice and equality—that they would be extremely careful not to tread into the waters of anti-Semitism or any other form of prejudice or hate.  Rep. Omar failed that test of leadership with these comments.

“And even as this is the case, one must also note and be concerned about the concerted Right-wing tactics aimed at advancing their agenda by distracting and dividing those committed to equality and social justice.  These tactics have painted some unfairly and we must guard against this as well, because to unfairly accuse someone of a particular hatred undermines the legitimacy of the condemnations when they are truly warranted.

The statement came a few hours after a letter was sent by Reps. Josh Gottheimer (D-NJ) and Elaine Luria (D-VA.), to Democratic leaders expressing deep concern over “recent rhetoric from certain members within our Caucus, including just last night, that has disparaged us and called into question our loyalty to our nation.”

We urge you to join us in calling on each member of our Caucus to unite against anti- Semitism and hateful tropes and stereotypes,” the lawmakers wrote in the letter. “In recent weeks, we have had conversations with multiple members of our Caucus who share our concerns about this rhetoric; we have also raised these concerns with Democratic leadership.”

“We must speak out when any Member – Democrat or Republican – uses harmful tropes and stereotypes, levels accusations of dual loyalty, or makes reckless statements like those yesterday,” they added.

“We hope that our Caucus will take swift action to address these issues in the coming days by reiterating our rejection of anti-Semitism and our continued support for the State of Israel,” Gottheimer and Luria said in the letter to leadership.

The full letter is below:

Letter by House Democrats by on Scribd