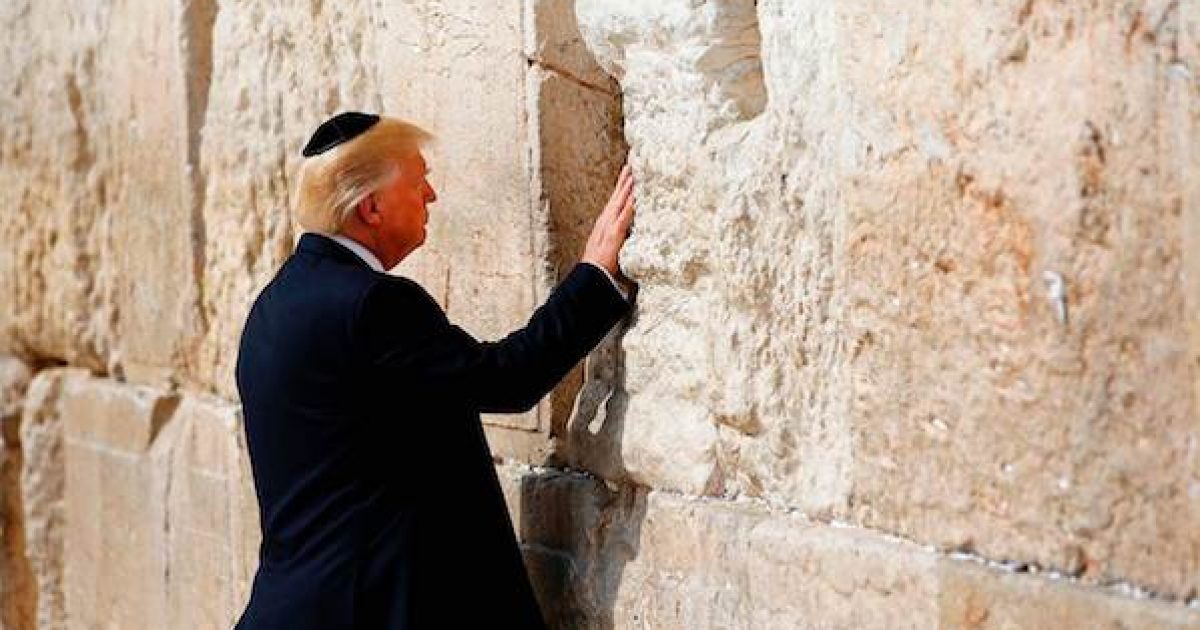 The check really is in the mail this time, Presidents Clinton, Bush #43, and even Obama gave lip service to moving the U.S. Embassy in Israel to Jerusalem, but President Trump is the first president to put the process in motion.

During a White House briefing I attended on Tuesday, Senior Government Officials confirmed that President Trump will announce tomorrow 12/6, on the 100th anniversary of the battle for Jerusalem by the British in World War One, the United States will finally Jerusalem as the Capital of Israel. The President will also direct the State Department to begin the process of moving the American embassy from Tel Aviv To Jerusalem.

The president will emphasize his rationale for the decision was to recognize the reality on the ground as opposed to the ambiguity of the U.S. policy since 1948, Jerusalem has been the seat of the Israeli government for the sixty-nine years since the creation of the modern state of Israel as it houses the Israeli Supreme Court, Knesset, and Prime Minister.

This process can take a few years as first they have to find the proper site for the embassy, followed by 3-4 years of designing and building. The Jerusalem Embassy Act Of 1995 requires the U.S Embassy to move to Jerusalem by May 31, 1999. Every six months thereafter the president is required to sign a waiver until a Jerusalem embassy opens its doors. Therefore, the President will sign and continue to sign the waiver. Failure to do so will result in massive cuts in State Dept. funding, including things like security for embassies.

In recent days President Trump spoke to key players in Congress and on the international stage, and while some of the US’s international partners may be objecting publicly, I would believe that some of those partners, Saudi Arabia for example, may be saying something different in private. The officials leading the briefing refused to confirm or deny the possibility of some of the objecting countries having a softer private stance, but they did say that no one, not one leader Trump spoke to,  said that they would walk away from the talks because of his upcoming announcement. The officials also indicated that the ongoing peace talks have made some progress which they didn’t want to disclose publicly as that would serve to scuttle the progress.

They stressed and said the President would stress that the recognition of Jerusalem and the move of the embassy would not change the rest of the American policy regarding the Israel/Palestinian issue. Per that policy:

They explained that President Trump’s actions recognize the facts on the ground while leaving room for the Palestinians to try and get what they want in Jerusalem via negotiations.

Palestinian factions announced three days of rage from Wednesday to Friday in protest of the expected announcement by Pres. Trump. And there will likely be other protests. The Senior Officials explained that in anticipation, the US has already beefed up security at our embassies in the region and elsewhere.

In fact on Tuesday afternoon, the American Consulate in Jerusalem Issued the following warning:

“With widespread calls for demonstrations beginning December 6 in Jerusalem and the West Bank, U.S. government employees and their family members are not permitted until further notice to conduct personal travel in Jerusalem’s Old City and in the West Bank, to include Bethlehem and Jericho.  Official travel by U.S. government employees in Jerusalem’s Old City and in the West Bank is permitted only to conduct essential travel and with additional security measures.  United States citizens should avoid areas where crowds have gathered and where there is increased police and/or military presence. We recommend that U.S. citizens take into consideration these restrictions and the additional guidance contained in the Department of State’s travel warning for Israel, the West Bank and Gaza when making decisions regarding their travel.”

The change in policy regarding Jerusalem is encouraging. After almost seven decades President Trump is recognizing Jerusalem as the capital city of Israel, duplicating the announcement Russia made this past April.  It is however only a first step. The move of the embassy is still only a promise.

I have always described a candidate’s promise to move the US embassy to Jerusalem as the political equivalent of telling a bill collector that the check is in the mail. With the president’s announcement, we can finally believe that the check indeed is in the mail. But we will have to wait a few years to see if the check clears, or in other words if the US embassy in Jerusalem opens for business. However, based on the way this president has kept his promises during the first year of his administration, I would not be surprised to see the check clear.