President Obama’s Foreign Policy is more like a Neville Chamberlain imitation. But you cant say it isn’t working. After he reached hand out to despots such as Ahmadinjad, shares a laugh with dictators such as Chavez and bows to the King of the repressive Saudi regime, the world has taken notice and laughs at the United States.

According to multiple sources today is North Korea’s turn to laugh at President Obama’s foreign policy. Right now a South Korean navy ship is sinking in the Yellow Sea near North Korea early Saturday, and the navy was shooting at an unidentified ship toward the north, the Korean Yonhap News Agency reported. Many South Korean sailors on the stricken vessel were feared dead. 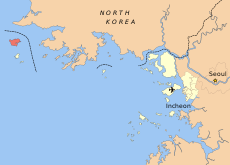 South Korea’s YTN TV network is saying the government was investigating whether the sinking was due to a torpedo attack by the North, and Yonhap news agency said the Seoul government had convened an emergency meeting of security-related ministers, but expect the South to try to defuse the situation.

The attack happened near Baekryeong Island (the darker brown on the far left side of the map) which is right near the Northern Limit Line. The line  unilaterally set by the U.S.-led United Nations military forces on August 30, 1953 after the United Nations Command and North Korea failed to reach an agreement. It is not officially recognized by North Korea.

Naval skirmishes between North and South along the Northern Limit Line have been frequent in recent years and by all indications this is one more.

It will be interesting to see what the United States does at this moment of need to stand by South Korea and show the North that provocations have consequences. Chances are he will blame it on Israeli settlements in Jerusalem.

SEOUL, March 26 (Yonhap) — A South Korean Navy ship was sinking off the west coast near its maritime border with North Korea, officials here said Friday,
Officials also said South Korea fired a shot at an unidentified vessel toward the North.

The 1,500-ton ship carrying 104 crew members went down around 9:45 p.m. near a South Korean island in the Yellow Sea, prompting an emergency meeting of security-related Cabinet ministers.

Seoul’s Navy officials refused to give details, but said a South Korean vessel fired at a ship toward the North later in the evening, indicating possibilities of a possible torpedo attack from the North. Local residents reported having heard gunfire for about 10 minutes from 11 p.m.

“The ship appears to have begun sinking after an explosion at the rear of the ship,” the Navy said in a statement. “We have been unable to find the exact cause of the incident as of this moment.”

The Navy said it has rescued 58 crew members during an ongoing rescue operation, but fears some may have died.

North Korea has said in recent weeks it is bolstering its defense in response to joint South Korean-U.S. military drills that were held this month.