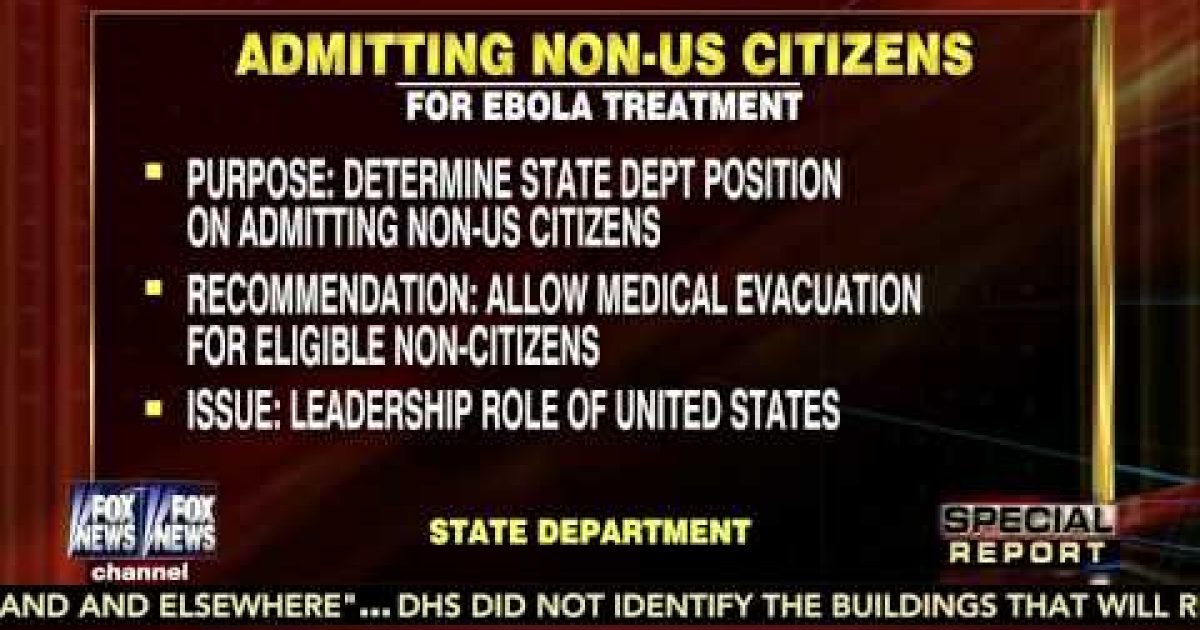 On Tuesday evening’s Fox Special Report, Mike Emanuel reported he’s obtained an internal State Department memo indicating that the Obama Administration is considering bringing non-Americans suffering from Ebola into the country for treatment. Based on the memo it is clear the State Department is recommending the action.  It is also evident that this administration is totally out of touch with the American people.

UPDATE: Adam Housley added more on the Greta program (second video below) the memo contains a detailed plan that has been seen by high levels of State Dept. people.

The video and transcript of the report follows

Emanuel: Sources indicate it is an internal memo marked sensitive but unclassified written by a State Department official. Some key points are as follows:

Purpose: come to an agreed State Department position on the extent to which non-U.S. Citizens will be admitted the United States for treatment of Ebola virus disease.

Recommendations: That State and DHS Homeland Security device a system for expeditious parole of Ebola-infected of non-citizens into the U.S. as long as they are otherwise eligible for evacuation from the Ebola-infected countries and for entry into the United States.

Issue: The United States needs to show leadership and act, as we are asking others to act by admitting certain non-citizens into the country for medical treatment for Ebola virus disease during the Ebola crisis.

One week ago House Judiciary Chairman Bob Goodlatte wrote to Secretary of State John Kerry and Homeland Security Secretary Jeh Johnson asking if either department is formulating a plan to allow non-U.S. citizens with Ebola to come to the U.S. for medical treatment. Today White House Press Secretary Josh Ernest was asked about it.

Earnest: That hasn’t happen sod far, I don’t know of any plans to do that, but we’ll look at the letter. It sounds like he [Goodlatte] sent the letter to DHS and the State Department, so you might see if they have a response to the letter.

Emanuel: I reached out to several State Department officials for guidance and so far they have not responded.

Adam Housley: This State Department memo has seen by Nancy Powell, the ambassador to India. She is leading Ebola coalition for the Department of State. Also seen potentially by Pat Kennedy Undersecretary for Management you might remember the name from some of the Benghazi decision that were made. It’s basically been cleared by the highest levels of the State Department. So when we hear in briefings that there has been no plan as far as the State Department knows they may not be telling the truth or may not be communicating with each other. This apparently has been seen at some of the highest levels.

More on the video below: