Candidate Bre Kidman Calls It The Guillotee And Warns Of Revolution

Sen. Susan Collins (R-ME) isn’t exactly what you’d call an ideological conservative, but she did anger leftists so much with her vote to acquit President Trump that she received a number of “credible” death threats.  But there’s more. On Monday, Twitchy reported that Bre Kidman, a Democrat Socialist hoping to unseat Collins in November, is now selling campaign gear adorned with a guillotine.

I was gonna wait until tomorrow to show off these beauties, but Trump got acquitted and I feel like folks could use something to look forward to. So.

Get ready for Merch-You-Can’t-Buy! You shouldn’t buy elections, so you can’t buy our locally silk screened, upcycled merch. pic.twitter.com/B0A4HSvDIw

Of course, we’re not supposed to see anything violent about this, right?  After all, guillotines are often used as comedic devices…

She also seemed supportive of a violent revolution.

We’ll be giving these shirts (& patches & buttons) to folks who talk with Mainers about our campaign to #StopElectingTheRich and #ShowUpForME.

More details on how to get your GuilloTee tomorrow! In the meantime, remember: there is not going to be a more convenient revolution.

Who is the guillotine for?

Good question.  Maybe she wants it for anyone whose political views fall to the right of Stalin.

Just flagging that one of @SenSusanCollins' Senate opponents has merchandise with a guillotine on it, presumably to cut off .. opponents heads.

We’re not really sure what else it could be used for.

Perhaps Bre’s staff should give her a history lesson.

Ultimately for the people who giggle and rub their hands in gleeful anticipation of putting people they don’t like under the blade.

But people babble about Revolution are necessarily willfully ignorant of how revolutions have historically worked out for the revolutionaries.

Hey Bre, try doing an internet search for Robespierre. His full name was Maximilien François Marie Isidore de Robespierre. Max was an attorney who liked the guillotine also. Word is that he used it on over 17,000 people. Eventually, it got too much for him. Some people say he would always have angry outbursts,  but the truth is he only lost his head once. 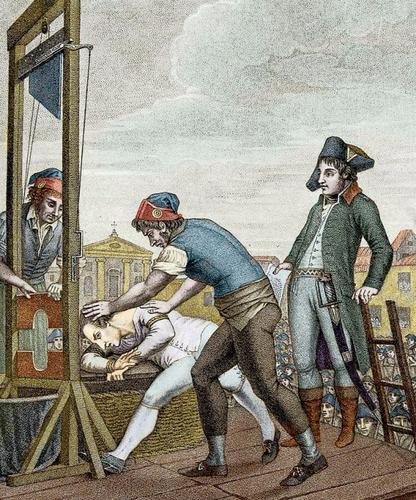 Bre notes in replies that they’re not in favor of the death penalty, but the t-shirt is more of a warning that a serious violent uprising could become “inevitable.”

To paraphrase: “No we’re not threatening to execute Susan Collins but it could happen.”https://t.co/dtEadlGXQ8

Oh, so they gave her the history lesson.

Quite a few people took Kidman to  task for the outrageous tweet:

A guillotine eh? Yeah, nothing authoritarian and scare tactic about that at all. ?

Are you going to design a shirt for Bernie’s gulags?

I know, his campaign supports guillotines, too. But all socialists can’t run on guillotines. It gets old after a while.

There’s a lot more like this, but you get the idea.

If someone in Trump World did something like that, the Resistance would be rolling out the guillotine for that person. But because it’s just a Republican being targeted with a thinly veiled threat of political violence, it won’t merit so much as a half-assed cry of outrage.

Actually, if any Republican made t-shirts like that the media would be going crazy nationally and any time any Republican was interviewed,  whether they knew the candidate with the violent shirts or not, the first question they would be asked would be about the shirts.

In February 2011, I first opined that liberalism, at its core, is an ideology of rage and hate.  These days, we’ve seen nothing but bloodthirsty rage and hate come from the left, and it’s only getting worse.

This America, IS the modern left.  Take note, and vote accordingly in November.