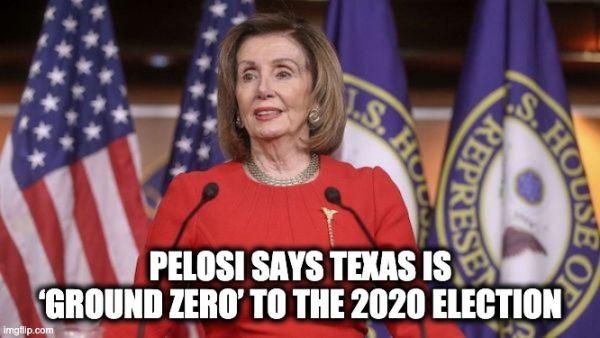 The anti-gun-rights Brady PAC is “planning to invest in Democratic candidates in Texas,” according to The Texan, removing any doubt about which way the gun control group expects those politicians to vote on Second Amendment issues.

The lengthy report quotes Brian Lemek, executive director of the PAC, who promises Brady will be “maxing out federal contribution limits on behalf of freshman Representative Lizzie Fletcher.” She represents the 7th Congressional District, the story detailed, and according to Lemek’s perspective, “Lizzie is a champion of our cause.”

This is a fact already known by Houston area gun owners, for whom nobody apparently speaks on Capitol Hill. Brady evidently wants to keep it that way.

According to The Texan, Rep. Roy is “a strong advocate for Second Amendment rights who voted against Brady PAC’s favored legislation.”

Hoping to keep the 22nd District conservative are candidates Troy Nehls, sheriff of Fort Bend County, and conservative activist Kathaleen Wall. They will face off in a July primary, the story noted.

The importance of Texas congressional races cannot be overstated, thanks to a remark by House Speaker Nancy Pelosi (D-CA), found on the “FlipTheTXHouse” website.

Lest anyone think guns are no longer an issue in the 2020 election, thanks to the coronavirus pandemic panic, a piece in the New York Times should correct that assumption. Times at-large opinion writer Charlie Warzel compares what appears to be a dulling of public alarm about the COVID-19 outbreak and the number of deaths attributed to the disease and an apparent numbness about firearms-related fatalities.

“As a country,” Warzel laments, “we seem resigned to preventable firearm deaths. Each year, 36,000 Americans are killed by guns — roughly 100 per day, most from suicide, according to data from the Giffords Law Center…”

Second Amendment activists and gun experts would quickly correct Warzel’s assumption that anyone is killed “by guns.” A firearm without someone willingly pressing the trigger is essentially a paperweight. But beyond that obvious point, blaming suicide on firearms is a non-starter.

But there appears to be something else at work here. At one point, Warzel writes, “The coronavirus pandemic and gun violence are by no means perfectly analogous calamities. The federal government, which has the power to pass stricter gun laws, has more limited powers to control states’ public health responses to Covid-19.”

Then, two paragraphs later, he complains, “And the Trump administration has largely pushed the responsibility onto states, offering an amorphous plan for reopening barely rooted in the reality of our testing and tracing capacities.”

Gun control proponents are much the same way. While they begrudgingly admit the Second Amendment doesn’t allow much, if not most, or all of their agenda, they still demand legislation aimed at erasing the right and replacing it with a regulated privilege.

Such thinking won’t pass the smell test in Texas, where more than a million citizens are licensed to carry. The gun prohibition lobby wants to turn Texas blue, but gun owners from the Gulf Coast to the Red River will be determined to stop them. November promises to provide a collision of philosophies.