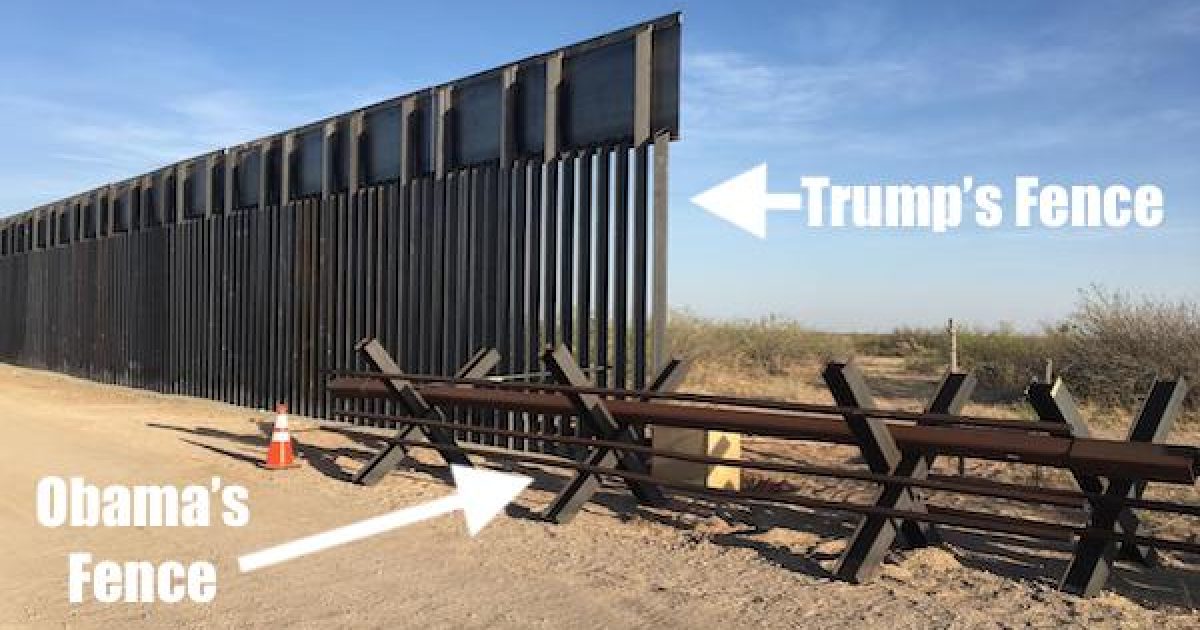 A couple of weeks ago, if memory serves correctly, a major conservative publication reported that no new border construction had been completed. This is a total lie. I actually spent a lot of time trying to find the article but it was to no avail. I remember the word “awkward” was in the title, as in “Well This is Awkward…”

But thanks to Google’s blocking of conservative news sites, I may never find the article again. Still, sometimes things stick in my craw and today I am going to set the lies straight.

I found a YouTube playlist created by “Patriot Fire”  that details some of the new construction. Patriot Fire took a road trip to visit the fence building sites.

Here are 5 videos that highlight some of the most recent construction:

CBP released this drone video of the border fence being constructed to the east Yuma, Arizona and to the east of the Mexican town of San Luis Rio Colorado. I went there on September 5th, 2019 to take a look. On the other side of the border is Mexican highway 2. The unusual thing about this project is that there are multiple sections of the fence and multiple crews working on it. There are at least four sections. By a measurement with my odometer, about 13.5 miles of new bollard fence have been built so far. I believe this will be a 20 mile stretch of fence. If there are four crews working on four different sections, the project should be completed in just a couple of months, but that’s just my guess. There may be plans to extend this fence another ten miles all the way to the Cabeza Prieta Mountains, beyond the 20 miles fence already being constructed.

On September 3rd, 2019, I went to the Yuha Desert just west of Calexico, Ca to see the construction of a new 15-mile section of 30-foot high fence that had just started 1-2 weeks earlier. With only one crew working on it at this time, it most likely takes more than a year to finish. The new fence will run from just east of Signal Mountain to the Jacumba Wilderness. It’s in Imperial County, California. Also, water stations left by the Border Angles are pointed out, which aid illegal border crossers. Apparent connections to smuggling cartels by the founder of the Border Angels, Enrique Morones, are discussed and an example video provided of the wedding on the border that he arranged for a major cartel smuggler with the Border Patrol acting unwittingly as the “honor guard”. This took place in San Diego. Morones is often allowed to air his radical open-border views on Fox News and numerous other outlets, major and minor.

San Diego has a double fence. In this Border Patrol video, two illegal crossers are caught in the middle. This is not the place they crossed, but just to give you some background. This view is from the Mexican side. In the foreground, there’s an 18-foot-high primary fence that runs for 14 miles that were just finished in August of 2019. In the background, a 30-foot-high, secondary fence is being built that runs parallel. The secondary fence is less than half finished at this point. Pointed out for comparison, a part of the 8-foot high legacy, landing-mat fence still exists here. Not that long ago it was the only fence in this area.

This clip shows the status of the border fence in Tecate, California. On August 13th, 2019, I went to Tecate to see, if they had started building the planned new fence there. Tecate is about 20 miles east of San Diego/Tijuana. There is a contract with SLSCO Ltd to build four miles of 30-foot-high bollard fence to replace the old, dilapidated landing-plate fence. I found that they had already started building the fence two months earlier. About a mile and a half of the fence had already been constructed. Another contract has been awarded to SLSCO to build eleven miles of the fence near Calexico California. See this media release by CBP for more details about the projects in Tecate and Calexico: “First Panels for the Tecate Border Wall Project Installed | U.S. Customs and Border Protection” https://www.cbp.gov/newsroom/local-me…

Shows the state of the border fence between the cities of San Diego and Tijuana. Construction of a new 15-mile secondary fence is in progress at this time and is about half-finished.

For more videos, visit the playlist at https://www.youtube.com/playlist?list=PL46vdDKMO0NxwIqs4b8wmyCNDvN2kPBCq

MOST Democrats do not really oppose Trump’s wall on principle.

They oppose the wall only because they don’t want to give President Trump a win, despite the fact that it is could for America.

In 2006 these Democratic Party Senators who are still in office voted for the Secure Fence Act: (Note: Sherrod Brown was in the House at the time but is included below because he voted for the bill)

But Donald Trump wasn’t President in 2006, so the Democrats didn’t oppose everything coming out of the oval office.

Note: While the passed bill required the building of a double fence with a road in between, Barack Obama changed that to a short fence that blocks cars but not people (see picture at top of this post)

Parts of this post were first seen at DCDirtyLaundry