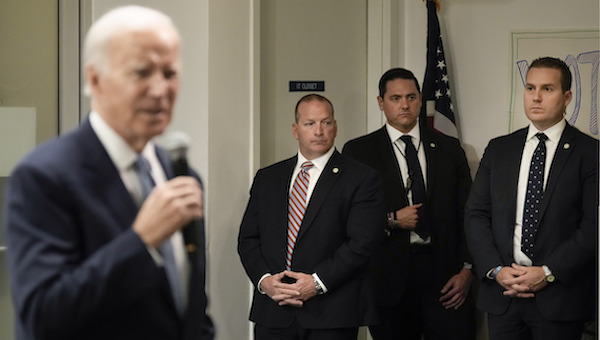 Over the years, there has been plenty of unwarranted vilification of the MAGA Movement, stemming from some wild conspiracy theories being propagated by the progressive left.  This includes several defamatory suggestions, such as the idea that the movement is just a cover for white supremacists or that there are radical, domestic terrorists invading this “America First” movement.

Now, a new book is ratcheting up the bad reputation by suggesting that President Joe Biden is paranoid about MAGA having infiltrated the Secret Service.

According to Chris Whipple’s new book, “The Fight of His Life: Inside Joe Biden’s White House,” Biden does not trust the Secret Service because some of them allegedly do not support him politically.

“A bigger problem was Biden’s discomfort with his Secret Service detail; some of them were MAGA sympathizers. He didn’t trust them,” Whipple wrote. “The Secret Service is full of white ex-cops from the South who tend to be deeply conservative.”

Whipple makes Biden appear paranoid since he assumed the Oval Office. “Surrounded by a new phalanx of strangers, Biden couldn’t help but wonder, Do these people really want me here?” Whipple said.

Biden was so paranoid, in fact, that he believed that issues with his dog Major may have been manufactured by allegedly dissident agents.

Joe Biden’s lack of trust in the Secret Service appears to be so deep that he reportedly does not believe the details of certain incidents his dog, Major, had involving agents.

Somebody was lying, Biden thought, about the way the incident had gone down,” Whipple wrote.

Major has been ordered into therapy for a reported biting of Secret Service agents. Biden has defended Major as a “sweet” animal learning to get along with the agents.

The book’s insinuation is a sinister one, certainly, and appears to compound the left’s desperate drivel about the MAGA Movement’s alleged malfeasance.