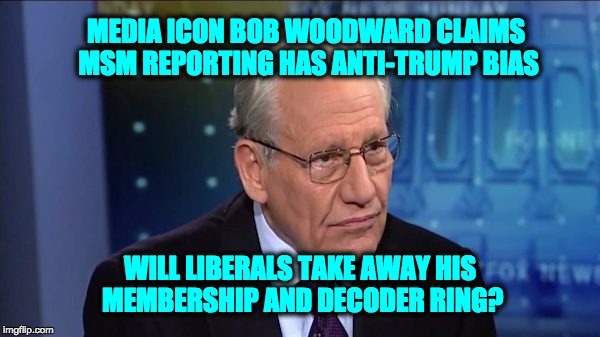 Holy Cow! Yes It’s THAT Bob Woodward:  the same guy who as a young reporter broke the Watergate story and brought down President Richard Nixon working for the Washington Post. Woodward is no an associate editor for the newspaper which has become so liberal some call it the “bible” of the progressive left. Woodward now says the media has gone overboard in its anti-Trump bias.

Knowing what side his bread is buttered on, Woodward tempered criticism of his own employer the Washington Post, which has been among the most ardently anti-Trump voices in the mainstream media, But Woodward did articulate something that most Americans agree with: the media has gone too far in their anti-Trump coverage and they’ve begun reporting on their fears rather than on the facts.

“Stick to the reporting. Stick to the reporting. You have done a great job. Of course, one of the realities here is that we’ve got an old newspaper war going between The New York Times and The Washington Post. Some very powerful stories. At the same time, I think it’s time to dial back a little bit about because there are people around — certainly not you, certainly not the reporters at the Post — who are kind of binge drinking the anti-Trump Kool-Aid. And that is not going to work in journalism. Let the politicians have that binge drinking.”

Interestingly, while Woodward praises WaPo and the two journalists from the paper sitting with him on the panel, near the end of his commentary he reminds journalists that they should never “gloat.” I say that’s interesting because just last week when the Post released their story on

This the same Washington Post that just a few years ago couldn’t contain their glee when their favorite liberal lord stopped by for a visit.

“Staff writers, photographers, editors and employees from other departments lined the hallway after word spread that the President-elect would be walking through the newsroom.” Now Kurtz: “There hasn’t been this much excitement in The Washington Post newsroom since Brad Pitt dropped by.”

One wonders how the Washington Post staff would react if President Trump stopped by for a visit this week, does anyone think their would be reporters gleefully awaiting his arrival or cheering when he stepped through their doors? Or at least would anyone show respect to the Commander-in-Chief?  Maybe Bob Woodward, but anyone else– probably not.