The Anti-Semitic Blood Libel: It’s Not Just For Passover Anymore 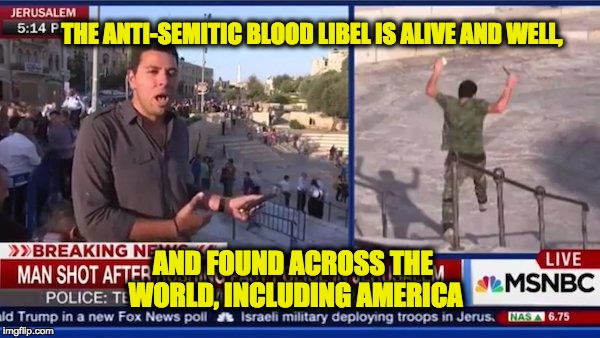 Through out Jewish history the weeks surrounding Passover has been a dangerous time for the Jews. Mostly because of the famous blood libel that matzah was made from the blood of Christian Children. Anybody who’s ever eaten matzah knows that matzah is made from a combination of sheet rock and cardboard (at least it tastes that way).

Blood libel is a term with a specific and terrible history. It refers to the scurrilous accusation that Jews kidnapped and murdered Christian children to use their blood to prepare Passover matzoh. Charges of blood libel have spurred massacres of Jews throughout the centuries; the myth was revived by Hitler, and persists today in places like Russia, the Muslim world. It even exists in the United States (in a different form) preached by people like Former President Obama, Ayman Mohyeldin and others in the mainstream media. College campuses in America, especially the most liberal tend to be hotbeds of blood libel (they don’t provide the Jewish Students with safe spaces).

Like many of the anti-Semitic actions/stories the blood libel is based on something Jews can’t do.  When the Jew-haters claim that Jews are “eating blood” one of the reasons they select that libel because the Torah forbids Jews from consuming blood. As is written in Leviticus 17:10-14:

Salting the meat is part of the Koshering process to get rid of the last traces of blood.

It started 3,500 years ago in the land of Egypt: ” we were slaves to Pharaoh in Egypt,” the story of Exodus says. The 10th and final plague hit the firstborn sons of every Egyptian. To avoid the plague Jews smeared the blood of a slaughtered lamb on the doorposts of the Jewish homes, the death passed over them.

Josephus tells us that already in Roman times, the Greeks spread rumors that the Jews slaughtered a Greek in the Temple in Jerusalem and ate his intestines as part of their rites.

The story of William of Norwich (d. 1144) is often cited as the first known accusation of European blood libel.  The Jews of Norwich, England were accused of murder after a Christian boy, William, was found dead. It was claimed that the Jews had tortured and crucified their victim. The Jews of the town were murdered.

The British blood libel spread throughout Europe. France’s first blood libel took place in Blois in 1171, 31 Jews were burned on the stake as Passover approached.

In 1840 an elderly Italian monk-priest, Padre Tommaso, and his servant disappeared in Damascus, Syria, after having visited the Jewish quarter in the city. A French consul to the Ottoman Empire, Ratti-Menton, promoted a groundless theory of ritual murder of Tommaso that the local Muslim government largely accepted. Jewish leaders were arrested and tortured. Sixty of their children were held hostage and starved to pressure their parents into confessing. One source said that four adults died from the mistreatment; another states that two died and some were permanently disabled. Most of the rest confessed involvement in a ritual murder. The consul then requested permission from the Syrian government to murder the rest of his suspects. (Jonathan Frankel, “‘Ritual Murder’ in the Modern Era: The Damascus Affair of 1840,” Jewish Social Studies Volume 3, Number 2).

That event is credited with introducing the blood libel myth to the Arab world, where it is still circulating.

Today the story changes a bit, “horrible Israeli soldiers deliberately killing children,”usually accepted by the mainstream media, progressive Democrats, much of the EU and the Arab World. The libel is spread by the media without question even though they are false.

One such blood libel the al Durah hoax, where a young child was supposedly shot by Israeli forces. The story was faked by an anti-Israel French reporting crew and was picked up by the world media. The hoax incited the second Palestinian intifada, which caused the deaths of more than a thousand Palestinian and Israeli citizens. The entire thing was staged by a Palestinian Cameraman who worked for one of the French TV Networks. The the boy was never harmed by the IDF.

In October of 2015  Israeli police shot a man who was lunging at them with a knife, but MSNBC’s Ayman Mohyeldin claimed the man’s hand was open and couldn’t be holding a knife, this was a anti-Semitic blood libel lie so blatant that host Jose Diaz’ Balart used the video Mohyeldin filed to show that it was very clear that the terrorist’s hands weren’t open and it certainly looked like he had a knife in his hand. See video below(Mohyeldin was not fired for lying on the air).

The United Nations Human Rights Council (HRC) is also famous for perpetuating the blood libel myth, by creating Human Rights charges against Israel that they don’t make against the countries that actually commit human rights violations. This is why it was disturbing when President Barack Obama decided give the Council credibility by rejoining (Bush #43 left the council because of its anti-Israel propaganda)l. It didn’t matter to the former president that the Council had already hired Richard Falk as the Special Rapporteur to the Palestinians,  Falk believes “that the Holocaust is  a massive fraud on the rest of us, with their lavish, self-financed Holocaust Museums all over America and the world. The Holocaust myth is instrumental to maintaining American support of Israel, which leads to worldwide terrorism.” Or that he claims, “Jewish people… have decided to bring down human civilization (like Sampson) ” More recently he published a paper for the UN falsely claiming that Israel practices apartheid. The report was rebuked by the UN Secretary General and U.S. Ambassador to the UN Niki Haley.

The modern version of the libel usually involves the warlike American Jews controlling our foreign policy and pushing the country into war, or the warlike Jewish State of Israel deliberately trying to kill young Palestinians.

Three days after Bush #43 went into Iraq in 2003 (and three weeks before Passover),  anti-Semite and holocaust denier Pat Buchanan came up with a new angle to the blood libel, Buchanan who is a serial Jew-hater claimed those damned jooos pushed us into war:

“For whose benefit these endless wars in a region that holds nothing vital to America save oil, which the Arabs must sell us to survive? Who would benefit from a war of civilizations between the West and Islam? Answer: one nation, one leader, one party. Israel, Sharon, Likud.” ( The American Conservative Whose War? 3/24/03)

During the ramp-up to the Iran deal President Obama seemed to agree Buchanan’s false libel.

The truth is that Prime Minister Sharon strongly recommended against the Iraq war, prophetically saying that Saddam Hussein is the west’s only check on Iran and removing the despot would allow the Iranian regime to dominate the gulf.

Author Max Blumenthal, son of Hillary Clinton buddy Sid Blumenthal often makes “blood libel accusations against Israel. His latest book Goliath includes chapters comparing Israel to the Nazis, such as “The Concentration Camp,” or “The Night of Broken Glass,” and others which are just slanderous, like “How to Kill Goyim and Influence People,” all of them reminiscent of the anti-Semitic blood libels popular in medieval Europe. F. Glenn Miller Jr., the 73-year-old avowed anti-Semite accused who shot and killed three Jews outside a Jewish community center in Kansas three years ago, was a huge fan of Max Blumenthal’s anti-Semitic rantings. Max’s writings were emailed to Hillary by his father. She sent them around to the State Department to read.

But the news media participates in the blood libel also The news coverage of the Israel war with Hamas three years ago contained elements of the “blood libel.” Palestinian civilian deaths were overstate and claimed that Israel’s response to more than 50,000 rockets was disproportionate and some even charged that Israel was targeting or ignoring civilians, instead of the truth which was that Hamas was using civilians as human shields, examples of which can be found here and here.

Even when an Israeli attack happens outside a civilian area and the terrorist group stages a death scene like they did in 2014 when a bomb landed outside the grounds of a school, President Obama and the MSM believes the staged death scene even when presented with video evidence.

A popular theme in Palestinian propaganda is that Jews are trying to destroy the world. The example below a Hamas party Minister of the Palestinian Authority Parliament accuses the Jews to of sending women with with AIDS to sleep with Muslims so they can infect Muslim men. 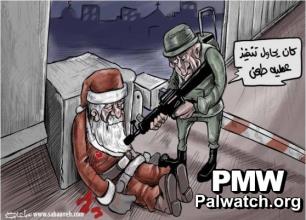 As recently as Mid-March 2017more than 200 anti-Semitic videos were hosted on YouTube, The Jewish News of Great Britain reported

There are enough examples to fill a years-worth of posts, just for the modern anti-Semitic blood libels, and it still goes on.

In the weeks leading up to and during the Passover holiday when we tell the story of how God wondrously delivered our ancestors from Egypt. The Jew haters of all forms will still be out there accusing the Jews of a lust for blood. Understand that while some will say Israel, that is simply a politically correct way of saying Jews.

Near the end of the Seder, Jews open the door to the outside the purpose of which most people say is to symbolically invite the Prophet Elijah to join the meal. But others believe the reason has more to do with the prayer which comes next:

“Pour out Thy wrath upon the nations that know Thee not, and upon kingdoms that did not call upon Thy name. For they have consumed Jacob, and laid waste his habitation. Pour out Thy rage upon them, and let Thy fury overtake them. Pursue them in anger and destroy them, from under the heavens of the LORD.”

It is unique in Jewish Prayer, we don’t normally pray for bad things to happen to bad people. Usually we pray for them to change their ways.   But Passover is the celebration of our freedom as a people, and the blood libel is now an around the year problem. Perhaps the reason to open the door and make that prayer is to make a very public show to the haters, like the slime who perpetuate the modern-day blood libel, or politicians who accept hatred in the name of votes,  that as a free Jewish people we will no longer hide and with the help of God we will never stand for your hatred.