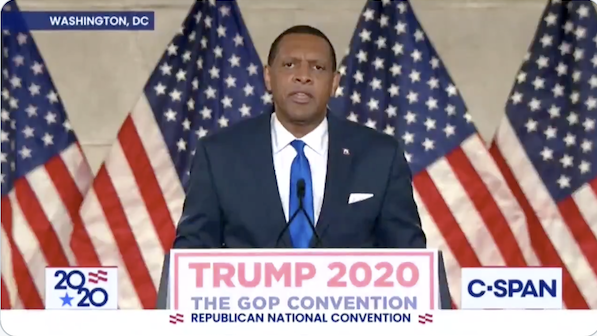 Regular readers of this site may be familiar with Vernon Jones, a member of the Democratic Party, and an African American member of the Georgia legislature who announced he was supporting President Trump for reelection back in April, saying, “There are a lot of African-Americans who clearly see and appreciate he’s doing something that’s never been done before. When you look at the unemployment rates among black Americans before the pandemic, they were at historic lows. That’s just a fact.” BLM harassed Vernon Jones

Even Vernon Jones, a black Democrat and supporter of President Trump, wasn’t safe from the mob outside the Republican National Convention (RNC) Thursday night. Jones, who was accompanied by his as he tried to navigate to his hotel, was accosted by Black Lives Matter activists and hit with insults and racist slurs.

At first, the pair seem rather collected, with his wife even smiling as she corrects one of the ignorant protesters who tells his little friends that Jones is in Congress.

Things get a little tense, however, as the mob closes around them and begins to shout expletives

Upon hearing that Jones is not, in fact, a congressman, the protester in the video responds by apologizing and offering reasoned discourse about their opposing views

Which, you have to give him credit, is two words more than his usual vocabulary arsenal

The insults from the Black Lives Matter protesters didn’t stop there.

“Are you a black Trump supporter?” one man asks Jones, confused to know that they do exist.

Another shouted, “You house [n-word]!”

Jones and his guests had to be surrounded by police using their bicycles as a wall of protection in order to eventually make their way back to the hotel.

Freedom of Thought – Not Allowed

What is it about Jones that raises the ire of fake race activists like BLM? It’s one thing and one thing only – he supports President Trump.

Jones actually addressed this in his speech to the RNC.

“The Democratic party does not want black people to leave their mental plantation,” he proudly stated. “We’ve been forced to be there for decades and generations, but I have news for Joe Biden. We are free.”

“We are free people with free minds, and I’m part of a large and growing segment of the black community who are independent thinkers, and we believe that Donald Trump is the president that America needs to lead us forward,” Jones added.

They don’t want a man like that, with that kind of message, out there roaming the streets. They’re one true goal is to introduce Communism, Marxism, and anarchy to America. They don’t care about the black community.

Where would they get the crazy notion that only certain black lives matter? From the BLM/Democrat/Media movement.

CNN Senior Political Reporter Nia-Malika Henderson slammed Jones and other black Trump supporters for speaking at the RNC, claiming they “had to testify and be Donald Trump’s black friend.”

MSNBC host Craig Melvin recently suggested Jones had to be getting paid to support the President. Because liberals cannot get it through their feeble minds that an African American would actually support a Republican president.

You feed enough of this pseudo-intellectual drivel to the public, and eventually, the low-information people comprising the BLM/Democrat/Media/Joe Biden movement will use it as a means to justify their unhinged actions.

We’re almost certain that these people in a group supporting “black lives” are unaware of the irony involved in them harassing a black man for walking down the street.