Wolf Blitzer Interview Of Mike Pence In Israel Nixed Because CNN Is ‘All Impeachment, All Of The Time’ 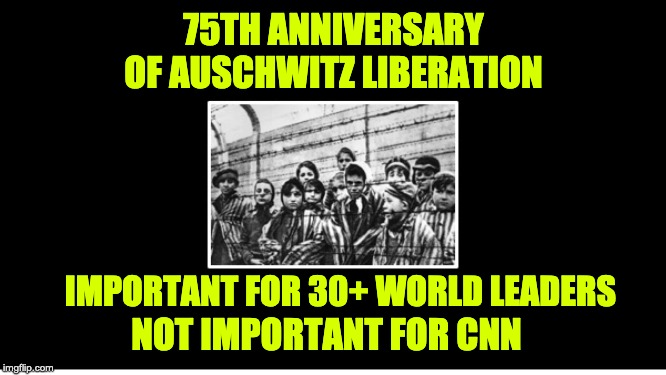 The White House had offered an exclusive Mike Pence interview to Wolf Blitzer scheduled for next Thursday at the World Holocaust Forum, where world leaders were gathering to remember the Holocaust. The exclusive interview was to mark the 75th anniversary of the liberation of Auschwitz, where Blitzer’s paternal grandparents were killed. But Jeff Zucker didn’t want to take viewer attention away from the Senate Trial.

At a time when Antisemitism is on the rise worldwide, it seems like a critical moment to commemorate, especially by someone who has lost family members at Auschwitz and is the son of a survivor.

In a 2018 interview, Blitzer spoke emotionally about his own family history. While ripping the “family separation” border policy that has been in place for quite some time, which the Trump administration has been following, Blitzer said, “My grandparents were murdered at Auschwitz. My dad survived, but two of his brothers and two of his sisters were killed. They weren’t separated to go to another facility. They were separated to die.”

Along with Pence, Blitzer would be able to schedule an interview with others in the group of at least 36 world leaders, among them three monarchs and Russian President Vladimir Putin, as well as Presidents Emmanuel Macron of France, Sergio Mattarella of Italy, and Alexander Van der Bellen of Austria. Even the UK’s Prince Charles, who has refused to visit Israel his entire life, will be at the forum.  All of whom will be in Israel’s capital for the Fifth World Holocaust Forum (WHF), this one marking the 75th anniversary of the liberation of Auschwitz by the Red Army.

Page Six reports that Wolf Blitzer had jumped at the opportunity when it was offered by the White House. However, CNN’s head honcho, Jeff Zucker, stepped in and banned Blitzer from leaving the country because of the “urgent” partisan impeachment of President Trump. Now that Speaker Pelosi has finally signed the Articles of Impeachment, appointed the managers, and delivered them to the Senate, Blitzer will be needed to lead the coverage of the upcoming Senate Impeachment trial.

The source said that the cable news network’s anti-Trump bias is keeping them from broadcasting a sympathetic interview to remember the Holocaust, and the coverage is going to be “all impeachment, all of the time” next week.

A CNN source said: “Wolf really wanted to do the Pence interview personally. He cares deeply because of his family background, which is why Wolf was offered it by the White House. But Zucker stepped in and said Wolf isn’t going anywhere because the network will be ‘all impeachment, all of the time’ next week. CNN’s anti-Trump bias is so intense, they can’t even broadcast a sympathetic interview for Holocaust remembrance.” Dozens of world leaders are expected at the forum, including Vladimir Putin and Emmanuel Macron.

A separate CNN source confirmed: “Wolf was offered the interview. We declined because the Senate impeachment trial is next week and Wolf will be leading our coverage. So he can’t be out of the country. And frankly, we wouldn’t be in a position to send any of our anchors on an overseas trip taking them off the air for days next week when the Senate trial will be underway.”

CNN can go on about being “Facts First.” But refusing an exclusive interview with the Vice President, while he is commemorating the liberation of Auschwitz is bias. Especially when the refusal is done at a time when Antisemitism both in the US and Europe is nearing levels that haven’t been seen in 75 years. Jeff Zucker can’t have somebody else on-air to cheerlead for the Democrats during one day of the senate trial demonstrates he is putting facts last.

Jeff Zucker doesn’t believe a gathering of many world leaders to commemorate the 75th anniversary of the liberation of Auschwitz, is as vital as his obsession to overturn the 2016 election. And it is an obsession. That’s proven by the fact he needs Blitzer in DC every single day.  That and of course they doesn’t want their audience to be distracted from Trump hate.

Parts of this post were first seen at Clash Daily
https://lidblog.com