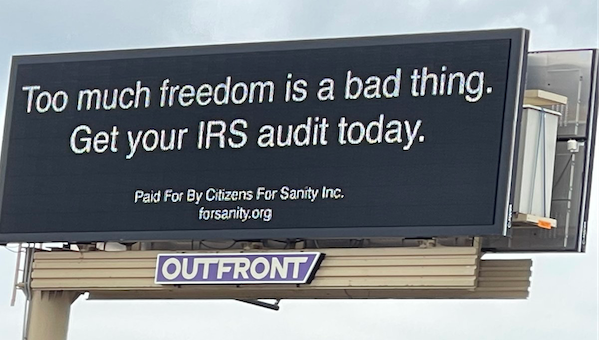 There’s a new group blasting the insanity of Democrat policies, and it’s fan-freaking-tastic.

A Republican nonprofit group, “Citizens for Sanity,” put out a 30-second ad on Twitter. It touches on one issue that has been resonating with many voters across the political spectrum — the radical gender ideology erasing women-only spaces.

In the ad, several female athletes are getting ready for a race, and a voiceover highlights the training that the girls have had and then pans to another contestant…

On Tuesday, Politico ran what was essentially a hit-piece on Citizens for Sanity titled, “Conservative nonprofit plans to spend millions bashing ‘woke’ left in midterms,” bellyaching that the group’s first ad was focused on “gender issues.”

A conservative “dark money” group is claiming that it will spend millions of dollars in the run-up to the midterm election blasting what it calls “the woke ideology of sheltered white liberals.”

Citizens for Sanity, a tax-exempt nonprofit organization working with prominent republican consultants, has begun running a television, newspaper and billboard advertising campaign in battleground congressional districts, according to details shared first with politico. This week, the organization says it will begin running a contentious six-figure tv ad blitz highlighting the issue of transgender women playing on sports teams that match their gender identity

The commercial — which was produced by John Brabender, a veteran GOP strategist who has worked for a range of high-profile republican candidates over the years — imagines a transgender athlete competing in a women’s track meet and handily defeating the competition.

Politico says the ad “imagines” a transgender athlete handily defeating the female athletes as though that hasn’t happened… when it did. And it cost some girls their shot at a scholarship.’

The ad by Citizens for Sanity shows just how insane this ideology is.

But the group isn’t just concerned about protecting women’s sport. They’re also putting up billboards pointing out various nutty leftwing policies in major cities all over the country.

Open the jails.
Open the borders.
Close the schools! pic.twitter.com/YNlSLAxz3h

If you like that, you’ll love this… they’re also trolling Democrats with photos of the cheeky billboards.

Nice! More IRS audits for us all (not Hunter) 💯 pic.twitter.com/ldXMxYAUPn

Including the Shambling Husk of Mediocrity himself, President Joseph R. Biden.

The Politico article notes that Ian Prior, a Republican operative, is serving as a strategic consultant for the group. Prior is the Executive Director of “Fight for Schools,” another successful nonprofit highlighting the way critical race theory is being used as a lens through which history and social studies are taught in K-12 classrooms. The creeping in of CRT became the central focus of Glenn Younkin’s 2021 Virginia gubernatorial campaign.

“The woke ideology of sheltered white liberals is a mortal threat to American liberty, security, and prosperity,” said Prior in a statement.

“Citizens for Sanity is not an ideological organization: we stand for reason, common sense, objectivity, equality, the neutral rule of law, and open scientific inquiry — everything the radical left now stands implacably against,” added Prior. “We are using these messaging campaigns to alert Americans to the urgent need to defeat and repudiate woke insanity before it destroys America.”

You can check out more of Citizens for Sanity’s actions at forsanity.org.

The real trick is to get some of the squishy GOP politicians to go with what the base wants.