Video-Trump’s 1st Ad Blasting Biden’s Afghanistan Disaster Was Brutal, This One Is WORSE (And True) 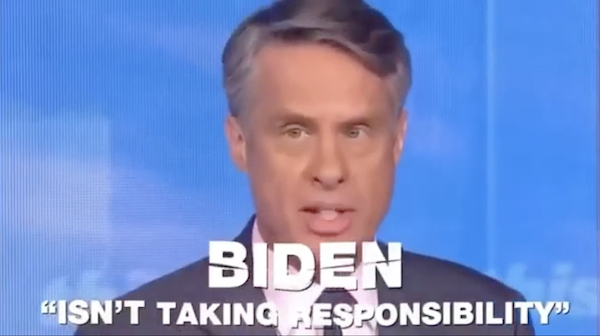 Joe Biden kicked off his presidential campaign with a video that promoted an entirely debunked lie about Trump. With Joe in office, Trump is hitting back, but he is hitting back with the devastating truth. blasting Biden’s Afghanistan disaster

In case everyone has forgotten, the video was the one he gave claiming his reason for being compelled to run for President was in direct response to Trump’s supposed support of white supremacists in the Charlottesville video.  He used all the buzzwords about bulging veins and threats to Democracy to justify his supposedly reluctant return to politics. And it was a lie Biden told during his entire campaign. Even in a Church where here people believe in that commandment about not bearing false witness. Lyin’ Joe Biden Lies In Kenosha Church, Spreads False Charlottesville ‘Fine People’ Hoax

If you don’t realize Joe’s claims were a lie, click the story linked above. We’ve made the case enough times that we’re better off pointing others to the source and going on with the real story.

Joe has proven that it’s easier to criticize a leader than to make actual leadership decisions. Proving that point may be one of the very few things he has been spectacularly successful at doing since being sent back to Washington.

With the Southern Border in disarray (including women and children dying while making their illicit journey) and Joe Biden busted in a phone call that proves everything he publicly claimed to Americans, Afghanistan’s stability was built on a foundation of lies. Even his loyal media hacks couldn’t bring themselves to cover for his ineptitude on his disorganized retreat from Kabul.

Trump took his turn dunking on Biden, highlighting the abject failures of Biden’s first few months in office. It was brutal and carried the distinct advantage of being based on actual facts. We shared it here: SAVAGE: Trump Ad Jackhammers Biden’s EPIC Failures As President (VIDEO)

But he’s released another ad that narrows the focus on Biden’s failure in Afghanistan itself.

Not long ago, a New York Post reporter asked Psaki about the White House misleading the public about the details of Joe’s dog biting visitors and staff.

Although the dog bite may seem a trivial story, the reporter pointed out that if this administration was caught being deceptive over something as meaningless as a literal dog-bites-man story, how could we possibly trust them to be straight with us over issues in which acknowledging their failures would matter?

Because the list of such failures keeps getting longer.