And The Blame For The Mass Shootings Goes To… 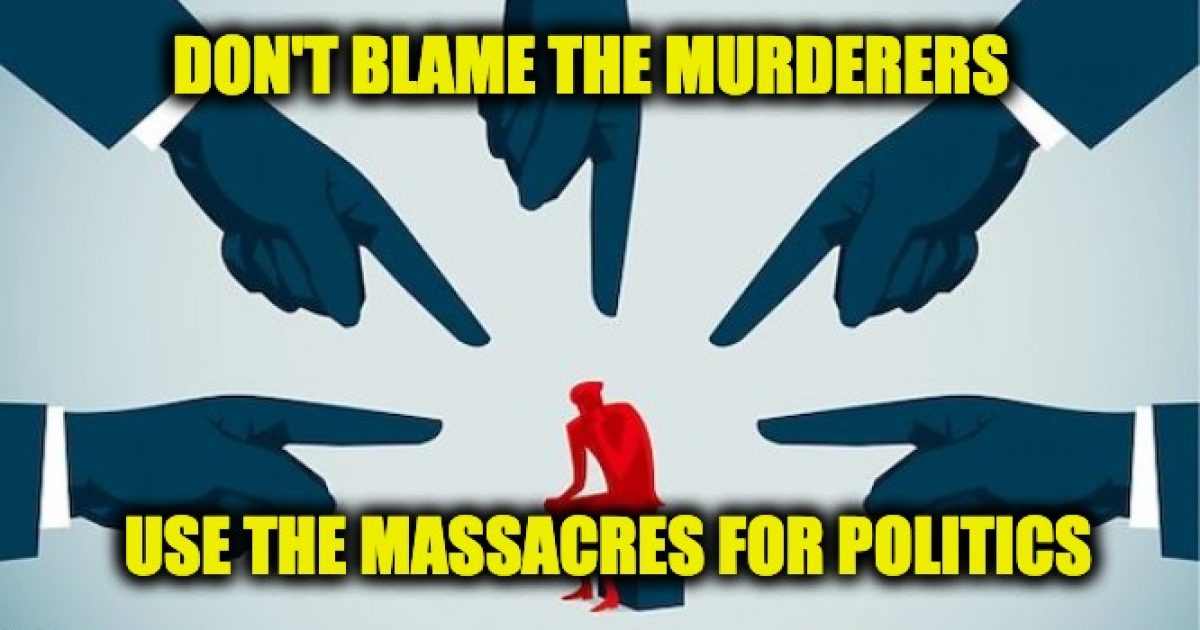 Saturday was a horrible day for America. Two mass shootings, one in El Paso, Texas, the other in Dayton, Ohio. Thirty-one people were killed and more than fifty injured. Each shooting was conducted by someone with a sick mind. I’m not a doctor, so I can’t say they are mentally ill, but for one to begin shooting and murdering like these two monsters (who will remain nameless on this site), one has to have some misfiring circuits in their cerebral computer.

Liberals were quick to place blame for the mass shootings on anyone except the two murderers. Many blamed President Trump, his rhetoric and supposed racism, others set the responsibility on video games (scientific research has shown that video games do not promote violence) or the NRA. Some blamed white supremacists even though one of the shooters is an Elizabeth Warren fan, Alyssa Milano blamed Walmart for selling guns even though except for handguns in Alaska, the chain hasn’t sold firearms in their stores since 2015. My friend Dana Loesch who’s never promoted gun violence and doesn’t even work for the NRA anymore became a target for twitter idiots including Joe Scarborough and Mika Brzezinski.

A manifesto published online has been attributed to the creep who took twenty-two innocent lives in El Paso. The manifesto claimed he hated Hispanics, however, he is talking to police and we may soon find out what’s the real motive for his sick action. It may have nothing to do with Hispanics the sicko mentioned many other things in his four-page document, some of it was reported in the NY Sun:

Mr. Trump’s is not the only language echoed in that demented document. Start with the title — “The Inconvenient Truth About Me.” Whose language is echoed there? We do not, even for a second, blame Al Gore or advocates of the Green New Deal. Yet the manifesto veers from complaining about a “Hispanic invasion” to railing about how our modern lifestyle is destroying the environment.

He attacked farming, oil drilling, plastic, paper towels and “consumer culture.”  My whole life, I have been preparing for a future that currently doesn’t exist.” The monster sounds more like AOC than President Trump, but it’s not her fault either. Nor is it the fault of all the climate alarmists at the debates last week who claimed the climate hypothesis was going to kill us all within the next dozen years.

No sooner does the manifesto start complaining about the destruction of the environment, than its author turns to blaming “corporations.” He writes like a regular Elizabeth Warren. We don’t blame the senator from Massachusetts, any more than we blame Mr. Gore — or the late Dr. Seuss, whose children’s book on the environment, “The Lorax,” is extolled in the manifesto.

His creed assailed politicians from both parties and corporations and predicted automation will lead to widespread job displacement and a growing population competing for a diminishing pool of resources.

That’s IF he wrote it because at this point the feds haven’t confirmed that it was the shooter who wrote the manifesto that was posted about a half-hour before the nut-job shot up a Walmart.

As for the other shooter:

The Dayton Daily News described that shooter as a man obsessed with death and violence. He was tossed out of High School for making a list of girls he wanted to kill, the Dayton Daily News learned in interviews with former classmates and school administrators. The school’s former principal said principal the shooter was suspended for causing a lockdown by writing a hit list on a bathroom wall. A previous suspension was caused by the school discovering the future killer had a list of female schoolmates he intended to rape.

So whose fault is it?

Truth be told the shooting had nothing to do with President Trump, video games, the NRA, Walmart, Republicans or Democrats. Nor did they have anything to do with the “dark forces” Marianne Williamson warned about during the last debate.

I know this is a radical theory, but I blame Saturday’s massacres on two people–the two monsters who took guns to public places and started killing. And to be honest, if these two sick animals couldn’t get their hands on firearms, they would have found some other weapon to kill people. In recent years people have used trucks or bombs for mass killings.

So ENOUGH of the blame for the mass shootings game. In most cases, those pointing fingers to people besides the mass murderers are doing so to exploit brutal massacres for their own political purposes and they should be ashamed of themselves.