What The Media Didn’t Tell You About Bishop Desmond Tutu 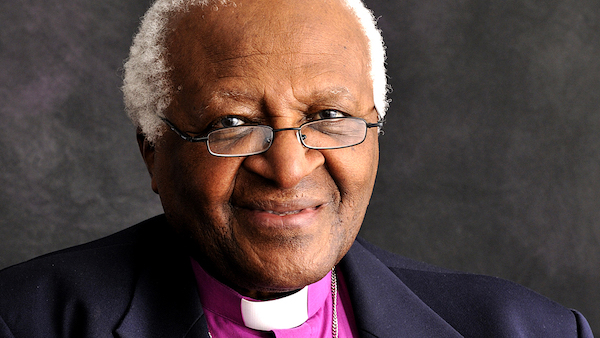 When Bishop Desmond Tutu passed away on Sunday, he was celebrated across the world as a man who led non-violent opposition to South Africa’s white minority rule called apartheid.  And he should be honored for that achievement.  But the media’s glowing praise of the Bishop left out something important, the hatred he displayed for the Jewish people.

CNN called him “the voice of justice.” the A.P. said he was a “moral conscience.” U.N. Secretary-General António Guterres said of  Archbishop Tutu, “he was a towering global figure for peace and inspiration to generations across the world.”

Those media and others like them omitted that Bishop Desmond Tutu was one of the world’s most virulent anti-Semitic voices.  He spewed anti-Jewish canards and promoted the anti-Semitic BDS movement.

“is no mere anti-Zionist …. He has minimized the suffering of those killed in the Holocaust. He has attacked the ‘Jewish’— not Israeli — lobby as too ‘powerful’ …. He has invoked classic antisemitic stereotypes … about Jewish ‘arrogance,’ ‘power’ and money …. [A]nd has accused ‘the Jews’ of causing many of the world’s problems” (“Bishop Tutu Is No Saint When it Comes to Jews,” Dec. 20, 2010, The Gatestone Institute). Tutu, impervious to facts, also has denied that Israel is a civilized democracy and unsuccessfully urged the Capetown Opera not to perform there.

How can Tutu,  a vocal defender of human rights, a fighter for the oppressed, winner of the Nobel Peace prize in 1984 when it still had meaning, be accused of being an anti-Semitic bigot?  By reading his own words.

Tutu has made some alarming statements about the Holocaust.  He has publicly complained about what he calls “the Jewish monopoly of the Holocaust.” (Jerusalem Post, July 26, 1985) Sorry Bishop, but Jews do own the copyright.  We paid for it with more than Six Million lives, one and a half million of those were little children.” Tut also asserted that “the gas chambers” made for “a neater death” than did apartheid.

During his 1989 visit to Israel, Tutu spoke at Yad Vashem Holocaust Museum in Jerusalem, Tutu urged Israelis to forgive the Nazis for the Holocaust,  a statement which the Simon Wiesenthal Center called “a gratuitous insult to Jews and victims of Nazism everywhere.” (Jerusalem Post, Dec. 31, 1989).  Holocaust survivor and Nobel Peace prize winner Elie Wiesel responded to Tutu’s call for forgiveness by saying the only ones who can forgive the Nazis are the people they killed and they can’t speak.

Anyone who has ever gone through Yad Vashem and can make a call for forgiveness has no heart. Tutu’s reaction to his tour of Yad Vashem proves that he suffered from that affliction.

Before he retired Tutu spewed vile Antisemitism worthy of the famous fraudulent Jew-hating tome “The Protocols of the Meetings of the Learned Elders of Zion,” which purports to describe a  Jewish plan for global domination.

He compared Judaism to Hitler, Stalin, and tyrants, along with bloviating the stereotype that the powerful Jewish lobby runs the U.S.

People are scared in this country [the US], to say wrong is wrong because the Jewish lobby is powerful – very powerful. Well, so what? For goodness sake, this is God’s world! We live in a moral universe. The apartheid government was very powerful, but today it no longer exists. Hitler, Mussolini, Stalin, Pinochet, Milosevic, and Idi Amin were all-powerful, but in the end, they bit the dust(Source: Monday, April 29, 2002, The Guardian UK).

Tutu accused Jews of exhibiting “an arrogance—the arrogance of power because Jews are a powerful lobby in this land and all kinds of people woo their support” (Jewish Telegraphic Agency Daily News Bulletin, Nov. 29, 1984)

After his call for “forgiving Hitler,” Tutu remarked, “If I’m accused of being anti-Semitic, tough luck.” In response to questions about his anti-Jewish bias, Tutu replied, “My dentist’s name is Dr. Cohen.” (Simon Wiesenthal Center’s Response magazine, January 1990).

Tutu basically used that age-old excuse for hatred, “some of my best friends are…”

Speaking in a Connecticut church in 1984, Tutu said that “the Jews thought they had a monopoly on God; Jesus was angry that they could shut out other human beings.” In the same speech, he compared the features of the ancient Holy Temple in Jerusalem to the features of the apartheid system in South Africa.  (Hartford Courant, Oct. 29, 1984). 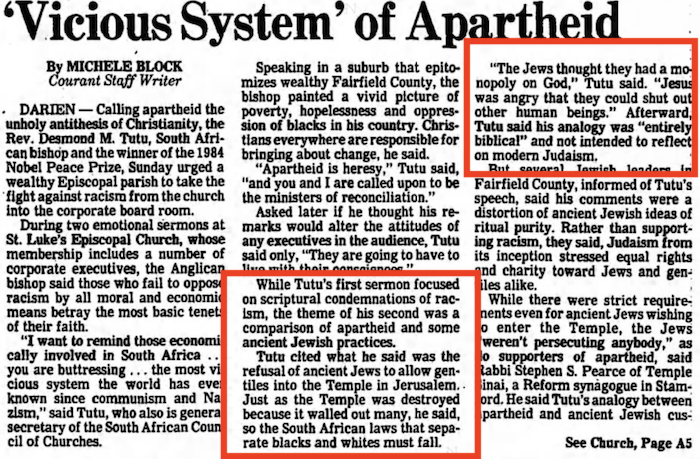 As an Archbishop Tutu knows the reasons for the destruction of the two temples to God as the “old Testament” ” is part of the Anglican canon.  He would understand that neither Jewish Temple was destroyed because gentiles weren’t allowed inside.  The first Temple, also known as Solomon’s Temple, was destroyed because the children of Israel rebelled against God by worshiping idols.  The Second Temple was destroyed because of baseless hatred between the Israelites. Unless he skipped those classes at St Peter’s Theological College, Tutu made up the story of the Holy Temples atop Mount Moriah in Jerusalem.

The anti-Jewish hatred from Bishop Tutu displayed above, left out his more extensive use of the Jewish State of Israel as his vehicle to promote his Antisemitism.  If I were to add Tutu’s support of the Antisemitic BDS movement and his opposition to the Jewish people’s right to self-determination in their historic homeland, this post would be at least three times longer.

With Tutu’s death, I pray that God comforts his family and friends.  I also pray that the media tells the truth about the man.  If he was genuinely interested in human rights, the voice of justice, or moral conscience, he wouldn’t have spread Antisemitism. Instead, he didn’t believe Jews had human rights or believed they deserved justice. His moral conscience against South African Apartheid was justified, but his lack of moral conscience about the Jewish people was unworthy of a man who claimed that he was spreading the word of God and his hatred should be included in his obituaries.