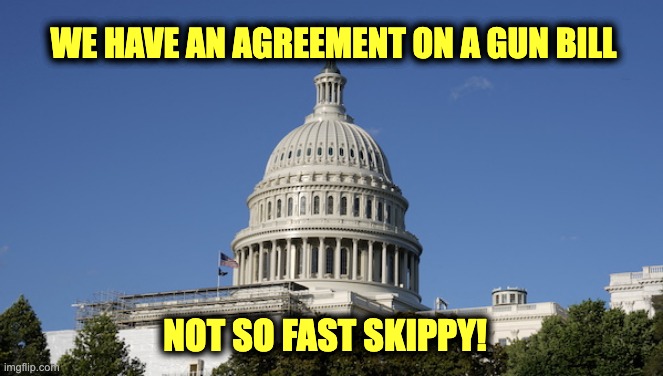 Look out your window. Do you see pigs flying? Senate Democrats and Republicans have agreed on a new gun control legislation framework. The miracle isn’t that the two parties have agreed on a new gun bill because that is not what happened. The reason for the flying pigs is that the two parties agreed on anything–besides days off. Gun enthusiasts should chill out Sunday’s announcement won’t become legislation for a very long time.

The operative word is framework. To be turned into legislation, all the details have to be filled in and agreed to by both parties, for example, what exactly triggers a red flag operation

.After negotiations and the details are agreed to by both parties, they have to be turned into legislative language. Negotiating the language may be the most challenging part of all because it means the most.

U.N. Resolution 242 was passed after the 6-Day War. The wording includes,” Israel should withdraw from territories taken during the War. The Arabs believe it means all of the disputed territories. Israel, Britain, USSR, Brazil, and the U.S. negotiators disagree. They say if it meant all the disputed territories, the wording would be “Israel should withdraw from the territories”  Since there was no the,  they thought that final borders needed to be negotiated between the parties. In other words, in a political document, just one article like the word “the” can change the entire meaning of the document. Negotiating the wording of a potential deal will not be easy.

Finally, when and If the details and wording are agreed to by the two parties (a decade from now?), the final document must be passed by the Senate and the House. Getting it passed in the house will not be easy as the leftist part of the Democratic caucus thinks any gun legislation should be stricter than the framework.

Therefore anyone who believes in the Second Amendment should not be depressed, and the anti-gun lobby should not celebrate—there is a long time before the bill will be totally negotiated and passed by congress.