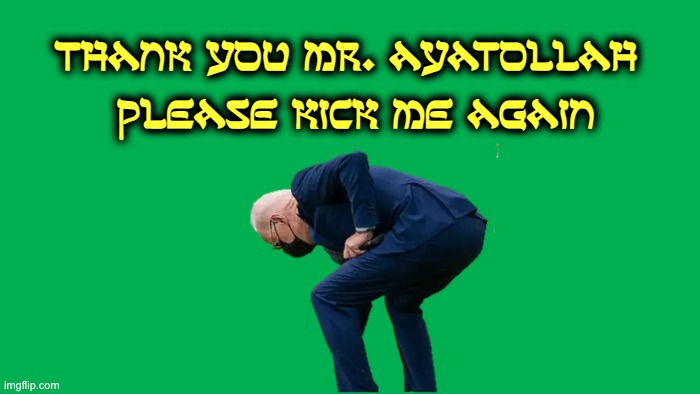 Depending on your party affiliation, Iran is either the world’s leading state sponsor of terrorism, or it is our new BFF.

The Dems know Iran is the world’s leading state sponsor of terrorism, but the ‘Beggar-In-Chief‘ is willing to overlook little details like that — or the deliberate murder of 176 passengers on Ukraine International Airlines flight PS752 — in the service of larger political objectives.

This is the same Joe Biden, mind you, who began his presidency by announcing that the Saudis were a pariah nation because of the extrajudicial killing of one person (a journalist) whose life was obviously much more valuable to Biden than 176 ordinary international civilians whose only wrongdoing was to choose the wrong place at the wrong time.

In their previous kick at the can in Iran, Obama/Biden was openly cheering on every ‘Arab Spring’ revolution except the one under a hostile regime where the ordinary people have chafed against their overlords and have a bad habit of ‘disappearing’ when they are critical of their politicians. And if you want to see how far Obama/Biden was willing to prostrate themselves (and America) to appease Iran in their ‘negotiations’ for their precious JCPOA, the pallets of cash delivered in the middle of the night were only part of the problem. Like most of what Obama and Kerry told America, the cash and everything else we were told about the JCPOA was a lie.

For more about the dollars the Dems have already paid to Iran, see:

The party that’s freaking out over a fist bump with ‘that murderer’ is really upset by the killing of one person whose name and body of work comes close to home for them. Still, they don’t seem to have anything bad to say about a nearby nation killing civilians on a much wider scale.

House Democrats blocked a resolution on Tuesday that expressed support for oppressed Iranian protesters and condemned Iran for shooting down a Ukrainian passenger plane last week that killed 176 people.

As the DailyWire reported in 2020

“Consideration and a vote on House Minority Leader Kevin McCarthy’s resolution was blocked … by a vote of 226-191,”

“What a disappointment —Democrats just blocked a vote on a resolution supporting the Iranian protestors,” House Minority Leader Kevin McCarthy tweeted. “This is not the time for partisan politics. This should be a time for the US Congress to speak with one voice to condemn an Iranian regime that kills its own people.”

All of their ‘defenders of democracy’ rhetoric is only convenient when it can be used to horsewhip Republicans, it seems. When given a chance to take a stand on Houthi terrorism, Dems go limp.

Biden removed Iran-backed Houthis from terror lists in his first month in office. How did they return the favor?

It seemed only natural that there would be a push to put them BACK on the terror watch list. Should be a no-brainer, right?

Per the  Free Beacon

The D.C. visit by the Yemeni human rights advocates was accompanied by a letter to the White House criticizing its decision to delist the Houthis and warning about the dire humanitarian crisis in Yemen that has developed. The July 11 letter, a copy of which was obtained by the Free Beacon, was signed by 35 organizations advocating for Yemeni human rights. The Biden administration removed the group from the terror list as part of a bid to help bolster U.S.-backed peace talks between the Iranian-armed rebels and the Yemeni government. Though a tenuous cease-fire is in place and expected to be renewed in August with U.S.-backing, the human rights leaders maintain the Houthis must be held accountable for their attacks on civilians.

“Unfortunately, the administration seems more focused on renewing a failed truce than on actually resolving the conflict and aiding the Yemeni people,” Dr. Wesam Basindawa, a human rights activist who participated in the meetings, told the Free Beacon. Basindawa’s delegation was organized by the Yemeni Coalition of Independent Women, a human rights organization that seeks to draw attention to Houthi atrocities and their repeated violation of the cease-fire agreement. The activists met with officials representing the U.S. special envoy for Yemen, as well as a bipartisan group of lawmakers.

Alrighty-then. What CAN we expect from the Iran administration?

Nikki Haley has something to say about that in the context of her thinly-veiled announcement of her own 2024 Presidential bid.

With negotiations over a revamped nuclear deal ongoing, Haley warned an audience of pro-Israel activists that the Biden administration is preparing to unload billions of dollars to Tehran—money that “will fund terrorist attacks on Israel and America.”
Biden has “made clear that he’ll do almost anything to get the ayatollahs to sign on the dotted line,” Haley said in a speech before the Christians United for Israel organization during its annual gathering in Washington, D.C. “And do you know who Biden allowed our lead negotiator on the Iran deal to be? Russia.” An advanced transcript of her remarks was obtained by the Washington Free Beacon.
Haley said that with Moscow’s help, the Biden administration is laying the groundwork for Iran to obtain “missiles and nukes to destroy both Israel and America.”
…
“Anything Joe Biden signs [with Iran] will all but guarantee that Iran gets the bomb. No deal is better than a bad deal,” she said. “And if this president signs any sort of deal, I’ll make you a promise. … The next president will shred it—on her first day in office.”

With our government spending gobs of money we don’t have on things we don’t need, Republicans tried to put a leash on Biden’s spending in Iran. Democrats blocked it:

Congressional Democrats killed a handful of measures that would have stopped the Biden administration from providing U.S. taxpayer funds to the hardline Iranian regime and increased economic sanctions on the country.

We’ve already given Iran billions in the past, and even John Kerry had a moment of lucidity realizing what happened to THAT money.

When asked about whether some of the $150 billion in sanctions relief to Iran would go to terrorist groups, Kerry reiterated that, after settling debts, Iran would receive closer to $55 billion. He conceded some of that could go to groups considered terrorists, saying there was nothing the U.S. could do to prevent that. —CNN, 2016

Now we want to give them MORE? They’re stringing you along, Joe.

With the way he and Obama have been giving away the store to Iran all this time, we might want to start asking whether Hunter Biden has any business connections in Tehran that we don’t know about yet. Is incompetence really enough to explain these decisions away?