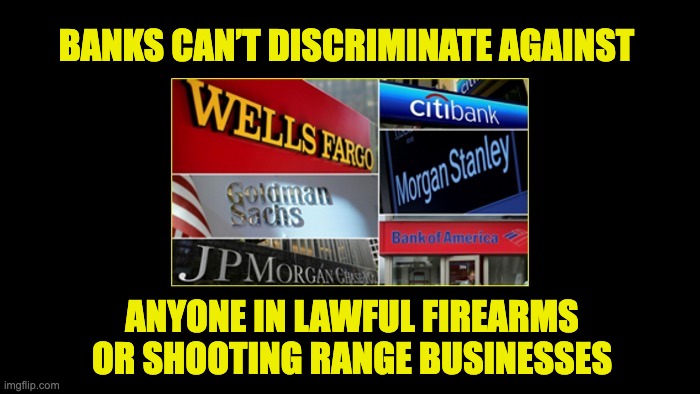 The South Dakota state Senate Commerce Committee is scheduled to hold a hearing on a bill that would prohibit state agencies or officials from entering into a contract with any bank that discriminates against people engaged in the lawful commerce of firearms and/or ammunition.  bill supporting gun industry

According to the National Shooting Sports Foundation, South Dakota gun owners are being encouraged to “reach out to your elected representatives in the legislature and to Governor (Kristi) Noem and let them know – financial industry discrimination against 2nd Amendment companies is accurate, and, South Dakota should push back.

Under terms of Senate Bill 182, “no state agency or any elected or appointed official or employee” of the state may “under any governmental authority” enter into any contract with a bank or anyone else “engaged in money transmission” that discriminates against anyone engaged in the lawful firearms business or operator of a shooting range.

A few years ago, there were efforts to discourage banks and other financial institutions from doing business with gun companies or other firearms-related businesses. This bill appears to be a state-level effort to prevent it in South Dakota.

“Following the committee hearing, on the 15th, join NSSF, our partners, and the general public in the Capitol Rotunda for hunting and shooting sports and 2 Amendment day at the Capitol,” NSSF said in a news release. “From 9 a.m. to 2 p.m., industry members like HS Precision, Stag Arms, Magpul, ONeill Ops, and Silencer Central (along with partners like the Congressional Sportsmen’s Foundation) will host displays, activities and have giveaways in the Capitol Rotunda.”

The legislation is “An Act to prohibit discriminatory actions against persons engaged in the firearms industry,” NSSF said. “The South Dakota Firearm Industry Nondiscrimination (FIND) Act asks that the State only contract with those financial service providers who commit to fairness in banking.”

According to NSSF, the firearms industry umbrella organization, “Big Banks are spending unprecedented money to lobby against our fairness in financial service bills nationally. South Dakota is no exception. Our success depends on elected leaders hearing your voice.”

“For years, NSSF® members engaged in the lawful commerce of firearm and ammunition have experienced discrimination by financial institutions simply because of the type of business they are in,” the news release said. “In these cases, the refusal to provide goods and services results in higher costs of doing business and increased prices for consumers who are simply exercising their Second Amendment Rights. Our members have faced discrimination from banks, internet search engines, payment processors, social media companies, insurance companies, and others.”