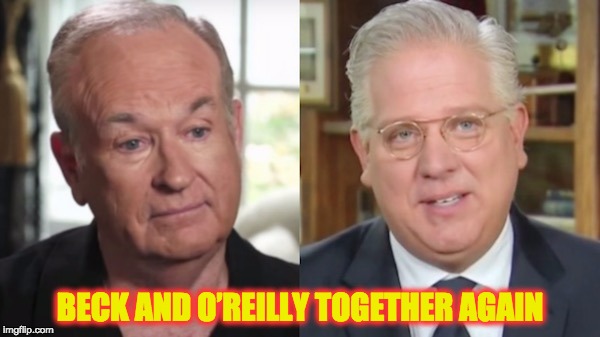 Bill O’Reilly may be down, but he’s not out and he still has a lot of friends in the TV and radio game. One of them is a former colleague at Fox News who happens to run a very successful news and entertainment network called TheBlaze. His name is, of course, Glenn Beck, and he and O’Reilly will soon be teaming up to deliver content every Friday afternoon.

O’Reilly made the announcement on the Monday episode of his podcast:

We’re going to do that every Friday until Beck gets tired of me. And it’s a good outlet for me to, you know, discuss things back and forth with Beck, who’s a good friend. We don’t agree on everything, but it’s very lively.

Beck seemingly confirmed the story with a simple tweet of an article at The Hill article that confirmed O’Reilly’s claim.

The Hill also reminded readers that Beck has long been dubious about the allegations leveled against O’Reilly, based on their past work experiences together and Beck’s opportunity to observe O’Reilly at Fox News’s studios.

O’Reilly to team up with Glenn Beck on radio | TheHill https://t.co/5kqeBwLJkz

Beck had also made known his desire to work with O’Reilly again. In fact, he made a very public plea for the recently fired Fox News host to make his new home at TheBlaze.  And he is not worried about the FNC scandal.

He had access [at Fox] to very beautiful women. We never saw him utter a word that was even blue humor. He was so buttoned up when he was around us, I find these charges hard to believe.

Now it seems that Beck will get his way, and he and O’Reilly will soon be together again. Check out Friday’s episode of Glenn Beck’s radio show to get your first taste of Beck and O’Reilly uniting their “powers for good.”