Bill Nye The Buffoon With A Bow-Tie, Proves He Doesn’t Understand Science 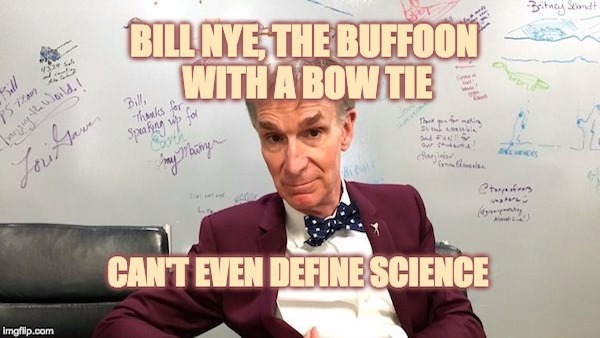 Bill Nye has done it again. The Steve Martin look-a-like contest winner, turned Kids TV star, and self-described expert in science tweeted out a definition of science so stupid that a cynical person might suggest he did it on purpose to make kids comfortable that they know more than he does:

“Science is the belief you can solve the problem.” —@BillNye #MondayMotivation pic.twitter.com/JrNUoQaGIk

Per the Oxford dictionary Science is;  The intellectual and practical activity encompassing the systematic study of the structure and behavior of the physical and natural world through observation and experiment.

And to add to the definition, real science follows a process of experimentation that must be replicable. In other words one must be able to perform the same experiment with the same methodology and materials and get the exact same results.

If Nye took “rocks for jocks” (earth science) in High School he would know the real definition of science.

Using the logic of the buffoon with a bow-tie, throwing someone in Jail is a way to solve the global warming problem. In an interview with Climate Depot’s Marc Morano, that he doesn’t mind the idea of jailing people who are skeptical of the man-made global warming hypothesis.  Nye’s attack on the First Amendment would be an extreme one for anybody. But, when one considers that the children’s TV entertainer is not a scientist and has, at times, even been ridiculed by climate experts, his comment are even more outrageous:

Morano: “We interviewed Robert F. Kennedy Jr., the environmentalists. He said climate ‘deniers’, his words, Energy CEO’s belong at the Hague with three square meals and a cot with all of the other war criminals. What is your thought on that and do you think some of the rhetoric on your side — as I am sure both sides — gets too carried away. What is your thought on jailing skeptics as war criminals?”

​Nye: “Well, we’ll see what happens. Was it appropriate to jail the guys from ENRON?”

Nye: “So, we will see what happens. Was it appropriate to jail people from the cigarette industry who insisted that this addictive product was not addictive and so on? And you think about in these cases — for me as a taxpayer and voter — the introduction of this extreme doubt about climate change is affecting my quality of life as a public citizen. So I can see where people are very concerned about this and are pursuing criminal investigations as well as engaging in discussion like this.”

Wanting to toss skeptic into the pokey makes Nye a radical believer of the unproven climate change hypothesis, despite the fact that he isn’t more qualified to speak about climate science than you, me, or  any other non-scientist. He has a B.S. in mechanical engineering from Cornell University, and worked at Boeing in the mechanical engineering department. His entry into TV was not because of any science expertise but because he won a Steve Martin look-alike contest and began moonlight as a stand-up comic by night. Eventually he quit Boeing and became a comedy writer and performer on a sketch comedy television show in Seattle, Washington, called Almost Live! The host of the show, Ross Shafer, suggested he do some scientific demonstrations in a six-minute segment, and take on the nickname “The Science Guy”.

Nye not only tries to pass himself off as a climate scientist, but once when he appeared on Bill Maher’s HBO program, he tried to pass himself off as a behavioral scientist saying that there would be no anti-Semitism in Europe if the Jews would bother to get to know their neighbors, “So, what do you do about it [anti-Semitism]? I think you get to know your neighbors. And it’s gonna take, what, does it take a century, something.”

When he is not pushing the global warming or telling Jews to be more neighborly Nye tries to teach people the Bible is false. In the past Nye has created videos explaining why he believed that creationism is bad for children, explained that Biblical story of Noah’s Ark was fiction, amongst other attacks on people’s faith. It’s okay to have ones own beliefs, but he doesn’t have to thrust his beliefs on others.

Based on his background Nye should not be presenting himself as an expert in climate science but rather,  someone with expertise in mechanical engineering, looking like Steve Martin, sketch comedy, or children’s television. The guy can’t even define science.  Thanks to the First Amendment to the Constitution, Nye has the right to present himself as anything he wishes without getting thrown in jail, the same way the Amendment protects the so-called skeptics who believe the science disproves the man-made climate hypothesis. But it would be nice if he studied up and knew how to define supposed field of science.